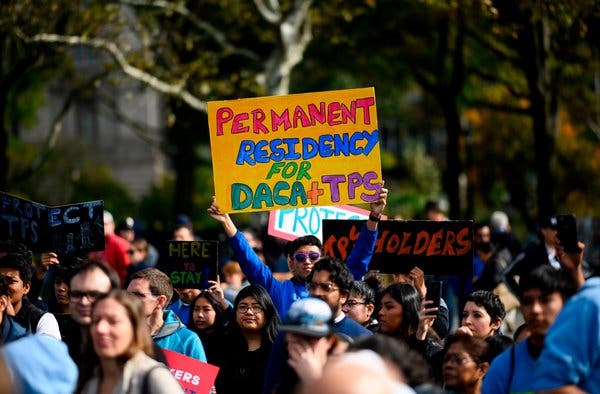 "In the four months since the Supreme Court rejected the Trump administration’s cynical effort to add a citizenship question to the 2020 census, the decision — which the president came dangerously close to defying — has faded from view under the weight of all that has happened since. The census will proceed next spring in the usual way, without sorting the country’s population into citizen and noncitizen. That’s that, it would seem.

But the decision’s work is not done. Next Tuesday, the Supreme Court will hear arguments on the validity of President Trump’s decision to terminate the program that shields hundreds of thousands of young undocumented immigrants — the Dreamers — from deportation and allows them to live openly in American society. Chief Justice John Roberts’s 5-to-4 majority opinion in the census case, Department of Commerce v. New York, is playing an important although largely unnoticed role in how advocates are framing their arguments about the fate of the program, Deferred Action for Childhood Arrivals, known as DACA.

The court’s eventual decision in the case, Department of Homeland Security v. Regents of the University of California, is obviously of vital importance to the young people who in the seven years since DACA began have been able to study, work legally and start families. But the decision will also be important in defining the court’s relationship to a president who behaves as if he has the Supreme Court in his pocket. It will indicate whether the Roberts court — more specifically, the chief justice himself — will continue to insist on believable explanations from an administration that often appears incapable of giving one.

The parallels between the two cases aren’t exact, but they are striking. Adding the citizenship question to the census was part of the Republican strategy to suppress the response in immigrant-heavy communities and skew the data that feeds into redistricting. When challenged, the Commerce Department claimed it needed the citizenship information to help the Justice Department better enforce the Voting Rights Act, an explanation that Chief Justice Roberts said “seems to have been contrived.” It was, he observed, “incongruent with what the record reveals about the agency’s priorities and decision making process.”

The chief justice’s opinion made it clear that the court was addressing process, not substance: “We do not hold that the agency decision here was substantively invalid. But agencies must pursue their goals reasonably. Reasoned decision making under the Administrative Procedure Act calls for an explanation for agency action. What was provided here was more of a distraction.”

“Reasoned decision making” was glaringly absent from the administration’s rollout of the decision to terminate DACA. Shortly after taking office, President Trump assured DACA recipients that they could “rest easy” because his policy was going to be to “allow the Dreamers to stay.”

Immigration hard-liners in the administration got to him, and within months, Attorney General Jeff Sessions, among the hardest of the hard-liners, sent a one-page letter to the acting head of the Department of Homeland Security, Elaine Duke, telling her that DACA was illegal and had to be ended. She complied with a formal announcement the next day. (Oddly, the president continued to tweet his support for DACA recipients, asking, for example: “Does anybody really want to throw out good, educated and accomplished young people who have jobs, some serving in the military? Really!”)

While the reasoning that undergirds the administration’s insistence that DACA is not simply undesirable but actually illegal remains obscure, it’s likely that this tack was intended to save face for the president: As much as he would like to be generous, this argument implies, the law just won’t let him. It also shifts accountability from the administration to the court for the huge disruption, both personal and economic, that will occur if DACA is ended.

Groups of plaintiffs across the country filed lawsuits, promptly winning rulings from Federal District Courts in New York, Washington, D.C., and San Francisco. All three courts found that the repeal was “arbitrary and capricious” in violation of the Administrative Procedure Act. The court in Washington offered the secretary of Homeland Security, who by then was Kirstjen Nielsen, the chance to elaborate on the reasoning that the court found deficient. She reiterated that DACA was “contrary to law,” adding that the department was justified in revoking it proactively to avoid “the threat of burdensome litigation that distracts from the agency’s work.” Further, she said, it was “critically important” for her department “to project a message that leaves no doubt regarding the clear, consistent and transparent enforcement of the immigration laws against all classes and categories of aliens.” Those reasons, the court found, were no more satisfactory than the initial rationale.

As with the census case, the DACA case (actually three cases combined into one administration appeal) reaches the Supreme Court as a question of procedure, not substance. No one is arguing that DACA must remain a permanent fixture of immigration law. The issue is whether the administration handled its termination in a manner consistent with basic principles of administrative law.

“The reasoned explanation requirement of administrative law, after all, is meant to ensure that agencies offered genuine justifications for important decisions, reasons that can be scrutinized by courts and the interested public,” asserts the brief for New York and the 15 other states that joined it as plaintiffs. That sentence is a quotation from Chief Justice Roberts’s opinion in the census case.

The administration’s core argument is that the decision to end DACA is not reviewable in court in the first place, that it is the type of decision that is “committed to agency discretion” and so not open to challenge under the Administrative Procedure Act. As the plaintiffs’ briefs point out, that is a strange argument, because if the administration is right that DACA was illegal from the start, then ending it is a matter of legal compulsion rather than discretion; in any event, legality is quintessentially a question for judges.

It’s hardly a surprise that the administration’s brief barely mentions the chief justice’s census opinion, cherry-picking a few quotations that, lacking context, appear to run counter to the opinion’s ultimate conclusion. But that’s not to say there is silence about the census case on the administration’s side of the argument. Three conservative legal scholars have filed a brief that can only be called a Dear John letter — as in John Roberts. The thrust of the brief, written by Ronald Cass and filed on behalf of himself, Christopher DeMuth Sr. and James Huffman, is that the chief justice’s census opinion was an unfortunate one-off that should have no bearing whatsoever on future cases. (Although this brief is labeled rather coyly as “in support of neither party,” the three concede that “our analysis generally accords with arguments favorable” to the administration.)

The chief justice’s conclusion that the official reason for the citizenship question was a pretext was a “peculiar ground for decision” that “threatens to greatly expand the occasions for inquiry into the motives of administrators,” Mr. Cass, a former dean of the Boston University School of Law, writes in the brief. That would be “a change that would invite challenges that almost certainly would enmesh courts in the very sort of inquiries that this court warned against” in cases dating to the 1930s (an odd baseline, since the Administrative Procedure Act was not enacted until 1946). The court should adhere to its “traditional reluctance to examine the motives of administrative decision makers exercising legally granted authority,” the brief continues, given the “threat to constitutionally separated powers if reviewing judges seek to plumb the motives of officials in coequal branches of government.”

But the chief justice can redeem himself, the brief implies, by isolating his census opinion so that it can’t infect other cases. The brief claims that whether the census decision actually leads to disaster “depends critically on whether this court views that decision as setting a pattern for a broad set of cases or as addressing a truly exceptional situation.”

And that’s really the question on the table, it seems to me. Something is indeed exceptional, but what?

Is it the census case, with its ham-handed lies by the secretary of commerce and the late-breaking revelation of a Republican operative’s real game plan? Or the notion that with a wave of a hand, the president or the henchmen who do his immigration handiwork can eject some 700,000 productive young people from the only home most of them have ever known? Or is it the Trump administration itself that is truly exceptional — and if so, what is the Supreme Court going to do about it?"