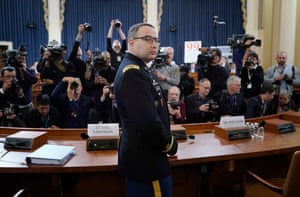 "His family fled Ukraine when he was three and found refuge in the United States. He enlisted in army alongside his brothers, was wounded by a roadside bomb during a 2003 combat deployment in Iraq, and was later awarded a Purple Heart. He went on to earn a master’s degree from Harvard in Russian, eastern Europe and Central Asian studies and served at US embassies in Kyiv and Moscow.


But a fateful call between the president of the adopted country that he serves and the president of the country where was born has put Lt Col Alexander Vindman at the center of the historic House impeachment inquiry.
Vindman entered the velvet-draped hearing room on Tuesday to testify in the inquiry against Donald Trump wearing his dark blue Army dress uniform, his chest decorated with medals and ribbons.
“I never thought I would be sitting here testifying in front of this committee and the American public about my actions,” Vindman, who still serves as the top Ukraine expert on the National Security Council, said over the ritual flurry of flashes and clicks that followed his every movement.
In the weeks since Vindman first testified privately that he was so alarmed byDonald Trump’s efforts to pressure Ukraine to smear his political rivals that he reported the president – twice – to his superiors, the decorated war veteran has become a political Rorschach test for the impeachment inquiry. Where the president’s critics saw a patriot, his supporters saw a “deep state” saboteur.
The colonel, in staccato delivery, stated that he was motivated to act only out of a sense of duty. He said he was proud to follow in the footsteps of “distinguished and honorable public servants” who have endured “vile character attacks” for testifying before the committee in defiance of the White House. He was not a “Never Trumper,” he insisted. He was “Never Partisan”.
“Dad, my sitting here today, in the US Capitol talking to our elected officials is proof that you made the right decision forty years ago to leave the Soviet Union and come here to the United States of America in search of a better life for our family,” he said. “Do not worry. I will be fine for telling the truth.”
But Vindman posed a problem for Republicans, whose strategy until that moment had been to accuse the witnesses who have passed the review in the investigation of hearsay. Both witnesses who testified on Tuesday morning – Vindman and Jennifer Williams, an adviser to the vice-president, Mike Pence – were on the 25 July call between Trump and Ukraine president Volodymyr Zelenskiy.
So Republicans went on the attack.
The president and his allies accused Vindman, without evidence, of being a “Never Trumper”. Conservative TV hosts and commentators questioned his loyalty, even going so far as to insinuate he might be a spy for Ukraine. On the eve of his testimony, the Republican senator Ron Johnson accused him of being a member of a “deep state” working to undermine the president. And while he testified on Tuesday, the White House assailed Vindman from its official Twitter account.
Devin Nunes, the top Republican on the intelligence committee, saw no reason why Vindman might have been concerned. Indeed, he saw no reason for Vindman to be there at all. In his first comments at the hearing, he welcomed viewers to “today’s circus”, “farce” and “drug deal” designed to “overthrow a duly elected president”.
“Mr Vindman,” Nunes said, starting his line of questioning.
Vindman leaned into his microphone before he could finish.
“Ranking member,” he said. “It’s Lt Col Vindman, please.”
Nunes acquiesced, but moments later the Republican congressman Chris Stewart, veteran of the air force, revived the matter.
“Do you always insist on civilians calling you by your rank?” Stewart asked, after drawing attention to his dress uniform - a “great reminder of your service” – while noting that “you wear a suit” to the White House.
“The attacks I’ve had in the press and [on] Twitter have kind of … marginalized me as a military officer,” Vindman replied, haltingly.
Nearly every back-and-forth with the minority party brought a new line of attack. Steve Castor, the counsel for the Republicans on the committee, seemed to imply that Vindman harbored dual loyalties when he pressed the colonel on whether he considered accepting job offers to serve as defense minister of Ukraine.
“I’m an American,” Vindman replied. “I came here when I was a toddler. I immediately dismissed these offers – did not entertain them.”
Mike Turner, a Republican of Ohio, appeared to accuse the witness of inflating his status within the White House. And Jim Jordan, another Ohio Republican, who was dispatched to the committee to serve as Trump’s attack dog, raised questions about Vindman’s judgment and job performance. Ever prepared, the army officer read from a glowing July performance review.
Jim Himes, a Democrat from Connecticut, laced into the Republicans for accusing Vindman of “espionage and dual loyalties”.
“That may have come cloaked in a Brooks Brothers suit and in parliamentary language but that was designed exclusively to give the rightwing media an opening to question your loyalties,” Himes said, addressing Vindman. “It’s the kind of thing you say when you’re defending the indefensible.”
As Vindman’s testimony neared the end, Sean Patrick Maloney, a Democrat from New York, asked the witness to reread the message he delivered to his father in his opening statement. He obliged.
His father was “deeply worried” about his son’s testimony before Congress on matters related to the president of the United States, Vindman explained. Having spent the first 37 years of his life in Ukraine when it was still under the thumb of the Soviet Union, Vindman said his father reflexively understood that in some parts of the world such an act would carry the “ultimate risk”.
Why, then, do you have the confidence to “tell your dad not to worry?” Maloney asked.
“Congressman, because this is America,” he replied without hesitating. “This is the country I have served and defended, that all of my brothers have served. And here, right matters.”
From the back of the Longworth hearing room, members of the public broke into spontaneous applause. It seemed, if only for a fleeting moment, that Vindman was right.

But beyond these columned walls – in American living rooms and TV green rooms, online and on social media, where his “truth” was being condensed and repackaged, analyzed and distorted, memed and mocked – there was little agreement over what was right – and even less agreement over whether it mattered."