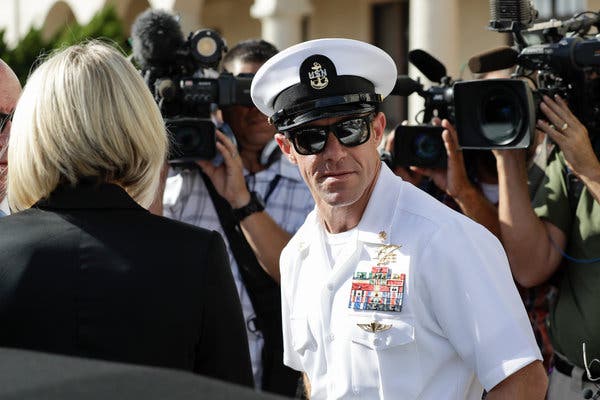 "WASHINGTON — President Trump ordered the Pentagon not to remove a Navy SEAL at the center of a high-profile war crimes case from the elite commando unit, Defense Secretary Mark T. Esper said Monday.

Mr. Esper’s confirmation of the order from Mr. Trump is the latest turn in an extraordinary series of events that pitted the president against his senior military leadership over the fate of Chief Petty Officer Edward Gallagher, the SEAL who was convicted of posing for photographs with the body of a teenage Islamic State captive in American custody.

The Navy wanted to oust Chief Gallagher from the commando unit. Instead, it was the Navy secretary, Richard V. Spencer, who was fired on Sunday. Mr. Esper accused Mr. Spencer of not telling him that he was negotiating a separate deal with the White House, which differed from what Mr. Spencer was saying publicly and to senior Defense Department leadership.

On Monday, Mr. Esper indicated that the military would follow Mr. Trump’s wishes.

“I spoke with the president on Sunday,” Mr. Esper told reporters at the Pentagon. “He gave me the order that Eddie Gallagher will retain his Trident pin.” The pin designates membership in the elite unit.

This was the second time Mr. Trump had made known his wishes that Chief Gallagher remain a Navy SEAL — the first was last Thursday, via Twitter. But Navy officials said over the weekend that they did not consider tweets to be orders and announced they were moving ahead with disciplinary hearings that could oust Chief Gallagher from the commando unit.

Those hearings will not be happening now, Defense Department officials indicated.

Following this weekend’s rapid-fire developments in an already complicated story, some Pentagon officials remained torn on Monday deciding whose side of the story to believe, according to a Defense Department official.

Mr. Trump’s intervention into the military justice system and the Defense Department’s maneuvering to avoid confrontation with the White House had some in the building confused as to what actually happened regarding Mr. Spencer’s dismissal, the official added.

Chief Gallagher was accused of shooting civilians, murdering a captive Islamic State fighter with a hunting knife in Iraq and threatening to kill SEALs who reported him, among other misconduct.

His court-martial ended in acquittal on those charges, but he was convicted of one charge of bringing discredit to the armed forces by posing for photos with the teenage captive’s body.

The Navy demoted him, but Mr. Trump earlier this month reversed that demotion, angering Navy officials, including the commander of the SEALs, Rear Admiral Collin Green, and Mr. Spencer, the Navy secretary.

In a letter acknowledging his termination on Sunday, Mr. Spencer said that he regarded good order and discipline throughout the Navy’s ranks to be “deadly serious business.”

“The lives of our sailors, Marines and civilian teammates quite literally depend on the professional execution of our many missions, and they also depend on the ongoing faith and support of the people we serve and the allies we serve alongside,” the letter said.

He added: “Unfortunately, it has become apparent that in this respect, I no longer share the same understanding with the commander in chief who appointed me, in regards to the key principle of good order and discipline. I cannot in good conscience obey an order that I believe violates the sacred oath I took.”