No leadership and no plan: is Trump about to fail the US on coronavirus testing? | US news | The Guardian 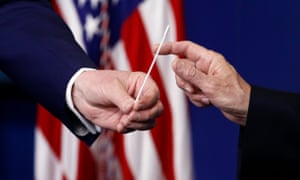 by in New York

A broad coalition of US health systems has mobilized to ramp up coronavirus testing in a national effort on a scale not seen since the second world war. But declarations of false victory by the Trump administration and a vacuum of federal leadership have undermined the endeavor, leading experts to warn that reopening the US could result in a disaster.

Interviews with agents on the frontlines of the coronavirus battle – lab directors, chemists, manufacturers, epidemiologists, academics and technologists – reveal as diverse an application of the legendary American ingenuity as the century has seen.

Test kit manufacturers are running production lines around the clock to triple their output, and triple it again. A private healthcare institute in California has constructed a mega-lab to process thousands of tests daily and deliver the results by text message alert. In smaller labs across the country, microbiologists improvise each day to fill unpredictable supply chain gaps that might leave them without swabs one day, and without crucial chemicals the next.

“It’s incredible what we’ve done together over a short period of time,” Donald Trump said at a White House briefing this week, praising his administration’s response to the pandemic.

But analysts say that without centralized governance and coordination, the national effort remains a competing coalition of state and local outfits hampered by duplicated work, competition for supplies, siloed pursuits of non-transferable solutions and red tape that leaves some labs with testing backlogs and others with excess capacity.

All of which leaves the US without a unified, coherent strategy for testing and contact tracing to contain a virus that does not respect state borders and has already killed more than 60,000 Americans.

Without it, the imminent experiment of reopening the country could be catastrophic, warned Harvard epidemiologist Michael Mina in a conference call with reporters this week.

“My concern is that we’ll end up right where we have been, with major cities having healthcare systems that get overrun quickly because of major outbreaks,” Mina said.

Meanwhile, as states begin to relax social distancing measures, the Trump administration is spreading dangerous misinformation, denying persistent supply shortages, underestimating the number of Covid-19 cases and exaggerating the margin of safety conferred by the current volume of testing and contact-tracing, experts say.

“We’ve done more than 200,000 tests in a single day,” Mike Pence said at a taskforce briefing this week, in which Trump touted testing as “one of the great assets that we have” in reopening the US.

But at current testing levels, with only rudimentary plans for contact tracing for new cases, the US will be flying virtually blind as it reopens, said Glen Weyl, a technologist who co-authored a report issued by Harvard’s Safra Center for Ethics that calls for 5m tests a day by early June.

“No, definitely not, you can’t open up with that number,” Weyl said of Pence’s announcement. “It’s not even remotely in the right ballpark. It’s off by a factor of 10.”

Testing is one of the biggest challenges the coronavirus crisis poses. And as Asian countries that have succeeded in temporarily containing the virus have shown, testing strategy is entwined with the need for contact tracing and isolating confirmed and suspected Covid-19 patients.

There are multiple categories of tests with multiple different modes for sampling, storage and transport. A test might detect the virus itself, detect traces of the virus or detect the body’s reaction to having had the virus. The experience of being tested could be different in each case. One patient might have his or her sinuses probed by a swab at a drive-thru, while another might spit in a tube at home and another give a blood sample at a clinic.

Each test has a different degree of reliability, with different amounts of time and labor required to complete the boomerang curve of sample collection to testing to result report.

“We have too many [brands of] tests, and now there are a lot of people who are committed to their tests and they run their tests on their platforms,” said Paul Reider, a renowned research chemist in the pharmaceuticals industry who teaches at Princeton University.

“If we had an effective administration – this is where the federal government comes in – they could essentially turn around and say, ‘What we would like to do is, we want one test, maybe two, that are fast, that are accurate, that are scalable and transferable, .

“You want a gold-standard test.”

In the US, regulatory and administrative hurdles are everywhere, with clinics unable to send samples to private labs that might be out of their usual networks, a lack of protocols for reporting testing data, slow regulatory approval for the use of alternative testing materials, insufficient federal funding to support lab efforts and no central leadership steering the country’s massive laboratory apparatus.

“We don’t have a system that’s ever been built for surveillance, for wide-scale population surveillance or wide-scale testing for people who aren’t presenting to the hospital or the clinic,” said Mina. “The demand is just so much larger than our system was built for.”

The Trump administration’s response to this complicated thicket has been to declare the federal government a “supplier of last resort” and wish the states luck. “It’s pretty simple,” Trump has said. “They have tremendous capacity. We hope to be able to help out.”

In an attempt to meet the demand they have encountered, lab scientists have improvised constantly, substituting materials where possible or stacking testing platforms from different manufacturers – Roche, Qiagen, Abbott, Hologic, DiaSorin – so that if one goes down another can take its place.

The result is that labs have delivered an unprecedented number of tests in record time – but with a fraction of the potential efficiency that could be achieved through better coordination, said Reider.

“If Jared Kushner wanted to do something decent, and Vice-President Pence, they could try to standardize and distribute nationally a global test,” said Reider. “At least make it available and let people choose if they want to use it.”

The Harvard report called for the establishment of a “Pandemic Testing Board” “akin to the War Production Board that the United States created in World War II”. The director of the Center for Infectious Disease Research and Policy (CIDRAP) at the University of Minnesota calls for a new Marshall plan to stand up testing in the US.

But no efforts to create such a central authority are apparent, said Michael Osterholm, CIDRAP director, who described a shortage of reagents, or chemicals used in testing, on his Osterholm Update podcast this week.

“We have had a number of our testing laboratories unable to get the needed reagents they could’ve and should’ve had to increase testing,” Osterholm said. “We really need a Marshall plan where the federal government and the private sector get together and decide what are the challenges, what can we do to quickly boost these reagents, what can we do to actually increase the reagent pool?”

‘Running towards a moving target’

Demand signal or no, some big private sector players have already moved aggressively. Early on in the crisis, Color, a private healthcare institute that does genomic testing in California, resolved to stand up a mega-lab that is now on the verge of processing 10,000 tests a day, with a goal of expanding that capacity by an order of magnitude, said Othman Laraki, CEO.

The company has since partnered with the city of San Francisco to provide Covid-19 testing for all private-sector and nonprofit essential employees, as well as any resident with symptoms who cannot find testing elsewhere. Next-day results are delivered via email and text-message alerts.

Vials with samples taken for the coronavirus are counted before they are prepared for RNA testing at Tulane University in New Orleans, Louisiana, on 2 April. Photograph: Gerald Herbert/AP

Vials with samples taken for the coronavirus are counted before they are prepared for RNA testing at Tulane University in New Orleans, Louisiana, on 2 April. Photograph: Gerald Herbert/AP

“Our thinking was that you needed to have a few massively scaled labs as opposed to having a big sprinkling of small-scale labs,” Laraki said. “We believe that’s the way to build the type of capacity that’s needed really to bring the country back to work.”

In Minnesota, academics at the state university partnered with scientists at the Mayo clinic, one of the country’s premier labs, to deliver on a challenge by governor Tim Walz to stop coronavirus in the state with comprehensive testing and contact tracing.

“We just made the decision that we’re probably going to be on our own and that we need to be ready to care for our patients,” said Tim Schacker, vice-dean for research at the University of Minnesota and an architect of the project.

As a first step, the scientists invented a molecular test “that was mostly independent of the supply chain problems”, Schacker said.

Robin Patel, the president of the American Society for Microbiology, said supply chain issues continue to represent a daily challenge for laboratories, from swabs to chemicals to materials used to extract viral RNA and amplify DNA.

“The situation has changed, yes, but it’s a different situation every day, so using the word ‘improved’ is I don’t think appropriate,” she said.

A man rides a skateboard in Savannah, Georgia, on 25 April. Photograph: Chandan Khanna/AFP via Getty Images

A man rides a skateboard in Savannah, Georgia, on 25 April. Photograph: Chandan Khanna/AFP via Getty Images

To celebrate America’s reopening, Trump appears to be preparing to hit the road, with plans to visit warehouses and factory sites to advertise the economic comeback he has promised. “We built the greatest economy the world has ever seen,” Trump said this week. “And we’re going to do it again. And it’s not going to be that long. OK?”

Polling indicates that a majority of Americans does not share Trump’s optimism. About two in three Americans think restrictions on restaurants, stores and other businesses are appropriate, and 16% on top of that wanted tighter restrictions, a poll this week from the Washington Post and the University of Maryland found.

Top epidemiologists believe it’s possible that the US could get some kind of reprieve from the virus in the warmer months ahead. If that happens, the summer could feature the scenes Trump has dreamed about, of packed churches, humming factories, crowded beaches and sold-out flights.

But Trump’s dream that the virus will simply disappear is just that – a dream, epidemiologists say.

“I hope that over the course of the next few weeks to two months, we’re going to actually see a substantial reduction in transmission,” Osterholm said. “And if it does, it shouldn’t be interpreted that we won, or that somehow we’re in control.

“I hope that the case numbers continue to decrease over time, but I’m also very, very aware that they’re coming back, and we just have to remember that.”

No leadership and no plan: is Trump about to fail the US on coronavirus testing? | US news | The Guardian
Posted by John H Armwood II at 10:21 AM