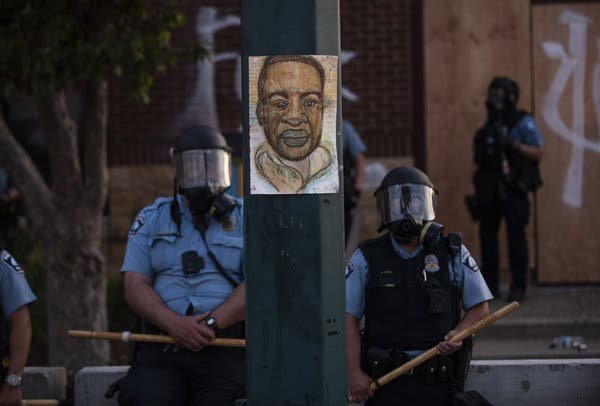 A Minneapolis police officer, who was filmed kneeling on George Floyd’s neck for nearly nine minutes until the life left his body, has been fired, arrested and charged with third-degree murder and manslaughter. That is a step toward justice. Those who take a life should face a jury of their peers. But the rarity of the arrest, the fact that police officers who brutalize or even kill other people while wearing a badge so seldom end up facing any consequences is an ugly reminder of how unjust America’s legal system can be.

Demonstrations in nearly a dozen cities, some of which turned violent, erupted in response to the killing of Mr. Floyd. At least seven people were shot in Louisville. Windows were broken in the state capitol of Ohio. And a police station was set ablaze in Minneapolis, where National Guard troops will again patrol the streets on Friday. The president tweeted early Friday that “when the looting starts, the shooting starts,” which frames the problem backward. It is not a defense of torching a Target to note that police abuse of civilians often leads to protests that can spiral out of control, particularly when met with force.

Police officers don’t face justice more often for a variety of reasons — from powerful police unions to the blue wall of silence to cowardly prosecutors to reluctant juries. But it is the Supreme Court that has enabled a culture of violence and abuse by eviscerating a vital civil rights law to provide police officers what, in practice, is nearly limitless immunity from prosecution for actions taken while on the job. The badge has become a get-out-of-jail-free card in far too many instances.

In 1967, the same year the police chief of Miami coined the phrase “when the looting starts, the shooting starts” to threaten civil rights demonstrators, the Supreme Court first articulated a notion of “qualified immunity.” In the case of police violence against a group of civil rights demonstrators in Mississippi, the court decided that police officers should not face legal liability for enforcing the law “in good faith and with probable cause.”

That’s a high standard to meet. But what makes these cases nearly impossible for plaintiffs to win is the court’s requirement that any violation of rights be “clearly established” — that is, another court must have previously encountered a case with the same context and facts, and found there that the officer was not immune. This is a judge-made rule; the civil rights law itself says nothing about a “clearly established” requirement. Yet in practice it has meant that police officers prevail virtually every time, because it’s very hard to find cases that are the same in all respects. It also creates a Catch-22 for plaintiffs, who are required to hunt down precedents in courts that have stopped generating those precedents, because the plaintiffs always lose. As one conservative judge put it in a U.S. district court in Texas, “Heads defendants win, tails plaintiffs lose.”

In the five decades since the doctrine’s invention, qualified immunity has expanded in practice to excuse all manner of police misconduct, from assault to homicide. As the legal bar for victims to challenge police misconduct has been raised higher and higher by the Supreme Court, the lower courts have followed. A major investigation by Reuters earlier this year found that “since 2005, the courts have shown an increasing tendency to grant immunity in excessive force cases — rulings that the district courts below them must follow. The trend has accelerated in recent years.” What was intended to prevent frivolous lawsuits against agents of the government, the investigation concluded, “has become a highly effective shield in thousands of lawsuits seeking to hold cops accountable when they are accused of using excessive force.”

The vast majority of police officers are decent, honest men and women who do some of society’s most dangerous work. They should be forgiven good-faith mistakes or errors in judgment. But in case after case, well documented now by body cameras and bystanders, too many bad cops go unpunished for policing their fellow citizens in ways that often leave them abused or dead. No official tally of deaths at the hands of police officers is maintained in the United States, a reality that defies common sense in our hypercataloged society, but estimates from journalists and advocacy groups put the number of Americans killed by the police north of 1,000 per year. Black Americans are killed by the police at a much higher rate than white Americans.

When citizens dare to protest police violence, say by kneeling at a sporting event, they are branded “anti-police” and un-American. With a shrinking recourse in the courts and a fierce headwind of social resistance to reforming the way the nation is policed, is it any wonder that many enraged Americans take to the streets — in the midst of a global pandemic, no less — to demand that their country change?

As the militarization of police tactics and technology has accelerated in the past two decades, pleas from liberals and conservatives to narrow the doctrine of qualified immunity, and to make it easier to hold police and other officials accountable for obvious civil rights violations, have grown to a crescendo. The Supreme Court is considering more than a dozen cases to hear next term that could do just that. One case involves a police officer in Georgia who, while pursuing a suspect, held a group of young children at gunpoint, fired two bullets at the family dog, missed and hit a 10-year-old boy in the arm. Another involves officers who used tear gas grenades to enter a home when they’d been given a key to the front door.

There are few things that Justice Sonia Sotomayor and Justice Clarence Thomas agree on, at least when it comes to the letter of the law. Both have expressed deep concern over the court’s drift toward greater and greater qualified immunity for police officers. (“By sanctioning a ‘shoot first, think later’ approach to policing, the Court renders the protections of the Fourth Amendment hollow,” Justice Sotomayor once wrote.) With the next George Floyd just a bad cop away, one hopes the other justices will be moved to ratchet back qualified immunity to circumstances in which it is truly warranted. When bad cops escape justice and trust between the police and the community shatters, it isn’t just civilians who suffer the consequences, it’s the good cops, too".