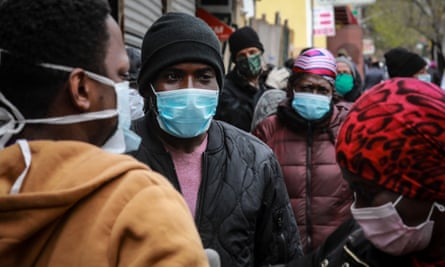 "The racial wound at the center of the coronavirus pandemic in the US continues to fester, with latest data showing that African Americans have died from the disease at almost three times the rate of white people.

New figures compiled by the non-partisan APM Research Lab and released on Wednesday under the title Color of Coronavirus provide further evidence of the staggering divide in the Covid-19 death rate between black Americans and the rest of the nation.

At the level of individual states, the statistics are all the more shocking. Bottom of the league table in terms of racial disparities is Kansas, where black residents are dying at seven times the rate of whites.

“This is a call to action for our county commissioners, our state and our city officials,” the Kansas state representative Gail Finney told local TV channel KWCH12 recently.

In other states, the gulf is almost as extreme. In the nation’s capital, Washington, the disparity in death rate between blacks and whites is six times, in Michigan and Missouri five, and in major hotspots of the disease – New York, Illinois and Louisiana – three.

Despite the glaring gulf, the Trump administration continues to be sluggish in responding to the crisis. Uché Blackstock, an urgent care physician and CEO of Advancing Health Equity, said that the federal reaction had been anemic.

“The disparities are continuing to be reflected in the data, yet we still have a complete lack of guidance from the federal government about how to mitigate these divisions. There is no real plan how to deal with it,” Blackstock said.

Senior Trump administration officials have blamed the disparities on the high incidence among black people of underlying health conditions such as diabetes, hypertension and obesity. On Sunday the health secretary, Alex Azar, pointed to their “greater risk profiles”, and was criticized for blaming the victims of the virus.

While co-morbidities are a factor, there is mounting evidence that black Americans are disadvantaged in terms of access to diagnostic testing and treatment for the disease.

Gathering data on the racial gulf in deaths has itself been hampered by an absence of federal action, compounded by slow and in some cases non-existent reporting by many states. The US Centers for Disease Control and Prevention (CDC) only produced its first set of death statistics by race this week, despite mounting calls for basic information.

In the absence of government data, APM Research Lab has stepped into the breach. It now gathers statistics from 40 states, covering almost 90% of the total of 92,128 deaths in the US recorded by Johns Hopkins.

Andi Egbert, senior researcher at APM Research Lab, said she was astonished that it was left to an independent organization to produce nationwide statistics that should be coming from the federal government. “I won’t speculate about motive, but I can’t believe in a modern economy that we don’t have a mandated, uniform way of reporting the data across states. We are in the midst of this tremendous crisis, and data is the best way of knowing who is suffering and how.”

Among the states that are still failing to produce any data on deaths by racial group are Montana, Nebraska, Utah and North and South Dakota.

The racial disparities in the US death figures became apparent relatively early on in the pandemic, particularly in large cities where black neighborhoods were hit much harder than wealthier white areas. When New York City produced its first racial breakdown of Covid-19 deaths in April it showed that Latino and black New Yorkers, especially in the outer boroughs including Queens and the Bronx, were experiencing death rates that were at least twice those of whites and Asians.

New figures from the city’s health department released this week and reviewed by the New York Times found that when death rates are ranked by zip code, eight out of the top 10 have majority black or Latino populations.

As the pandemic unfolds, some states including Michigan and New York have begun to convene specialist taskforces to grapple with the disproportionate suffering in black communities. But Blackstock said that there remained no sign of the Trump administration stepping up to tackle the crisis.

“At this point we have to assume that the clear lack of guidance from the federal government is going to continue, and that states are going to have to do it for themselves,” she said."