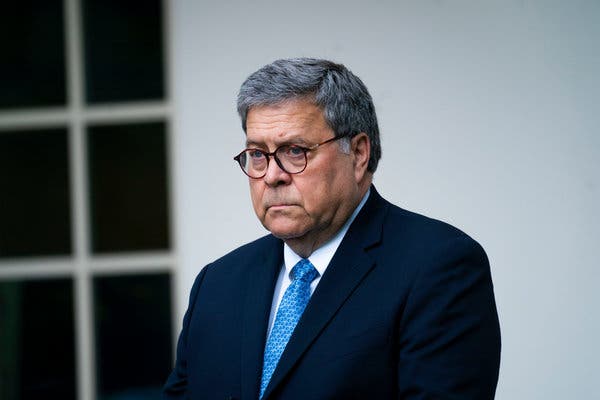 "The F.B.I.’s interview of Mr. Flynn was constitutional, lawful and for a legitimate counterintelligence purpose.

Ms. McCord was an acting assistant attorney general for national security at the Justice Department from 2016 to 2017.

At the direction of Attorney General Bill Barr, the Justice Department last week moved to dismiss a false-statements charge against Michael Flynn, President Trump’s former national security adviser. The reason stated was that the continued prosecution “would not serve the interests of justice.”

The motion was signed by Timothy Shea, a longtime trusted adviser of Mr. Barr and, since January, the acting U.S. attorney in Washington. In attempting to support its argument, the motion cites more than 25 times the F.B.I.’s report of an interview with me in July 2017, two months after I left a decades-long career at the department (under administrations of both parties) that culminated in my role as the acting assistant attorney general for national security.

That report, commonly referred to as a “302,” is an interesting read. It vividly describes disagreements between leadership of the Justice Department and the F.B.I. about how to handle the information we had learned about Mr. Flynn’s calls with the Russian ambassador Sergey Kislyak and, more specifically, Mr. Flynn’s apparent lies about those calls to incoming Vice President Mike Pence.

But the report of my interview is no support for Mr. Barr’s dismissal of the Flynn case. It does not suggest that the F.B.I. had no counterintelligence reason for investigating Mr. Flynn. It does not suggest that the F.B.I.’s interview of Mr. Flynn — which led to the false-statements charge — was unlawful or unjustified. It does not support that Mr. Flynn’s false statements were not material. And it does not support the Justice Department’s assertion that the continued prosecution of the case against Mr. Flynn, who pleaded guilty to knowingly making material false statements to the FBI, “would not serve the interests of justice.”

I can explain why, relying entirely on documents the government has filed in court or released publicly.

Notably, Mr. Barr’s motion to dismiss does not argue that the F.B.I. violated the Constitution or statutory law when agents interviewed Mr. Flynn about his calls with Mr. Kislyak. It doesn’t claim that they violated his Fifth Amendment rights by coercively questioning him when he wasn’t free to leave. Nor does the motion claim that the interview was the fruit of a search or seizure that violated the Fourth Amendment. Any of these might have justified moving to dismiss the case. But by the government’s own account, the interview with Mr. Flynn was voluntary, arranged in advance and took place in Mr. Flynn’s own office.

Without constitutional or statutory violations grounding its motion, the Barr-Shea motion makes a contorted argument that Mr. Flynn’s false statements and omissions to the F.B.I. were not “material” to any matter under investigation. Materiality is an essential element that the government must establish to prove a false-statements offense. If the falsehoods aren’t material, there’s no crime.

Discounting the broader investigation and the possibility of Russian direction or control over Mr. Flynn, the department’s motion myopically homes in on the calls alone, and because it views those calls as “entirely appropriate,” it concludes the investigation should not have been extended and the interview should not have taken place.

The account of my interview in 2017 doesn’t help the department support this conclusion, and it is disingenuous for the department to twist my words to suggest that it does. What the account of my interview describes is a difference of opinion about what to do with the information that Mr. Flynn apparently had lied to the incoming vice president, Mr. Pence, and others in the incoming administration about whether he had discussed the Obama administration’s sanctions against Russia in his calls with Mr. Kislyak. Those apparent lies prompted Mr. Pence and others to convey inaccurate statements about the nature of the conversations in public news conferences and interviews.

Why was that so important? Because the Russians would have known what Mr. Flynn and Mr. Kislyak discussed. They would have known that, despite Mr. Pence’s and others’ denials, Mr. Flynn had in fact asked Russia not to escalate its response to the sanctions. Mr. Pence’s denial of this on national television, and his attribution of the denial to Mr. Flynn, put Mr. Flynn in a potentially compromised situation that the Russians could use against him.

The potential for blackmail of Mr. Flynn by the Russians is what the former Justice Department leadership, including me, thought needed to be conveyed to the incoming White House. After all, Mr. Flynn was set to become the national security adviser, and it was untenable that Russia — which the intelligence community had just assessed had sought to interfere in the U.S. presidential election — might have leverage over him.

This is where the F.B.I. disagreed with the Justice Department’s preferred approach. The F.B.I. wasn’t ready to reveal this information to the incoming administration right away, preferring to keep investigating, not only as part of its counterintelligence investigation but also possibly as a criminal investigation. Although several of us at Justice thought the likelihood of a criminal prosecution under the Logan Act was quite low (the act prohibits unauthorized communications with foreign governments to influence their conduct in relation to disputes with the United States), we certainly agreed that there was a counterintelligence threat.

That’s exactly why we wanted to alert the incoming administration. Ultimately, after our dispute over such notification continued through the inauguration and into the start of the Trump administration, the F.B.I. — without consulting the Justice Department — arranged to interview Mr. Flynn. By the time Justice Department leadership found out, agents were en route to the interview in Mr. Flynn’s office.

The account of my July 2017 interview describes my department’s frustration with the F.B.I.’s conduct, sometimes using colorful adjectives like “flabbergasted” to describe our reactions. We weren’t necessarily opposed to an interview — our focus had been on notification — but any such interview should have been coordinated with the Justice Department. There were protocols for engaging with White House officials and protocols for interviews, and this was, of course, a sensitive situation. We objected to the rogueness of the decision by the F.B.I. director, Jim Comey, made without notice or opportunity to weigh in.

The Barr-Shea motion to dismiss refers to my descriptions of the F.B.I.’s justification for not wanting to notify the new administration about the potential Flynn compromise as “vacillating from the potential compromise of a ‘counterintelligence’ investigation to the protection of a purported ‘criminal’ investigation.” But that “vacillation” has no bearing on whether the F.B.I. was justified in engaging in a voluntary interview with Mr. Flynn. It has no bearing on whether Mr. Flynn’s lies to the F.B.I. were material to its investigation into any links or coordination between Mr. Trump’s presidential campaign and Russia’s efforts to interfere in the 2016 election.

And perhaps more significant, it has no bearing on whether Mr. Flynn’s lies to the F.B.I. were material to the clear counterintelligence threat posed by the susceptible position Mr. Flynn put himself in when he told Mr. Pence and others in the new administration that he had not discussed the sanctions with Mr. Kislyak. The materiality is obvious.

In short, the report of my interview does not anywhere suggest that the F.B.I.’s interview of Mr. Flynn was unconstitutional, unlawful or not “tethered” to any legitimate counterintelligence purpose.

Mary B. McCord, the former acting assistant attorney general for national security at the Department of Justice, is legal director for Georgetown Law’s Institute for Constitutional Advocacy and Protection and a visiting law professor."