Opinion | Of Course There Are Protests. The State Is Failing Black People. - The New York Times 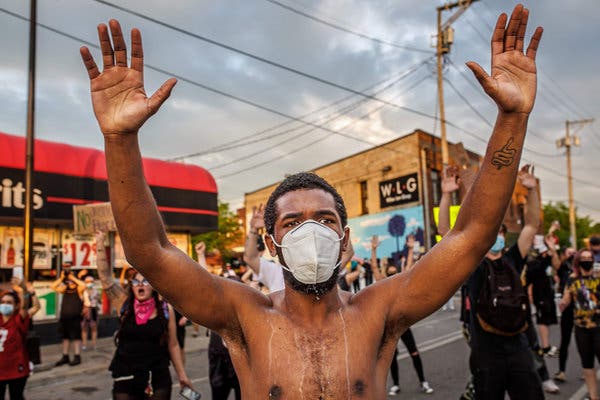 "The collapse of politics and governance leaves no other option.

Ready or not, life is returning to some sort of normal in the United States, and normal inevitably includes police officers killing an unarmed black man in their custody, followed by street protests. The country is working its way back into its familiar groove.

This time it’s Minneapolis. Thousands of people have taken to the streets to protest the killing of George Floyd by a police officer who pressed his knee into Mr. Floyd’s neck for a breathtaking seven minutes as he lay pinned on the ground in handcuffs. Mr. Floyd’s pleas for help — repeating that he couldn’t breathe, calling out for his dead mother — were ignored. The three other police officers who watched seemed uninterested in the life they were violently snuffing out in front of a crowd gathered in disgust.

Elected officials from Minnesota denounced the brutality. Jacob Frey, the mayor of Minneapolis, said, “Being black in America should not be a death sentence.” Others, including Senator Amy Klobuchar, who hopes to emerge as Joe Biden’s running mate, expressed a range of public emotions that have become commonplace: shock, horror, promises of investigation and pleas for calm. In a rare rebuke, the four officers involved have been fired.

But the fact that Mr. Floyd was even arrested, let alone killed, for the inconsequential “crime” of forgery amid a pandemic that has taken the life of one out of every 2,000 African-Americans is a chilling affirmation that black lives still do not matter in the United States.

It is easy to understand the response of multiracial protesters in Minneapolis. (If you look closely, hundreds of white people are participating; the intersecting injustices are also apparent to them.) This spring season has bloomed at least 23,000 Covid-19-related deaths in black America. The coronavirus has scythed its way through back communities, highlighting and accelerating the ingrained social inequities that have made African-Americans most vulnerable to the disease.

This unbelievable loss of life has taken place while restrictions were at their tightest and social distancing at its most extreme. What will happen when the country fully reopens, even as the number coronavirus cases continues to grow? As mostly white public officials try to get things back to normal as fast as possible, the discussions about the pandemic’s devastating consequences to black people melt into the background, consequences which become accepted as a “new normal” we will have to live or die with. If there were ever questions about whether poor and working-class African-Americans were disposable, there can be none now. State violence is not solely the preserve of the police.

It’s not just the higher rates of death that fuel this anger, but also publicized cases where African-Americans have been denied health care because nurses or doctors didn’t believe their complaints about their symptoms. Just as maddening is the assumption that African-Americans have particularly bad health and thus bear personal responsibility for dying in disproportionate numbers.

Instead of using this monumental crisis to change the conditions feeding the rapid rate of black deaths, the armed agents of the state continue their petty, insouciant policing. Even seemingly innocuous instructions for social distancing become new excuses for the police to harass African-Americans. In New York, blacks made up a staggering 93 percent of coronavirus-related arrests. There are similar racial disparities in Chicago. At a time when police departments have pledged to arrest fewer people to stem the spread of the virus in local jails and in the name of preserving public health, African-Americans remain in their cross hairs. After all, why were the police arresting George Floyd for forgery, a “crime” of poverty committed by desperate low-wage workers, in the first place?

When white protesters, armed to the teeth in Michigan and elsewhere, make threats against elected officials, the president praises them as “very good people” and they are largely left alone. They are certainly not suffocated to death on the street. In contrast, after Minnesota’s governor activated the National Guard on Thursday evening, the president suggests that those who protest police brutality could be shot. Protesters in Minneapolis are met with tear gas and projectiles launched by police officers, even as many other public officials claim to sympathize with their anger. These double standards are part of what roils Minneapolis and also why the potential for this kind of eruption exists in every city.

The anger exploding on the streets runs much deeper than the obvious hypocrisies in the disparate treatment of white, conservative protesters and a multiracial crowd of people objecting to police brutality. Over the last several weeks, there has been the taped murder of Ahmaud Arbery in Georgia, the vicious shooting of Breonna Taylor by the Louisville police and the killing of Tony McDade, a black trans man, by police officers in Tallahassee. These cases were ignored until public outcry forced the nation to pay attention, even as the public has been riveted to the news because of stay-at-home orders. Meanwhile, there is the highly publicized case of a white woman in Central Park calling the police on a black man when he asked her to put her dog on a leash. The potential consequences of that call were made clear by the killing of George Floyd.

But what is also unmistakable in the bitter protests in Minneapolis and around the country is the sense that the state is either complicit or incapable of effecting substantive change.

As the Democrats’ presumptive presidential nominee jokes that African-Americans who don’t vote for him are not black, the crisis in black communities seems most acute and overlaps with almost daily incidents of police violence or some other oppressive expression of state power. It was a joke that Joe Biden thought would show his “insider” status with black voters. Instead, it made him look arrogant in assuming he has standing among young or working-class African-Americans. He sounded like any other well-heeled politician who has failed to grasp the enormity of the challenges.

This simultaneous collapse of politics and governance has forced people to take to the streets — to the detriment of their health and the health of others — to demand the most basic necessities of life, including the right to be free of police harassment or murder.

What are the alternatives to protest when the state cannot perform its basic tasks and when lawless police officers rarely get even a slap on the wrist for crimes that would result in years of prison for regular citizens? If you cannot attain justice by engaging the system, then you must seek other means of changing it. That’s not a wish; it’s a premonition.

The convergence of these tragic events — a pandemic disproportionately killing black people, the failure of the state to protect black people and the preying on black people by the police — has confirmed what most of them already know: If we and those who stand with us do not mobilize in our own defense, then no official entity ever will. Young black people must endure the contusions caused by rubber bullets or the acrid burn of tear gas because government has abandoned us. Black Lives Matter only because we will make it so.

This is not new in our history. After World War II, city-dwelling African-Americans saw the contradictions in a society that put a man on the moon, while allowing rats to maul black children in their cribs at night. The federal government underwrote the substandard housing that African-Americans were consigned to because of residential segregation. Everywhere African-Americans looked, the state was not only impervious to their suffering but an accessory to the crime.

This was the source of the black urban uprisings that swept cities around the country in the 1960s, the same era as the civil rights movement in the South. The failure of the state to deliver anything African-Americans were demanding left hundreds of thousands to take things into their own hands. It didn’t matter then, as it doesn’t matter now, whether white society approves or disapproves; what mattered was that formal mechanisms for social change failed to function, compelling African-Americans to act on their own behalf.

Six years ago, the protests in Ferguson, Mo., set the stage for the rise of the Black Lives Matter movement, which is rooted in similar kinds of social incongruities. It was paradoxical that this new movement emerged in the shadow of the country’s first African-American president and the presence of more African-Americans in Congress than at any other point in history. And yet the amassing of that black political power could not stop the quotidian police brutality. Just as it couldn’t stop the collapse of black homeownership, the expansion of the racial wealth gap or the avalanche of student loan debt yoked to the credit reports of black millennials.

It did not matter if the expectations were too grandiose for what a black president could accomplish. What mattered was that when government failed to make a substantive difference in people’s lives, African-Americans protested to make black lives matter."

Opinion | Of Course There Are Protests. The State Is Failing Black People. - The New York Times
Posted by John H Armwood II at 8:21 AM