Opinion | Coronavirus, Racism and Injustice: No One Is Coming to Save Us - The New York Times 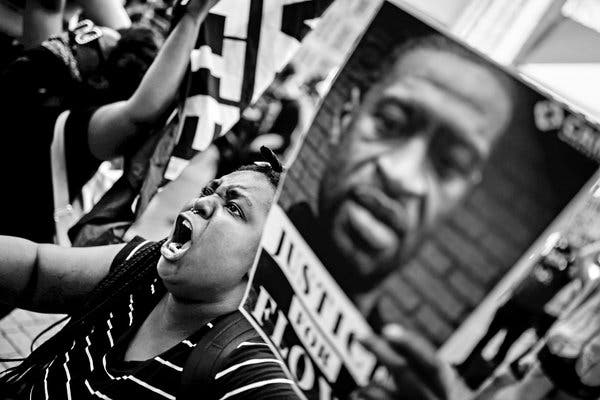 "Eventually doctors will find a coronavirus vaccine, but black people will continue to wait for a cure for racism.

After Donald Trump maligned the developing world in 2018, with the dismissive phrase “shithole countries,” I wrote that no one was coming to save us from the president. Now, in the midst of a pandemic, we see exactly what that means.

The economy is shattered. Unemployment continues to climb, steeply. There is no coherent federal leadership. The president mocks any attempts at modeling precautionary behaviors that might save American lives. More than 100,000 Americans have died from Covid-19.

Many of us have been in some form of self-isolation for more than two months. The less fortunate continue to risk their lives because they cannot afford to shelter from the virus. People who were already living on the margins are dealing with financial stresses that the government’s $1,200 “stimulus” payment cannot begin to relieve. A housing crisis is imminent. Many parts of the country are reopening prematurely. Protesters have stormed state capitals, demanding that businesses reopen. The country is starkly dividing between those who believe in science and those who don’t.

Quickly produced commercials assure us that we are all in this together. Carefully curated images, scored by treacly music, say nothing of substance. Companies spend a fortune on airtime to assure consumers that they care, while they refuse to pay their employees a living wage.

Commercials celebrate essential workers and medical professionals. Commercials show how corporations have adapted to “the way we live now,” with curbside pickup and drive-through service and contact-free delivery. We can spend our way to normalcy, and capitalism will hold us close, these ads would have us believe.

Some people are trying to provide the salvation the government will not. There are community-led initiatives for everything from grocery deliveries for the elderly and immunocompromised to sewing face masks for essential workers. There are online pleas for fund-raising. Buy from your independent bookstore. Get takeout or delivery from your favorite restaurant. Keep your favorite bookstore open. Buy gift cards. Pay the people who work for you, even if they can’t come to work. Do as much as you can, and then do more.

These are all lovely ideas and they demonstrate good intentions, but we can only do so much. The disparities that normally fracture our culture are becoming even more pronounced as we decide, collectively, what we choose to save — what deserves to be saved.

And even during a pandemic, racism is as pernicious as ever. Covid-19 is disproportionately affecting the black community, but we can hardly take the time to sit with that horror as we are reminded, every single day, that there is no context in which black lives matter.

Breonna Taylor was killed in her Louisville, Ky., home by police officers looking for a man who did not even live in her building. She was 26 years old. When demonstrations erupted, seven people were shot by police.

Ahmaud Arbery was jogging in South Georgia when he was chased down by two armed white men who suspected him of robbery and claimed they were trying perform a citizen’s arrest. One shot and killed Mr. Arbery while a third person videotaped the encounter. No charges were filed until the video was leaked and public outrage demanded action. Mr. Arbery was 25 years old.

In Minneapolis, George Floyd was held to the ground by a police officer kneeling on his neck during an arrest. He begged for the officer to stop torturing him. Like Eric Garner, he said he couldn’t breathe. Three other police officers watched and did not intervene. Mr. Floyd was 46 years old.

These black lives mattered. These black people were loved. Their losses to their friends, family, and communities, are incalculable.

Demonstrators in Minneapolis took to the street for several days, to protest the killing of Mr. Floyd. Mr. Trump — who in 2017 told police officers to be rough on people during arrests, imploring them to “please, don’t be too nice” — wrote in a tweet, “When the looting starts, the shooting starts.” The official White House Twitter feed reposted the president’s comments. There is no rock bottom.

Christian Cooper, an avid birder, was in Central Park’s Ramble when he asked a white woman, Amy Cooper, to comply with the law and leash her dog. He began filming, which only enraged Ms. Cooper further. She pulled out her phone and said she was going to call the police to tell them an African-American man was threatening her.

She called the police. She knew what she was doing. She weaponized her whiteness and fragility like so many white women before her. She began to sound more and more hysterical, even though she had to have known she was potentially sentencing a black man to death for expecting her to follow rules she did not think applied to her. It is a stroke of luck that Mr. Cooper did not become another unbearable statistic.

An unfortunate percentage of my cultural criticism over the past 11 or 12 years has focused on the senseless loss of black life. Mike Brown. Trayvon Martin. Sandra Bland. Philando Castile. Tamir Rice. Jordan Davis. Atatiana Jefferson. The Charleston Nine.

These names are the worst kind of refrain, an inescapable burden. These names are hashtags, elegies, battle cries. Still nothing changes. Racism is litigated over and over again when another video depicting another atrocity comes to light. Black people share the truth of their lives, and white people treat those truths as intellectual exercises.

They put energy into being outraged about the name “Karen,” as shorthand for entitled white women rather than doing the difficult, self-reflective work of examining their own prejudices. They speculate about what murdered black people might have done that we don’t know about to beget their fates, as if alleged crimes are punishable by death without a trial by jury. They demand perfection as the price for black existence while harboring no such standards for anyone else.

Some white people act as if there are two sides to racism, as if racists are people we need to reason with. They fret over the destruction of property and want everyone to just get along. They struggle to understand why black people are rioting but offer no alternatives about what a people should do about a lifetime of rage, disempowerment and injustice.

When I warned in 2018 that no one was coming to save us, I wrote that I was tired of comfortable lies. I’m even more exhausted now. Like many black people, I am furious and fed up, but that doesn’t matter at all.

I write similar things about different black lives lost over and over and over. I tell myself I am done with this subject. Then something so horrific happens that I know I must say something, even though I know that the people who truly need to be moved are immovable. They don’t care about black lives. They don’t care about anyone’s lives. They won’t even wear masks to mitigate a virus for which there is no cure.

Eventually, doctors will find a coronavirus vaccine, but black people will continue to wait, despite the futility of hope, for a cure for racism. We will live with the knowledge that a hashtag is not a vaccine for white supremacy. We live with the knowledge that, still, no one is coming to save us. The rest of the world yearns to get back to normal. For black people, normal is the very thing from which we yearn to be free.".

Opinion | Coronavirus, Racism and Injustice: No One Is Coming to Save Us - The New York Times
Posted by John H Armwood II at 10:35 AM