Trump Lashes Out Again at Puerto Rico, Bewildering the Island - The New York Times. This is pure, unadulterated anti-Hispanic racism. Why are Americans accepting this? What does it say about America? 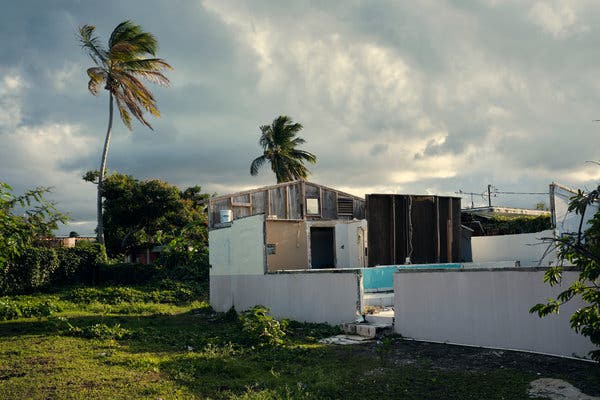 "WASHINGTON — President Trump on Tuesday lashed out at Puerto Rico’s local lawmakers as “grossly incompetent” and singled out one of his favorite targets, Carmen Yulín Cruz, the mayor of San Juan, as “crazed and incompetent.”

Mr. Trump’s latest invective toward the local leaders of an island devastated by a hurricane in September 2017 came in a torrent of tweets, which began on Monday night and spilled into Tuesday morning. Mr. Trump was reacting after the Senate on Monday blocked billions of dollars in disaster aid for Midwestern states, in part because Democrats said a proposed $600 million in nutritional assistance to Puerto Rico fell short of its needs.

“Puerto Rico got far more money than Texas & Florida combined, yet their government can’t do anything right, the place is a mess — nothing works,” Mr. Trump wrote on Twitter. He also stated, incorrectly, that Puerto Rico had received $91 billion in aid from the federal government.

In fact, FEMA and other agencies have so far distributed $11.2 billion in aid to Puerto Rico, according to the Office of Management and Budget. Some $41 billion in aid has been allocated, while $91 billion is the budget office’s estimate of how much the island could receive over the next two decades.

Gov. Ricardo A. Rosselló of Puerto Rico, a Democrat, responded to Mr. Trump in a tweet of his own on Tuesday. “Mr. President, once again, we are not your adversaries, we are your citizens,” Mr. Rosselló wrote.

Mr. Trump has long been sensitive when it comes to the subject of Puerto Rico, where the American government’s response to Hurricane Maria was widely criticized as too slow. Aides and allies said Mr. Trump had vented privately that Puerto Ricans had complained too much, and he had also noted privately that Hurricane Maria, which killed 2,975 people as a result of the storm and its effects, was not as bad as Hurricane Katrina, in which fewer people — 1,833 — were killed.

Mr. Trump has long hit back at Ms. Cruz, who during the disaster became the most outspoken critic of the federal response.

On Tuesday, Mr. Trump seemed to imply in his tweets that Puerto Rico was not part of the United States, noting that local elected officials “only take from USA.” Hogan Gidley, a White House spokesman, seemed to underscore the view in the White House that Puerto Ricans were not Americans when he twice referred to the island as “that country” during an appearance on MSNBC.

Mr. Trump’s apparent disdain for the island’s leadership has led to a breakdown of communication between local officials and the White House.

For weeks, Mr. Rosselló has asked the White House for a private meeting with Mr. Trump to lay out the island’s case for why it desperately needs federal funds for rebuilding after Hurricane Maria. But Mr. Rosselló’s request has gone unanswered, and he has tried instead to communicate with the president publicly, saying in cable news interviews, in official appearances and on Twitter that he fears Mr. Trump has been misled about Puerto Rico’s needs.

Mr. Rosselló’s fight may be an uphill battle with a president who has made it clear that he views more federal aid to Puerto Rico as throwing money away. Mr. Trump’s advisers also view the pleas from local officials as part of a campaign to shift the blame for what they view as severe mismanagement of the supplies and money sent after the storm.

People familiar with Mr. Trump’s thinking said he was skeptical that additional aid would not be used to pay down Puerto Rico’s debt. The acting White House chief of staff, Mick Mulvaney, who has made it clear that he believes Puerto Rico will need to find its own way out of the debt crisis, is believed to be encouraging the president’s negative view of the island.

In Puerto Rico, however, Mr. Trump’s stance is being viewed through the lens of race. In an interview on Tuesday, Mr. Rosselló mentioned, unprompted, that Puerto Rico’s population was almost entirely Latino and said that historically, there have been “ethnic undertones” to the treatment of Puerto Ricans by Washington. “We don’t want special treatment,” he said. “We just want equal treatment.”

The governor also has bigger issues to deal with at home: The resignations of two power players in his cabinet became public late on Monday. Julia Keleher, the education secretary, and Héctor M. Pesquera, the public safety secretary, had been among the least popular members of Mr. Rosselló’s government. Their departures dominated the headlines in the local news media, which made little reference to what is widely seen here as yet another episode of presidential bluster.

That is not to say Puerto Ricans necessarily disagree with Mr. Trump’s criticism of the commonwealth’s leaders, even if many locals dislike the president himself, or the disdainful way he sometimes refers to the island.

“We have a political caste that is opportunistic and extremely corrupt,” said Eduardo Lalo, a well-known local novelist, humanities professor and opinion columnist who supports Puerto Rican independence. “What the president says, of course it’s clumsy and tremendously vulgar, and he says it for reasons of his own that are not substantive. But it’s also objective.”

“We are not your adversaries, we are your citizens,” Gov. Ricardo A. Rosselló of Puerto Rico said in a tweet to President Trump.

Photo by: Thais Llorca/EPA, via Shutterstock

The truth is, he said, “Puerto Rico is a colony of the United States, and therefore its hands are completely tied.”

At a bakery in the comfortable San Juan neighborhood of Ocean Park on Tuesday, the morning crowd was hardly abuzz about Mr. Trump’s comments, though people had noticed them.

One patron, Miguel Rodríguez, 54, pulled out his cellphone to show how, moments earlier, a friend had posted on Facebook that she agreed with the president for the first time in praising Puerto Ricans but labeling their leaders “corrupt.”

Mr. Rodríguez, the owner of a company that installs security systems, scrolled down to the comment he left under his friend’s post: “We do not lack resources, we have too many thieves.”

“The government wants to keep demanding money from the government of the United States,” Mr. Rodríguez said. “But much of that help doesn’t reach the people.”

Politically, Mr. Rosselló is in an unenviable position experienced by all of his predecessors: Puerto Rico cannot get funding even for its food stamp program without approval from Congress, but it has no congressional representation to make its case in Washington. (Representative Jenniffer González-Colón, a Republican, has no vote in the House.) None of the previous governors, however, had to deal with the dire consequences of a devastating hurricane in the middle of a government bankruptcy.

“Neither Trump nor any president of the United States nor any official in the United States has assumed the responsibility it has with Puerto Rico,” Professor Lalo said. “The great tragedy of the Puerto Rican people is that for 120 years, it calls Washington and no one picks up the phone.”

Mr. Rosselló, who is up for re-election next year, has faced intense criticism on the island for trying to work cooperatively with Mr. Trump even as the president was repeatedly deriding Puerto Rican leaders.

Last week, the governor amped up his language against Mr. Trump, appearing to refer to him as a “bully” in an interview with CNN.

“If the bully gets close, I’ll punch the bully in the mouth,” he said. “It would be a mistake to confuse courtesy with courage.”

He later characterized his comments as a metaphor.

Mr. Trump has refrained from going after Mr. Rosselló by name, preferring to focus his attention Ms. Cruz, his political nemesis since her outspoken comments criticizing the Trump administration’s failure to provide swift and meaningful help in the weeks after Hurricane Maria.

After Mr. Trump called Ms. Cruz “crazed and incompetent” on Twitter on Monday, she fired back, calling him “unhinged.”

Ms. Cruz recently declared her candidacy for governor. She and several other candidates are hoping to unseat Mr. Rosselló in 2020. He is a supporter of Puerto Rican statehood; she is not.

“When he doesn’t get his way, he tries to pit people against each other,” Ms. Cruz said of Mr. Trump in an interview on Tuesday. “Three thousand people died under his watch and he has never acknowledged it. He’s now trying to weaponize help — and, in his desperation, he’s lying about it.”

“If he thinks that the money that has come to Puerto Rico is money that we shouldn’t have received, then he doesn’t trust FEMA,” she said. “He shows his inability to lead and that he is incapable of understanding how his own government works.”

Trump Lashes Out Again at Puerto Rico, Bewildering the Island - The New York Times
Posted by John H Armwood II at 6:15 AM