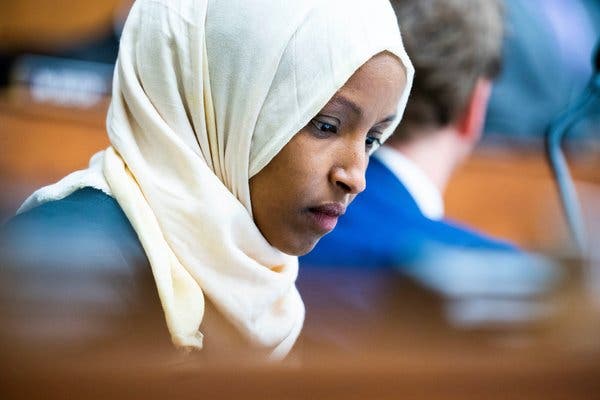 Representative Ilhan Omar is the latest target in a trend of conservatives attacking women of color.

Last month at an event hosted by the Council on American-Islamic Relations, Representative Ilhan Omar, a Minnesota Democrat and one of the first Muslim women elected to Congress, delivered a speech in which she correctly derided Islamophobia, a real and persistent problem in this country and others.

In that speech, Representative Omar invoked the attacks of Sept. 11, saying the council was created “because they recognized that some people did something and that all of us were starting to lose access to our civil liberties.”

(As The New York Times pointed out, “The Council on American-Islamic Relations was actually founded in 1994.)

The congresswoman could have used different, more severe language to describe the attacks, but she didn’t. Maybe we could judge her use of language as inartful, but we all succumb to that occasionally, me included. Error is inevitable among the loquacious. But, the Omar of the speech stands. I saw nowhere in it a thread of terror apologia.

And yet, conservative media has pounced on four of Omar’s words — “some people did something” — as just that. Brian Kilmeade, one of the dull and delusional on “Fox & Friends,” questioned her patriotism, saying, “You have to wonder if she’s an American first.”

Donald Trump upped the ante, retweeting a video of Omar saying, “Some people did something,” interspersed with the still-chilling video of the 9/11 attacks. Some things should be too sacred to exploit for political gain, but Trump is an amoralist. Nothing is beyond the pale.

While the unrelenting attacks on Omar are newsworthy unto themselves as a conservative peculiarity, I believe that the attacks should be viewed through a wider and longer lens. Omar is only the most recent minority woman onto whom conservatives have trained their fire.

While white supremacy has historically tried to paint minority men as physically dangerous, it has routinely painted minority women, particularly those strong and vocal, as pathological and reprobate.

There is a pattern here. It is expressed not only in the attacks on, and in elevation of, Omar, but also on Representative Alexandria Ocasio-Cortez of New York.

And before they tried to make Omar and Ocasio-Cortez the face of the Democratic Party, they did the same to Wilson and Waters. In October 2017, Trump tweeted about Wilson:

“Wacky Congresswoman Wilson is the gift that keeps on giving for the Republican Party, a disaster for Dems. You watch her in action & vote R!”

In June, Trump said, “The face of the Democrats is now Maxine Waters.”

The strategy is simple: While sexism and racism are potent individually, they are devastating in combination, particularly when appealing to a party dominated by white men and which exalts white supremacy and white patriarchy.

The only women they truly honor are white women who obsequiously condone or actively participate in the oppression.

All manner of inhumanity and barbarism have been conducted under the guise of protecting the honor and purity of these white women. There are untold rope-burned necks and fully burned bodies in American history to attest to this.

There is a reason that Trump launching his campaign by calling Mexicans murderers and rapists had such resonance among the people who came to support him.

One of the most memorable scenes in “The Birth of a Nation” was a white woman throwing herself off a cliff to keep from being raped by a black man.

There is a reason that many white people viewed slavery as the guard against the vulnerability of women, and black freedom as the gateway to white woman victimization.

As the Binghamton University historian Diane Miller Sommerville put it in her book, “Rape & Race in the Nineteenth-Century South”: “Black-on-white rape figured prominently in these historical treatments of Reconstruction. Portraying Freedmen as intoxicated with new political power, historians like Claude Bowers described how ‘an awful fear rested upon the [white] women of the communities.’ ”

Sommerville would quote Bowers saying, “Rape is the foul daughter of Reconstruction.”

To advance their oppression, these white men treated white women as victims, and many white women reciprocated by playing the role of victim. In that way, barbarity could be passed off as chivalry.

But for the women who fall outside this constraint — minority women, lesbian and transgender women, liberal women, “nasty” women — the rebuke is brutal. They didn’t need protection, but rather, suppression.

These women herald calamity — both the dislodging of white supremacy and the subversion of male supremacy. Conservatives attack these women because the threat they pose is existential.

We can fuss over the language any of these women have used, and whether some remarks crossed lines of propriety, but to have them as the only arena of discussion about why conservatives are so offended is to be intentionally blind.

These people hate women like Omar because they see them as omens."