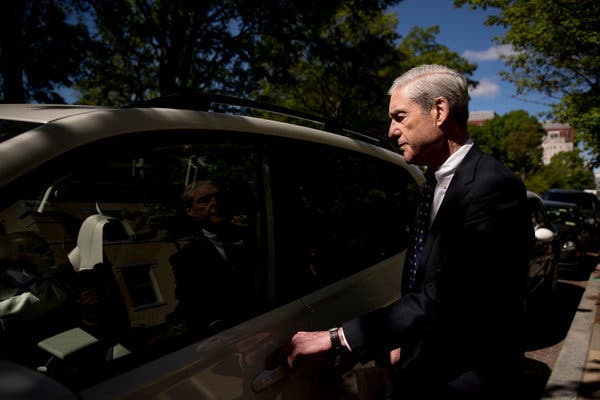 "Robert S. Mueller III, the special counsel, leaving Easter services in April. He ended his investigation and delivered his 448-page report to the attorney general in March.Andrew Harnik/Associated Press

WASHINGTON — Robert S. Mueller III, the special counsel, wrote a letter in late March to Attorney General William P. Barr objecting to his early description of the Russia investigation’s conclusions that appeared to clear President Trump on possible obstruction of justice, according to the Justice Department.

The letter adds to the growing evidence of a rift between them and is another sign of the anger among the special counsel’s investigators about Mr. Barr’s characterization of their findings, which allowed Mr. Trump to wrongly claim he had been vindicated.

It was unclear what specific objections Mr. Mueller raised in his letter. Mr. Barr defended his descriptions of the investigation’s conclusions in conversations with Mr. Mueller over the days after he sent the letter, according to two people with knowledge of their discussions.

Mr. Barr, who was scheduled to testify on Wednesday before the Senate Judiciary Committee about the investigation, has said publicly that he disagrees with some of the legal reasoning in the Mueller report. Senior Democratic lawmakers have invited Mr. Mueller to testify in the coming weeks but have been unable to secure a date for his testimony.

“The special counsel emphasized that nothing in the attorney general’s March 24 letter was inaccurate or misleading,” a Justice Department spokeswoman, Kerri Kupec, said in response to a request for comment made on Tuesday afternoon. “But he expressed frustration over the lack of context and the resulting media coverage regarding the special counsel’s obstruction analysis.”

A spokesman for the special counsel’s office declined to comment.

A central issue in the simmering dispute is how the public’s understanding of the Mueller report has been shaped since the special counsel ended his investigation and delivered his 448-page report on March 22 to the attorney general, his boss and longtime friend. The four-page letter that Mr. Barr sent to Congress two days later gave little detail about the special counsel’s findings and created the impression that Mr. Mueller’s team found no wrongdoing, allowing Mr. Trump to declare he had been exonerated.

But when Mr. Mueller’s report was released on April 18, it painted a far more damning picture of Mr. Trump and showed that Mr. Mueller believed that significant evidence existed that Mr. Trump obstructed justice.

Over the past month, other signs of friction between the attorney general and the special counsel have emerged over issues like legal theories about constitutional protections afforded to presidents to do their job and how Mr. Mueller’s team conducted the investigation.

The findings from the special counsel, Robert S. Mueller III, are now available to the public. The redacted report details his two-year investigation into Russian interference in the 2016 presidential election.

In congressional testimony in April before the report was released, Mr. Barr demurred when asked whether he believed that the investigation was a “witch hunt” — Mr. Trump’s preferred term. It “depends on where you’re sitting,” Mr. Barr replied.

“If you are somebody who’s being falsely accused of something, you would tend to view the investigation as a witch hunt,” he said, an apparent reference to the president.

His testimony stood in contrast to comments he made during his confirmation hearing in January. “I don’t believe Mr. Mueller would be involved in a witch hunt,” he said then.

A rift between the men appeared to develop in the intervening months as the special counsel wrapped up his inquiry.

Mr. Barr and senior Justice Department officials were frustrated with how Mr. Mueller ended his investigation and crafted his report, according to the two people with knowledge of the discussions and another person briefed on the matter.

They expressed irritation that Mr. Mueller fell short of his assignment by declining to make a decision about whether Mr. Trump broke the law. That left Mr. Barr to clear Mr. Trump without the special counsel’s backing.

The senior department officials also found Mr. Mueller’s rationale for stopping short of deciding whether Mr. Trump committed a crime to be confusing and contradictory, and they concluded that Mr. Mueller’s report showed that there was no case against Mr. Trump.

But Mr. Mueller did lay out evidence against the president. After explaining that he had declined to make a prosecutorial judgment, citing as a factor a Justice Department view that sitting presidents cannot be indicted, the special counsel detailed more than a dozen attempts by the president to impede the inquiry. He also left open the door for charges after Mr. Trump leaves office.

“If we had confidence after a thorough investigation of the facts that the president clearly did not commit obstruction of justice, we would so state,” Mr. Mueller and his investigators wrote. “Based on the facts and the applicable legal standards, however, we are unable to reach that judgment.”

Mr. Mueller’s report, the attorney general and the other senior law enforcement officials believed, read like it had been written for consumption by Congress and the public, not like a confidential report to Mr. Barr, as required under the regulations governing the special counsel.

Attorney General William P. Barr testifying before lawmakers in April. “If you are somebody who’s being falsely accused of something, you would tend to view the investigation as a witch hunt,” he said.Erin Schaff/The New York Times

Attorney General William P. Barr testifying before lawmakers in April. “If you are somebody who’s being falsely accused of something, you would tend to view the investigation as a witch hunt,” he said.Erin Schaff/The New York Times

Some of the special counsel’s investigators have told associates that they were angry about Mr. Barr’s initial characterization of their findings, government officials and others have said, and that their conclusions were more troubling for President Trump than Mr. Barr indicated in his four-page letter. That proved to be the case.

In once instance, Mr. Barr took Mr. Mueller’s words out of context to suggest that the president had no motive to obstruct justice. In another instance, he plucked a fragment from a sentence in the Mueller report that made a conclusion seem less damaging for the president.

Investigators wrote, “Although the investigation established that the Russian government perceived it would benefit from a Trump presidency and worked to secure that outcome, and that the campaign expected it would benefit electorally from information stolen and released through Russian efforts, the investigation did not establish that members of the Trump campaign conspired or coordinated with the Russian government in its election interference activities.”

Mr. Barr’s letter only quoted the passage that the investigation had found no conspiracy or coordination.

Despite the disagreement about the report, members of Mr. Mueller’s team worked alongside senior Justice Department officials to redact sensitive information from the report before it was released.

Hours before the public release of the Mueller report, Mr. Barr said during a news conference that he had “disagreed with some of the special counsel’s legal theories” about what constitutes presidential obstruction of justice. He also said repeatedly that the special counsel had found “no collusion” between the Russian government and the Trump campaign. President Trump often uses the term, but Mr. Mueller’s investigators pointed out it had no legal standard and left it out of their judgments.

Instead, investigators wrote that they had not found evidence to prove a criminal conspiracy between the Trump campaign and Russians.

Mr. Barr also said during the news conference that some of Mr. Trump’s efforts to thwart the investigation needed to be put in “context.”

“There is substantial evidence to show that the president was frustrated and angered by a sincere belief that the investigation was undermining his presidency, propelled by his political opponents, and fueled by illegal leaks,” he said."