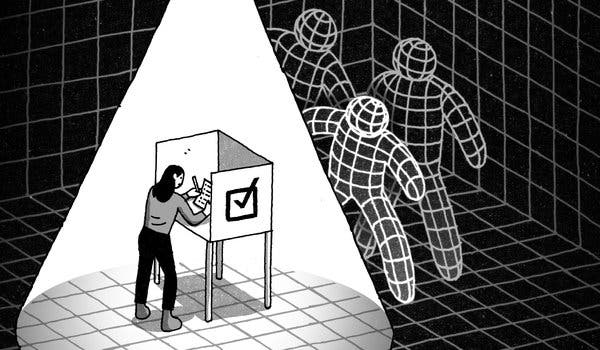 "A perceived victory for Russian interference poses a serious risk for the United States.

The report of the special counsel Robert Mueller leaves considerable space for partisan warfare over the role of President Trump and his political campaign in Russia’s interference in the 2016 election. But one conclusion is categorical: “The Russian government interfered in the 2016 presidential election in sweeping and systematic fashion.”

That may sound like old news. The Justice Department’s indictment of 13 Russians and three companies in February 2018 laid bare much of the sophisticated Russian campaign to blacken the American democratic process and support the Trump campaign, including the theft of American identities and creation of phony political organizations to fan division on immigration, religion or race. The extensive hacks of Hillary Clinton’s campaign emails and a host of other dirty tricks have likewise been exhaustively chronicled.

But Russia’s interference in the campaign was the core issue that Mr. Mueller was appointed to investigate, and if he stopped short of accusing the Trump campaign of overtly cooperating with the Russians — the report mercifully rejects speaking of “collusion,” a term that has no meaning in American law — he was unequivocal on Russia’s culpability: “First, the Office determined that Russia’s two principal interference operations in the 2016 U.S. presidential election — the social media campaign and the hacking-and-dumping operations — violated U.S. criminal law.”

The first part of the report, which describes these crimes, is worthy of a close read. Despite a thick patchwork of redactions, it details serious and dangerous actions against the United States that Mr. Trump, for all his endless tweeting and grousing about the special counsel’s investigation, has never overtly confronted, acknowledged, condemned or comprehended. Culpable or not, he must be made to understand that a foreign power that interferes in American elections is, in fact, trying to distort American foreign policy and national security.

The earliest interference described in the report was a social media campaign intended to fan social rifts in the United States, carried out by an outfit funded by an oligarch known as “Putin’s chef” for the feasts he catered. Called the Internet Research Agency, the unit actually sent agents to the United States to gather information at one point. What the unit called “information warfare” evolved by 2016 into an operation targeted at favoring Mr. Trump and disparaging Mrs. Clinton. This included posing as American people or grass-roots organizations such as the Tea Party, anti-immigration groups, Black Lives Matter and others to buy political ads or organize political rallies.

At the same time, the report said, the cyberwarfare arm of the Russian army’s intelligence service opened another front, hacking the Clinton campaign and the Democratic National Committee and releasing reams of damaging materials through the front groups DCLeaks and Guccifer 2.0, and later through WikiLeaks. The releases were carefully timed for impact — emails stolen from the Clinton campaign chairman John Podesta, for example, were released less than an hour after the “Access Hollywood” tape damaging to Mr. Trump came out.

All this activity, the report said, was accompanied by the well documented efforts to contact the Trump campaign through business connections, offers of assistance to the campaign, invitations for Mr. Trump to meet Mr. Putin and plans for improved American-Russian relations. Both sides saw potential gains, the report said — Russia in a Trump presidency, the campaign from the stolen information. The Times documented 140 contacts between Mr. Trump and his associates and Russian nationals and WikiLeaks or their intermediaries. But the Mueller investigation “did not establish that members of the Trump campaign conspired or coordinated with the Russian government in its election interference activities.”

That is the part Mr. Trump sees as vindication, though the activities of his chaotic campaign team that the report describes are — at best — naïve. It is obviously difficult for this president to acknowledge that he was aided in his election by Russia, and there is no way to gauge with any certainty how much impact the Russian activities actually had on voters.

Since the publication of the report, Vladimir Putin and his government have been crowing that they, too, are now somehow vindicated, joining the White House in creating the illusion that the investigation was all about “collusion” rather than a condemnation of criminal Russian actions. If their hope in a Trump presidency was to restore relations between the United States and Russia, and to ease sanctions, the Russians certainly failed, especially given the added sanctions ordered by Congress over Moscow’s interference.

But if the main intent was to intensify the rifts in American society, Russia backed a winner in Mr. Trump.

A perceived victory for Russian interference poses a serious danger to the United States. Already, several American agencies are working, in partnership with the tech industry, to prevent election interference going forward. But the Kremlin is not the only hostile government mucking around in America’s cyberspace — China and North Korea are two others honing their cyber-arsenals, and they, too, could be tempted to manipulate partisan strife for their ends.

That is something neither Republicans nor Democrats should allow. The two parties may not agree on Mr. Trump’s culpability, but they have already found a measure of common ground with the sanctions they have imposed on Russia over its interference in the campaign. Now they could justify the considerable time and expense of the special counsel investigation, and at the same time demonstrate that the fissure in American politics is not terminal, by jointly making clear to Russia and other hostile forces that the democratic process, in the United States and its allies, is strictly off limits to foreign clandestine manipulation, and that anyone who tries will pay a heavy price."