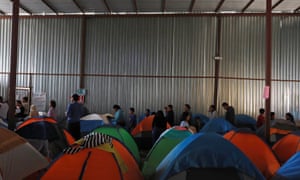 "Seven Central American families living temporarily in Mexico appeared in a San Diego immigration court on Tuesday to plead for asylum in the United States.

Mindful of a federal court ruling the day before that halted the Trump administration’s policy of making asylum seekers wait in Mexico, the judge repeatedly asked the US government lawyer what would happen to these families now.

“I do not have an answer,” replied the lawyer, Kathryn Stuever.

Neither the US government nor the more than 1,000 people awaiting asylum hearings in Tijuana and other cities on the US-Mexico border knows what will happen next to families already returned to Mexico by the Trump administration.

The ruling by a federal judge on Monday made clear that the 11 plaintiffs who sued the government over the policy would be brought back to the US to press their asylum claims. It also made clear that, for now, new asylum seekers could not be forced to await resolution of their cases south of the border.

But the hundreds of people now living in shelters, from tents inside warehouses to more established settings, are in legal limbo – a situation some say frightens them because they feel vulnerable to kidnappings, violence and serious illness.

The migrants are from El Salvador, Honduras, Guatemala and Nicaragua and 286 of them are children. Most do not have legal representation, according to immigration advocates.

In interviews in recent days, several told Reuters of robberies, violence or attempts to kidnap their children.

The news agency was not able to independently verify their claims. But those interviewed said they did not feel safe in Tijuana and were scared to leave the shelters temporarily housing them.

The court ruling does not go into effect until Friday and the White House said it would appeal, which could put the decision on hold. The administration has contended that the asylum seekers are pushing the immigration system to its limits. The appeals process could take months, perhaps extending through the 2020 presidential campaign, legal experts said.

In court Tuesday, Veronica Guadalupe Galdamez, 32, appeared with her two children and her partner. They asked for more time to get a lawyer. In court, her partner claimed fear of being returned to Mexico because “someone tried to take one of the children”.

Galdamez said in an interview this week that she fled El Salvador in 2018 after gang threats. Within minutes of returning to Mexico after her first US court hearing on 1 April, she said, two men tried to steal her four-year-old son.

While it was not possible independently to verify her story, the dangers of Tijuana are generally well known. With 138 murders for every 100,000 residents in 2018, Tijuana was the most violent city in the world outside a war zone, according to a recent study by Mexico’s Security, Justice and Peace research group. San Salvador ranked 24th, with a rate of 50, the study showed.

After appearing in court on Tuesday, Galdamez and her family were referred to an interview with an asylum officer. Her family’s fate was uncertain.

Others in the immigration system pipeline remained in Mexico on Tuesday, wondering what the ruling meant for their futures.

Carmen Zepeda, 45, from El Salvador, was returned to Tijuana last month and has her first court hearing on 22 April. She fled San Salvador following a death threat against her son and domestic abuse by her husband, she said.

“Now we’re in danger here as well,” she said. “I’m praying they give me the opportunity to cross.”