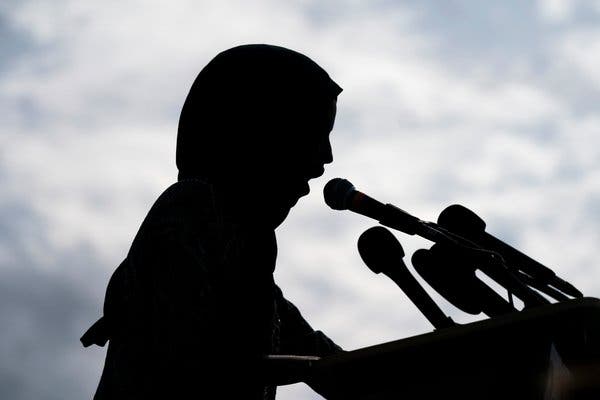 "Representative Ilhan Omar, Democrat of Minnesota and one of the first Muslim women elected to Congress, has emerged as a foil for President Trump before the 2020 election.Jim Lo Scalzo/EPA, via Shutterstock

Representative Ilhan Omar, Democrat of Minnesota and one of the first Muslim women elected to Congress, has emerged as a foil for President Trump before the 2020 election.

As long as President Trump has focused on what he said was the danger lurking at the southwestern border, he has also talked about the supposed threat from one specific group already in the country: Muslims.

During the 2016 campaign, he would not rule out creating a registry of Muslims in the United States. He claimed to have seen “thousands” of Muslims cheering on rooftops in New Jersey after Sept. 11, a statement that was widely debunked. After deadly attacks in Paris and California, Mr. Trump called for a moratorium on Muslims traveling to the United States.

Now, with 19 months until the 2020 election, Mr. Trump is seeking to rally his base by sounding that theme once again. And this time, he has a specific target: Representative Ilhan Omar, Democrat of Minnesota and one of the first Muslim women elected to Congress.

Mr. Trump and his team are trying to make Ms. Omar, one of a group of progressive women Democratic House members who is relatively unknown in national politics, a household name, to be seen as the most prominent voice of the Democratic Party, regardless of her actual position. And they are gambling that there will be limited downside in doing so.

On Monday, Mr. Trump will visit Minnesota — a state that some of the president’s aides speak of as a place to expand his electoral map — and will hold an economic round table. The event is outside Ms. Omar’s congressional district, but the president’s decision to appear there is a calculated choice.

His Minnesota appearance comes after his tweet of a video interspersed with Ms. Omar speaking and the burning World Trade Center towers. Ms. Omar’s critics have claimed a portion of the remarks, in which she highlighted Islamophobia faced by Muslims after Sept. 11, were dismissive of the terrorist attacks.

Mr. Trump is banking on painting the entire Democratic Party as extreme. And Ms. Omar has become a point of contention for some members of her own party, after remarks she made about the Israel lobby were condemned as anti-Semitic by some long-serving Democrats, as well as by Republicans and Mr. Trump.

But Mr. Trump’s electoral success in 2016 was based partly on culture wars and fears among an older, white voting base that the country it knew was slipping away. Like his hard line on immigration, his plays on fears of Muslims — including inaccurately conflating them with terrorists — proved polarizing among the wider electorate, but helped him keep a tight grip on his most enthusiastic voters. In the South Carolina Republican primary in February 2016, for instance, exit polls showed that 75 percent of voters favored his proposed Muslim ban.

Now, as he looks toward 2020, he is betting that electoral play can deliver for him again. It is a strategy that risks summoning dark forces in American society, a point Ms. Omar made in a statement Sunday evening.

“Since the president’s tweet Friday evening, I have experienced an increase in direct threats on my life — many directly referencing or replying to the president’s video,” Ms. Omar said. “This is endangering lives. It has to stop.”

Speaker Nancy Pelosi said on Sunday that she had requested a review of Ms. Omar’s security, while Trump aides insisted that the president meant no harm.

Mr. Trump, who once said, “Islam hates us,” tweeted a video on Friday that interspersed remarks made by Ms. Omar with graphic images of Sept. 11.Tom Brenner for The New York Times

Mr. Trump, who once said, “Islam hates us,” tweeted a video on Friday that interspersed remarks made by Ms. Omar with graphic images of Sept. 11.

“Certainly the president is wishing no ill will and certainly not violence towards anyone,” Sarah Huckabee Sanders, the White House press secretary, said on Sunday’s broadcast of ABC News’ “This Week.”

Privately, Mr. Trump’s advisers describe Ms. Omar as his ideal foil. Her remarks about the power of the pro-Israel lobby in the United States, combined with her role in a progressive contingent of freshman House Democrats who have sparked intraparty battles, have been treated as a gift by Republicans.

Trump aides and allies say they are pleased that some of the Democratic hopefuls for the 2020 presidential nomination are defending her against the president’s attacks, claiming they think it will be damaging for them in the general election.

Ms. Omar “is the perfect embodiment of the sharp contrast President Trump wants to paint for 2020,” said Sam Nunberg, a 2016 campaign aide to Mr. Trump. He added that Mr. Trump is tethering Ms. Omar to more visible Democrats, like her closest ally in Congress, Representative Alexandria Ocasio-Cortez of New York, whom Republicans have sought to make a boogeyman.

“This contrast gives the president a chance to expand his support closer to 50 percent,” Mr. Nunberg insisted.

But on Sunday, Democrats said Mr. Trump was diving into an issue on which he has a shaky standing.

“He has no moral authority to be talking about 9/11 at all,” Representative Jerrold Nadler, Democrat of New York, said on CNN’s “State of the Union” on Sunday. Mr. Nadler noted that Mr. Trump’s real estate company applied for and received grants after the attacks that were intended for small businesses affected by the devastation.

Mr. Nadler said he thought Ms. Omar’s comments about the Sept. 11 attacks were being taken out of context.

“I have had some problems with some of her other remarks, but not with that one,” Mr. Nadler said.

The controversy arose from Ms. Omar’s remarks at an event last month sponsored by the Council on American-Islamic Relations, an advocacy organization, where she focused on attacks against Muslims after Sept. 11. She said she had “lived with the discomfort of being a second-class citizen and, frankly, I’m tired of it, and every single Muslim in this country should be tired of it.”

“CAIR was founded after 9/11 because they recognized that some people did something and that all of us were starting to lose access to our civil liberties,” she said. (The organization was actually founded in 1994.)

Critics of Ms. Omar contended that the words “some people did something” were dismissive of the terrorist attacks, but her defenders said her words were taken out of context.

The attack was not Mr. Trump’s first on Ms. Omar. Despite repeatedly being denounced for not making forceful condemnations of white nationalists who traffic in anti-Semitism, the president pounced when Ms. Omar unleashed a firestorm in February with her comments on Israel, rejecting her subsequent apology and calling for her to resign.

Geoff Garin, a veteran Democratic strategist, said the Democratic presidential candidates who had responded to Mr. Trump’s latest attacks on Ms. Omar were keeping the focus on his tactics. And he predicted that the use of such graphic images from one of the nation’s darkest days would backfire for the president.

“Voters are turned off by the use of 9/11 for political purposes, and my guess is that moderate voters are going to see Trump’s use of that as both ugly and extreme,” Mr. Garin said. “I think his over-the-top exploitation of 9/11 is going to turn more voters off than he wins over by attacking the Democrats on this.”

In Attacking Ilhan Omar, Trump Revives His Familiar Refrain Against Muslims - The New York Times
Posted by John H Armwood II at 11:59 AM