Joe Biden Expresses Regret to Anita Hill, but She Says ‘I’m Sorry’ Is Not Enough 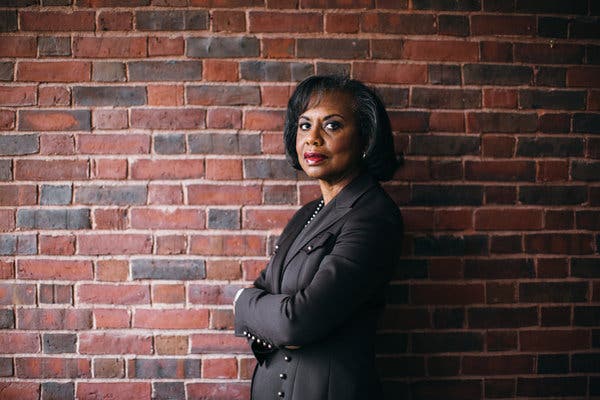 WASHINGTON — Former Vice President Joseph R. Biden Jr. called Anita Hill earlier this month to express his regret over “what she endured” testifying against Justice Clarence Thomas at the 1991 Supreme Court hearings that put a spotlight on sexual harassment of women, according to a spokeswoman for Mr. Biden.
But Ms. Hill, in an interview Wednesday, said she left the conversation feeling deeply unsatisfied and declined to characterize his words to her as an apology. She said she is not convinced that Mr. Biden truly accepts the harm he caused her and other women who suffered sexual harassment and gender violence.
“I cannot be satisfied by simply saying I’m sorry for what happened to you. I will be satisfied when I know there is real change and real accountability and real purpose,” she said.
She said she cannot support Mr. Biden, who as chairman of the Senate Judiciary Committee in 1991 oversaw the confirmation of Supreme Court Justice Clarence Thomas, until he takes responsibility for what he did and is also troubled by the recent accusations of improper touching.
Anita Hill testified before the Senate Judiciary Committee during confirmation hearings for Justice Clarence Thomas in October 1991.Jose R. Lopez/The New York Times
“The focus on apology to me is one thing,” she said. “But he needs to give an apology to the other women and to the American public because we know now how deeply disappointed Americans around the country were about what they saw. And not just women. There are women and men now who have just really lost confidence in our government to respond to the problem of gender violence.”
Mr. Biden’s outreach to Ms. Hill, a law professor, was an attempt to defuse one of his most glaring vulnerabilities as he begins his presidential bid.
“They had a private discussion where he shared with her directly his regret for what she endured and his admiration for everything she has done to change the culture around sexual harassment in this country,” said Kate Bedingfield, the deputy campaign manager for Mr. Biden, who declared his presidential candidacy on Thursday.
Mr. Biden has long cast the hearings in passive terms, as something that happened to Ms. Hill, not something he and others did to her. Ms. Hill has said in the past that Mr. Biden has never directly apologized for his actions.
Last month, at an event in New York honoring students who fight sexual violence, Mr. Biden acknowledged his role in a moment that remains seared in the minds of many women.
“She faced a committee that didn’t fully understand what the hell this was all about,” he said. “To this day, I regret I couldn’t give her the kind of hearing she deserved. I wish I could have done something.”

Joe Biden Expresses Regret to Anita Hill, but She Says ‘I’m Sorry’ Is Not Enough
Posted by John H Armwood II at 4:45 PM