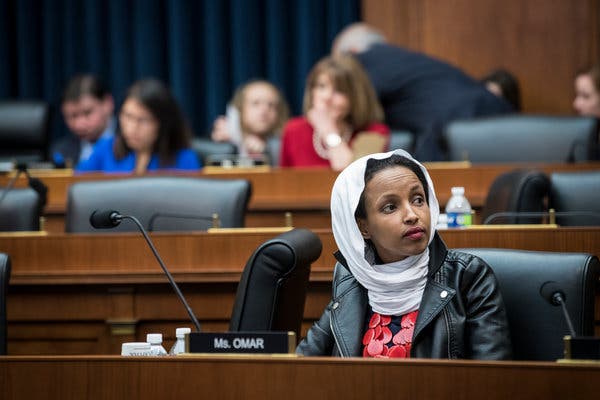 "President Trump on Friday targeted Representative Ilhan Omar for remarks she made during a speech on civil rights and Muslims in America with a graphic video featuring the burning World Trade Center towers and other images from Sept. 11, 2001, that he tweeted to millions of his followers.

The Twitter post from the president stoked and amplified a controversy that has been a focus of conservative news outlets, which have sought to elevate Ms. Omar — a Minnesota Democrat and one of the first Muslim women elected to Congress — as a political target, as Mr. Trump’s re-election campaign begins in earnest.

At issue were remarks that Ms. Omar made last month at an event hosted by the Council on American-Islamic Relations. There, she gave a speech in which she addressed lingering fear directed at Muslims, and the rights Muslims have to speak out about being viewed with suspicion.

During the speech, she said that Muslims had “lived with the discomfort of being a second-class citizen and, frankly, I’m tired of it, and every single Muslim in this country should be tired of it.” She added that the council was created after the Sept. 11 attacks “because they recognized that some people did something and that all of us were starting to lose access to our civil liberties.” (The Council on American-Islamic Relations was actually founded in 1994.)

Conservative news outlets and some Republican officials have focused on the words “some people did something,” arguing that Ms. Omar was playing down the attacks that killed more than 3,000 people and led to two yearslong wars. The video the president tweeted also focused on those four words from Ms. Omar’s speech.

A spokesman for Ms. Omar has said the speech was addressing civil rights.

Ms. Omar has already been the focus of threats, including one by a supporter of Mr. Trump who was recently arrested.

Ms. Omar’s closest ally in the House, Representative Alexandria Ocasio-Cortez, Democrat of New York, used Twitter to defend her colleague and urged others to do the same.

“Members of Congress have a duty to respond to the President’s explicit attack today,” she tweeted. “@IlhanMN’s life is in danger. For our colleagues to be silent is to be complicit in the outright, dangerous targeting of a member of Congress. We must speak out.”

She included in her post the famous words of a Lutheran minister, Martin Niemöller, who had been a Nazi sympathizer, about turning his head on the Nazis’ actions during World War II.

Senator Bernie Sanders, independent of Vermont, who is running for president as a Democrat, quickly joined Ms. Ocasio-Cortez.

“Ilhan Omar is a leader with strength and courage. She won’t back down to Trump’s racism and hate, and neither will we,” he tweeted. “The disgusting and dangerous attacks against her must end.”

In a series of tweets, Mayor Pete Buttigieg of South Bend, Ind., a Democratic presidential candidate and a veteran who served in Afghanistan, also criticized Mr. Trump.

“After 9/11 we all said we were changed. That we were stronger and more united,” he tweeted. “That’s what ‘never forget’ was about. Now, a president uses that dark day to incite his base against a member of Congress, as if for sport. As if we learned nothing that day about the workings of hate.”

“The President is inciting violence against a sitting Congresswoman—and an entire group of Americans based on their religion,” she tweeted. “It’s disgusting. It’s shameful. And any elected leader who refuses to condemn it shares responsibility for it.”

It was unclear late Friday who made the video that the president tweeted. In recent weeks, his Twitter feed has promoted at least two controversial videos that came from elsewhere on the web."