Inside the collapse of a bipartisan Obamacare deal - POLITICO 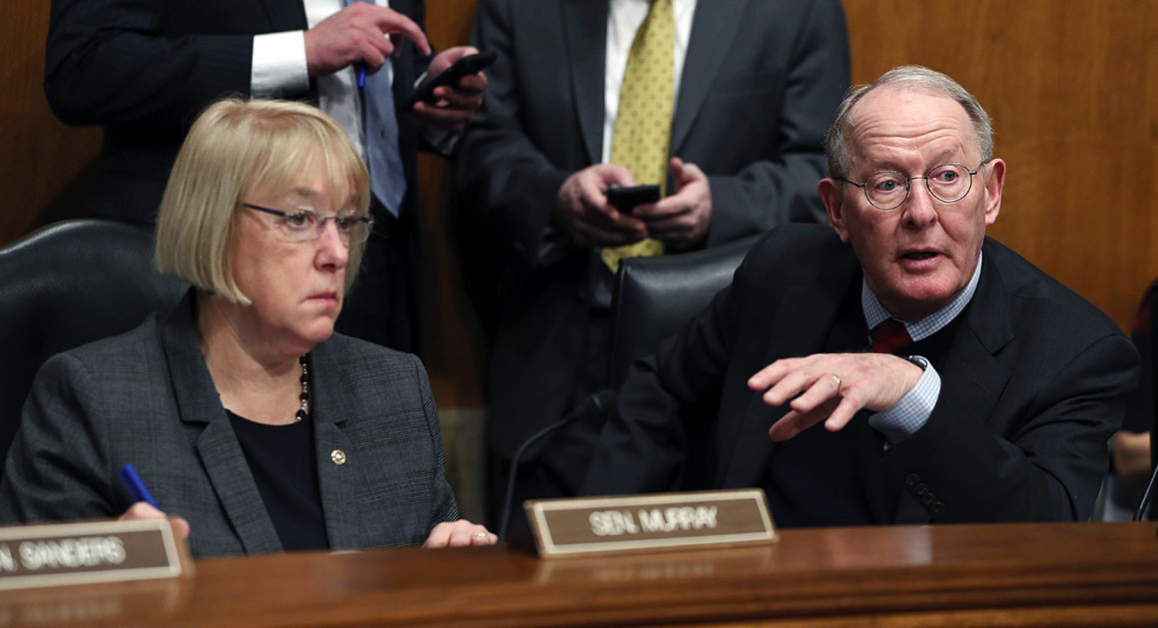 Everybody on Capitol Hill agreed: If anyone could break the deep-rooted partisan logjam over Obamacare in Congress, it was that deal-making duo Patty and Lamar.

But in the end, it was Obamacare that broke their alliance.

Just seven months after Sens. Patty Murray (D-Wash.) and Lamar Alexander (R-Tenn.) heralded the beginning of a new bipartisan era on health care following the collapse of Obamacare repeal efforts, their lofty ambitions ended in much the same way as every Obamacare-related negotiation over the last eight years — with claims of betrayal, warnings of political fallout and no progress toward bridging the deep divide over the nation’s health care system. When Congress put its finishing touches on a $1.3 trillion spending bill late last week, there was one glaring omission: a proposal to head off huge premium spikes just before the November midterm elections.

“I’m no magician,” Alexander said in a fiery floor speech Thursday, after Murray blocked a final effort to include a last-ditch partisan proposal in the spending package. “I greatly respect the senator from Washington and enjoy working with her, but on this issue, I think we’ve reached an impasse.”
The unraveling of the senators’ health care partnership, which culminated in an increasingly bitter dispute over abortion policy, effectively ended Congress’ last best chance of shoring up Obamacare this year, while doubling as a fresh sign of just how far apart the two parties remain on health care.

Many senators thought the long history of bipartisan dealmaking between Alexander and Murray, who lead the Senate HELP Committee, would result in the first-ever bipartisan Obamacare deal eight years after it passed with only Democratic votes. They had previously rewritten the No Child Left Behind education bill and the 21st Century Cures Act speeding drug and medical device approvals — two big accomplishments in a Congress that struggles to agree on much of anything.

In truth, Murray and Alexander came closer than ever before to striking a good-faith deal aimed at stabilizing the health law — only to watch it collapse over peripheral policy disagreements and broader political calculations.

Since September, Alexander had slowly cultivated support among many Republicans for the once-implausible idea of injecting billions of dollars into already-shaky Obamacare markets after the party had backed moves that would surely weaken them, such as the elimination of the requirement to purchase health insurance. For the first time in Obamacare’s history, Republicans feared voters would blame them for premium increases.

But Republican leaders refused to include the senators’ initial Obamacare stabilization agreement in a budget deal late last year over concerns it wouldn’t clear the House, where an influential conservative bloc has staunchly opposed any legislation seen as aiding the health care law. Their second try fell apart last week in dramatic fashion after a flurry of eleventh-hour negotiations and policy clashes between Republicans, Democrats and the White House played out against the backdrop of Congress’ race to fund the government.

At the center of that was a late-emerging dilemma over abortion restrictions. Republicans insisted the deal to prop up the Obamacare marketplaces had to include prohibitions on the federal funding of abortion — dubbed “Hyde” language — which was not written into the Affordable Care Act but is in nearly every other health spending bill. The debate over abortion funding nearly derailed Obamacare before its passage in 2010.
Democrats balked at the new GOP demand, arguing it would significantly expand federal funding restrictions on abortion. Any insurance plan that covered abortion wouldn’t be able to get federal funds from Obamacare, or worse, insurers in some states wouldn’t be allowed to sell any individual market health plan that covers abortion, they warned.

Talks hit a standstill. GOP leaders insisted on the abortion restrictions if any Obamacare stabilization package were going to make it into the omnibus spending bill. And Democrats stood firm, knowing Republicans would need their votes to pass the omnibus and keep the government open.

“There was no need to re-litigate the discussion around taxpayer funding for abortion,” said a Democratic aide familiar with the negotiations. “It just simply wasn’t the venue, like it or not.”

Still, Alexander, Murray and Sen. Susan Collins (R-Maine), a moderate who supports abortion rights, tried to resolve the dispute in the final days of omnibus negotiations. Days before the spending bill passed, Democrats offered language similar to what was in the Affordable Care Act, sources familiar with the negotiations said.

Obamacare already requires insurers to separate federal funds from the money paid by customers for abortion coverage, under a controversial agreement brokered in 2010 by former Rep. Bart Stupak of Michigan, an anti-abortion Democrat.
“Sen. Murray made it clear that she was willing to negotiate to make sure the status quo was maintained,” an aide to Murray said.
But that drew the two sides no closer, with the GOP viewing the offer as “lipstick on Stupak,” according to a Republican source familiar with negotiations. Republicans have long protested that the "Stupak" language didn't do enough to prohibit the federal funding of abortion. Speaker Paul Ryan, Senate Majority Leader Mitch McConnell and Alexander all said Republicans wouldn't vote for anything they deemed less restrictive than Hyde language.
“I think they genuinely did everything they could at the last possible second to sabotage us — to have a political issue,” said a senior Republican aide.

As it became clear that the whole stabilization plan was unlikely to make it into the omnibus, McConnell asked Democrats to include parts of it that wouldn’t wade into abortion policy. McConnell’s proposal included new flexibility for states to overhaul their insurance markets, the ability to sell health insurance across state lines and the creation of cheaper “copper” health plans, according to Democratic and Republican sources. Democrats also rejected those offers.

Facing a stalemate, Alexander and Collins secured White House support for their own stabilization package — an endorsement that hinged in large part on inclusion of the Hyde language. Collins, whose support for the GOP tax bill was contingent on passing an Obamacare stabilization package, dismissed any suggestion the Hyde language would change the status quo.

“This is nothing radical or new, and it is baffling and gravely disappointing that this should be used to block this package,” she said on the Senate floor Thursday.

Alexander and Collins, backed by several other GOP lawmakers, posted their stabilization bill March 19 — pushing their split with Democrats into public view and effectively ending the Senate’s brief detente over Obamacare.

Murray contends she didn’t know in advance that Republicans would forge ahead on their own with this Hyde language. A Republican aide maintains that Murray’s office was sent the text days in ahead of time.
The passage of the omnibus effectively ended Congress’ major legislative work for the year. Alexander’s and Murray’s camps insist the bipartisan duo will survive this bump in the road. They’ve been through contentious battles before, such as the nomination process of Education Secretary Betsy DeVos.

But with lawmakers already eyeing November’s midterms, the breakup guarantees that Obamacare will be at the center of yet another election cycle.

Democrats hoping to seize control of the House have hammered the Trump administration for undermining Obamacare at every turn. GOP lawmakers, meanwhile, maintain that Obamacare is fundamentally flawed and that Democrats weren’t willing to compromise when Republicans tried to find a solution that would sidestep another chaotic year in the individual insurance market.

“I don’t understand it,” Alexander said of the impasse. “And I don’t see any way to make any progress on it.”
Missing out on the latest scoops?

Inside the collapse of a bipartisan Obamacare deal - POLITICO: ""