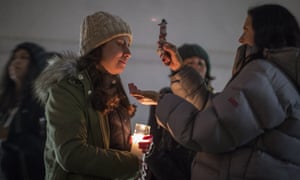 "For those who know the Americas as the Great Turtle Island or Abya Yala, Daca is not an immigration crisis – it is a matter of simple human rights

As we approach the 5 March date for expiration of the legal immigration status of so-called Dreamers – those who came to the US as children and now fall under Deferred Action for Childhood Arrivals status, or Daca – we as citizens of the original Indigenous Nations of this continent have been watching closely.

We have dealt with these issues ever since the first Europeans crossed the Atlantic and “discovered” lands you call the Americas, known to us for millennia as the Great Turtle Island or Abya Yala. Since the United States was founded on our lands in 1776, these policies and practices have had a devastating impact on the territories and rights of the Original Nations and our relatives from both north and the south of US borders.

For us, Daca is not an immigration crisis. It is a human rights crisis. And human rights cannot be deferred. Every day approximately 122 people lose Daca protection. This cruel policy immorally punishes and traumatizes innocent young people and their families.

As Indigenous Peoples, we know our history and we know our relatives. Many so-called “undocumented” people are in fact Indigenous Peoples, children of Original Nations with a millennial history of travel across the continent to trade and engage in ceremonial obligations at sacred sites of their traditional territories before the US existed.

The US-Mexico border is not an indigenous border. Similarly, to citizens of the Onondaga Nation – part of the Six Nation Haudenosaunee Confederacy, what you call the Iroquois – the US-Canadian border runs through traditional lands that we view as one inseparable nation.

Dividing families is something we cannot imagine doing to others, because we have been through this pain many times at the hands of the same government. That is why we as Indigenous Peoples support immediate passage of a “clean” Dream Act, and it should definitely not be linked to funding a wall along the US-Mexico border that Indigenous Nations never consented to in the first place. A wall will exacerbate human rights violations and bring horrendous environmental destruction to the land.

When European colonists arrived and were hungry, we fed them. When they were cold we clothed them and when they needed a place to stay we offered hospitality on our lands. And when they moved toward independence in confederation as a country, we instructed them in our Great Law of Peace.

If we are to truly discuss US immigration, we should start in 1493 with the “Doctrine of Discovery”, a series of papal bulls declaring lands not occupied by Christians could be claimed in the name of the explorers’ European sovereigns. Far from ancient history, the doctrine to this day underlies the law and policy related to Indigenous land rights and human rights in US courts and across the world. The lingering racism underpinned by the doctrine is the real “constitutional crisis” unfolding before us daily, a symptom of the underlying crisis of self-definition of the US body politic that lies at the root of the tree of the American “experiment” in democracy.

While the US constitution says that treaties – such as the 1794 Treaty of Canandaigua with the Haudenosaunee, signed by George Washington for the United States – are the supreme law of the land, the United States failed to enforce the promised recognition and protection of our lands from illegal invasion by settlers. As we have sought justice in the US courts for this illegal theft of our land, the courts refused to hear the case, citing the Doctrine of Discovery and claiming “it would be too disruptive” to the “justified expectations” of non-Native people now living on our lands.

To be clear, the Onondaga Nation explicitly stated we do not want to “deport” people from our lands, the way we have been displaced historically. Yet while the US claimed it feared disrupting our non-native neighbors, they would hypocritically deport young Dreamers who have grown up in the US, with no regard for disrupting their lives and families.

The United Nations Declaration on the Rights of Indigenous Peoples (UNDRIP) proclaims: “Indigenous peoples, in particular those divided by international borders, have the right to maintain and develop contacts, relations and cooperation, including activities for spiritual, cultural, political, economic and social purposes, with their own members as well as other peoples across borders.”

In the spirit of responsibility for caretaking the land for future generations, we call upon leadership from all sectors of society to live up to the ideals of democracy and decency, of human rights and justice and act immediately to protect Dreamers and their families, and to recognize, respect and guarantee basic dignity and inherent human rights of all peoples, including Indigenous Peoples’ equal right of self-determination.

No one is illegal. Human rights cannot be deferred."


Dreamers must be protected – as Indigenous Peoples were not | Opinion | The Guardian
Posted by John H Armwood II at 8:02 AM