‘Every stone will be uncovered’: how Georgia officials failed the Ahmaud Arbery case | US news | The Guardian 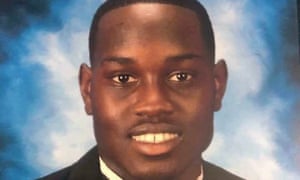 "In the days and weeks after Ahmaud Arbery was shot and killed, multiple Glynn county law enforcement officials failed to thoroughly investigate his death and, in one case, refused to allow police officers to make arrests.
Arbery, 25, was jogging through the neighbourhood just outside of Brunswick, Georgia, on 23 February when he was shot dead by two white men. Gregory McMichael, 64, and his son Travis, 34, were charged with murder and aggravated assault on Thursday evening, after graphic video footage of the killing was released publicly and sparked national outrage.
Lawyers for Arbery’s family have called the killing a “modern lynching” and decried the lack of action in the case prior to the release of the video, pointing to racial inequalities in the criminal justice system. In the police report, Gregory McMichael claimed Arbery had “violently attacked” his son, who had shot Arbery in self defense.
Jackie Johnson, the Glynn county district attorney, refused to allow police officers who had responded to the incident to arrest the two men, Allen Booker, the Glynn county District 5 commissioner, told the Atlanta Journal-Constitution on Friday. Gregory McMichael is a retired district attorney investigator, who recently retired from Johnson’s office.
“The police at the scene went to her, saying they were ready to arrest both of them. These were the police at the scene who had done the investigation,” Booker told the AJC. “She shut them down to protect her friend McMichael.”
Days later, Johnson recused herself. Her office did not respond to the AJC’s request for comment.
By 27 February, George Barnhill, the Waycross judicial district attorney, and the second of three DAs on the case, took over. On 2 April, he wrote an email to the Glynn county police department saying it was his view that there was “insufficient probable cause” to arrest the McMichaels, arguing that they had acted lawfully under Georgia’s self-defense laws, a view that was overturned when the pair was arrested this week.
“Arbery’s mental health records & prior convictions help explain his apparent aggressive nature and his possible thought pattern to attack an armed man,” Barnhill said in the 2 April email, which was first reported by the New York Times.
“This family are not strangers to the local criminal justice system,” Barnhill wrote in another email sent on 7 April to Georgia attorney general Chris Carr’s office referring to the Arbery family.
“What it appears is he was purposely trying to assault the character of the victim and there’s just no reason why,” said Chris Stewart, one of the lawyers representing Arbery’s family.
The family have pointed to McMichael’s connection to local law enforcement both at the district attorney’s office and police department as evidence of systemic flaws and roadblocks in their search for justice. It was only after the video of Arbery’s death was released this week that the third DA’s office requested the Georgia Bureau of Investigations (GBI) get involved.
On Friday, GBI director Vic Reynolds told reporters he could not “answer what another agency did or didn’t see” in the first two months of the investigation. “But I can tell you that based on our involvement in this case and considering the fact we hit the ground running Wednesday morning and within 36 hours we had secured warrants for two individuals for felony murder, I think that speaks volumes for itself.”
In the 7 April email, Barnhill recused himself because his son worked on a case involving Arbery while working in Johnson’s office.
Lee Merritt, one of the lawyers who represents Arbery’s family, said Wanda Cooper-Jones, Arbery’s mother, found the connection between Barnhill’s son and her own on Facebook and brought it to the attention of his office. “She followed the links. That’s exactly how it happened,” he said to the Guardian Friday by phone.
According to a police report filed 23 February, Gregory and Travis McMichael grabbed their weapons, a .357 Magnum revolver and a shotgun, jumped into a truck and followed Arbery as he ran. In the email to Carr from early April, Barnhill references a “decent cell phone video of the entire shooting incident”, an apparent reference to the one leaked this week.
Reynolds said on Friday that the investigation into the shooting, the video and the person who filmed it, would continue.
“Every stone will be uncovered,” Reynolds said."
‘Every stone will be uncovered’: how Georgia officials failed the Ahmaud Arbery case | US news | The Guardian
Posted by John H Armwood II at 8:26 AM