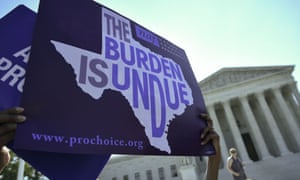 Evangelicals institutions are, as a rule, the most un-Christlike organizations in America and naturally are Trump's core base of support and in American were born out of their support for slavery and then segregation. They continue peddling pure evil.
"There’s nothing pro-life about exploiting a pandemic to further a political agenda
Arwa MahdawiSat 4 Apr 2020 09.00 EDT
It’s already apparent a small minority of zealots will do everything they can to use the coronavirus crisis to eradicate the right to an abortion
Texas says abortion not essential, church services are
Coronavirus is an unprecedented public health crisis. But, for some Republicans, it’s also a political opportunity: anti-abortion activists are ruthlessly using the pandemic as an excuse to crack down on reproductive rights. Six conservative states – Indiana, Iowa, Mississippi, Ohio, Oklahoma and Texas – have categorized abortions as non-essential, except in very limited cases, effectively banning access to the procedure during the pandemic.
Federal judges have stopped the bans from going into effect in most of these states. However, on Tuesday an appeals court ruled that Texas could reinstate its abortion ban. On the same day women were told that their reproductive rights were considered dispensable, Texas’s Governor Greg Abbott declared that religious services were “essential” and in-person gatherings could continue during the pandemic. This is despite the fact that there have been multiple cases of coronavirus spreading in places of worship, with people dying as a result.
Getting an abortion in Texas wasn’t exactly easy before Covid-19; the state has 21 clinics for 6 million women of reproductive age. But now desperate women are going to be forced to put themselves in danger by traveling long distances to get care in neighboring states. According to the Guttmacher Institute the Texas ban has increased one-way distances to an abortion clinic from 12 miles to 243 miles; that’s an increase of almost 2,000%. As is the case with all restrictions on abortion, the burden will fall disproportionately on low-income women without the resources to travel.
It is also likely that the Texas abortion ban will result in more women attempting dangerous DIY procedures. According to a recent study women in Texas are already three times more likely to try to end their pregnancy on their own than women in other states.
There is nothing pro-life about exploiting an emergency to further a political agenda. There’s nothing pro-life about forcing women to give birth during a pandemic. There’s nothing pro-life women having to put themselves in danger to get the help they need, and the services the constitution is supposed to protect. But, as has always been clear, anti-abortion fanatics don’t care about “life”, they care about control.
The Texas abortion ban is supposed to be temporary. But our civil liberties are most fragile during times of fear and crisis; rights that are lost are not easily won back. It’s not just our physical health that we need to worry about during this pandemic; it’s the health of our democracy. As is already apparent, a small minority of zealots will do everything they can to use this crisis to eradicate the right to an abortion in America. "

There’s nothing pro-life about exploiting a pandemic to further a political agenda | Arwa Mahdawi | Opinion | The Guardian
Posted by John H Armwood II at 11:06 AM