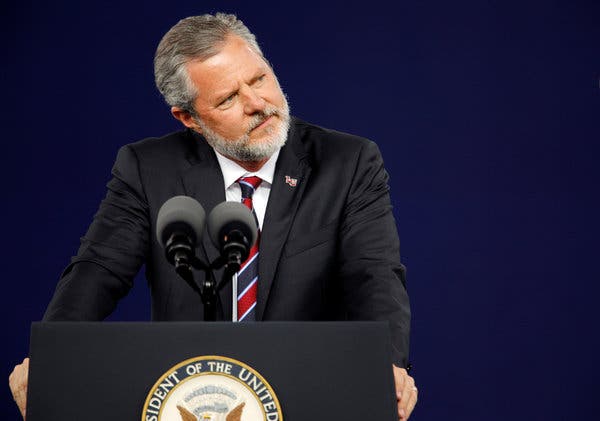 "Jerry Falwell Jr. has tried to have journalists arrested as he maintains he has been unfairly maligned. But the coronavirus keeps spreading around Liberty University.

WASHINGTON — Jerry Falwell Jr.’s angry counteroffensive against critics of his decision to invite Liberty University students back to its Lynchburg, Va., campus after spring break has played out in the media, the courts, even with the campus police.

But his campaign has been undermined by the spread of a virus he cannot control.

Since March 29, when the first case was diagnosed in a Liberty student living off-campus, confirmed coronavirus cases in the Central Virginia health district, which surrounds Lynchburg and Liberty, have grown from seven to 78. One person has died. On Tuesday, a Lynchburg city police officer tested positive, forcing another officer into quarantine and setting off a furious effort to trace all of the infected officer’s contacts.

It is not known whether any of those cases are linked to returning Liberty students, but the university community is exposed as well. Liberty said on Wednesday night that two employees had tested positive for the coronavirus, two more had results pending, and seven were quarantined at home. Beyond the one acknowledged infection in a student, who the university said was not enrolled in classes, test results are due Friday on another student. Two other students have been relocated and quarantined in an annex with “no symptoms, no test.”

A worship leader at Thomas Road Baptist Church, which is adjacent to and affiliated with Liberty’s campus, is also sick with Covid-19, the disease caused by the novel coronavirus.

“It’s been quite a two weeks,” the leader, Charles Billingsley, said in an emotional message on Facebook.

Amid those struggles, a Liberty student on Monday filed a class-action lawsuit in a federal court in Virginia, saying that Liberty and Mr. Falwell had “placed students at severe physical risk and refused to refund thousands of dollars in fees owed to them for the Spring 2020 semester,” according to a statement from the law firm filing the suit.

The furor in Lynchburg centers on Mr. Falwell’s decision to open the campus to all students and staff at a time when most American universities were closing for fear of spreading the disease. For weeks before that decision, Mr. Falwell had derided other universities’ coronavirus responses as overreactions driven by a desire to harm President Trump.

“We think it’s irresponsible for so many universities to just say ‘closed, you can’t come back,’ push the problem off on other communities and sit there in their ivory towers,” he told a conservative radio host.

Since the media spotlight trained on Liberty’s decisions, Mr. Falwell, a close ally of Mr. Trump, has protested that his policies were no different than many other university administrators, and that he has been singled out for unfair criticism by liberal journalists bent on his destruction.

“The facts are that Liberty University’s response to the unfolding Covid-19 pandemic is indistinguishable from that of many, if not most, universities, and, more importantly, it had not experienced a single on-campus student or employee testing positive for Covid-19,” he said this week in a statement that ignored illnesses among off-campus members of the Liberty community.

To his supporters, he has been less temperate. The media, he said in a radio interview with John Fredericks, who identified himself as a Trump campaign operative, “just want power, they’re authoritarian, they’re like nothing I’ve seen since, if you go back in history, to Nazi Germany. That’s what they remind me of.”

And he has spared no effort to defend his actions since articles on Liberty’s reopening ran in ProPublica and The New York Times. He pursued arrest warrants for misdemeanor trespassing against two journalists, Alec MacGillis, a reporter for ProPublica, and Julia Rendleman, a freelance photographer for The Times. He enlisted a New York law firm to threaten legal action against The Times and, he has said, other outlets as well.

He called a Times reporter shortly before midnight, leaving a voice mail message that said, “you’re in some serious trouble.” He accused the journalists of putting his students at risk because they traveled from New York City. (They did not.)

But all of those actions have had consequences.

Liberty’s legal threat against the photographer elicited a response from the newspaper’s counsel, David McCraw.

“Julia was engaged in the most routine form of news gathering: taking pictures for a news story,” Mr. McCraw said in a statement. “We are disappointed that Liberty University would decide to make that into a criminal case and go after a freelance journalist because its officials were unhappy with press coverage of the university’s decision to reopen campus in the midst of the pandemic.”

Virginia Tech and U.C.L.A., singled out in Liberty’s ad, said Liberty’s portrayal of their on-campus population after spring break was inaccurate and inflated.

Liberty incorrectly said the number of students still living on Virginia Tech’s campus after spring break was 950, when the true number was 483, said Tracy Vosburgh, vice president for university relations at Virginia Tech. Before the ads ran, “we notified Liberty on Thursday, April 9 that the number was incorrect,” she said, and asked that Liberty correct it at the time. Liberty did not.

U.C.L.A. spokesman Steve Ritea made a similar point: Liberty University “inaccurately projected that 20 percent of our student population remained on campus after spring break,” he said. “In fact, that percentage is in the low single digits.”

Officials at Arizona State and Texas A&M said the numbers in the Liberty ad were correct.

About 1,900 Liberty students initially returned to campus; the university has said it does not know how many more returned to off-campus housing in Lynchburg. Liberty said on Wednesday that 1,060 students remain on campus, providing no count of off-campus students.

The university continued in-person teaching for a couple of classes until Virginia Gov. Ralph Northam ordered that all higher education institutions in the state cease such instruction. That order came after The New York Times article disclosed that one Liberty student had tested positive for Covid-19.

Mr. Falwell has announced that residential students who did not return to campus would receive a $1,000 credit toward fees for the next school year, but lawyers leading the lawsuit against him say that is a fraction of the lost residential fees, which were between $9,200 and $16,000 for the 2019-2020 academic year.

Adam Levitt, a partner at the DiCello, Levitt, Gutzler law firm that represents the student who filed the class action lawsuit, said that since filing the suit on Monday, “a substantial number of students and family members have reached out to us.” He put the numbers in double digits but declined to be more specific.

“Like other universities,” Mr. Falwell acknowledged in his statement Wednesday, Liberty has been sued “as a result of state-mandated restrictions.” He added, “we think the law is clear that these claims are without merit.”

City officials say that Mr. Falwell assured them during spring break that only about 300 students, who either live abroad or had nowhere else to go would return after spring break. Then he changed his mind, reopening the campus to a potential population of thousands.

Mr. Falwell has not contacted Lynchburg Mayor Treney Tweedy or the city manager, Bonnie Svrcek, since bringing the students back to campus, a move the mayor called “reckless” at the time.

In an interview on a conservative radio show on Tuesday, Mr. Falwell blamed national media coverage for the backlash. “I really attribute all what the mayor said and what the city manager said to fear that was put into them by lies from the national press,” Mr. Falwell said.

“I am not and never have been motivated by fear of anyone,” she said in an email Tuesday night. “My and the mayor’s request of President Falwell to close the university following spring break was based on President Trump’s and Governor Northam’s emergency declaration.”