Republicans Pursue Limits on Voting by Mail, Despite the Coronavirus - The New York Times 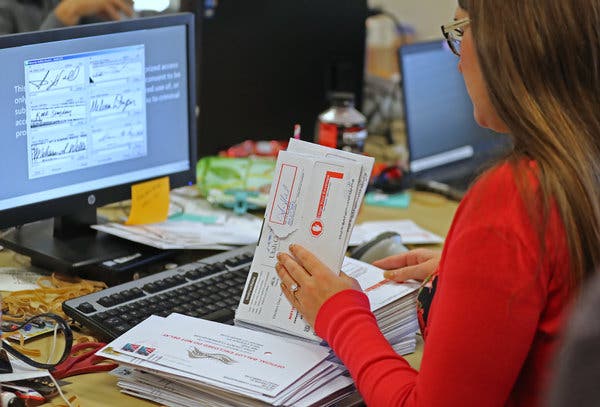 "President Trump and his Republican allies are launching an aggressive strategy to fight what many of the administration’s own health officials view as one of the most effective ways to make voting safer amid the deadly spread of Covid-19: the expanded use of mail-in ballots.
The scene Tuesday of Wisconsinites in masks and gloves gathering in long lines to vote, after Republicans sued to defeat extended, mail-in ballot deadlines, did not deter the president and top officials in his party. Republican leaders said they were pushing ahead to fight state-level statutes that could expand absentee balloting in Michigan, Minnesota, Arizona and elsewhere. In New Mexico, Republicans are battling an effort to go to a mail-in-only primary, and they vowed on Wednesday to fight a new move to expand postal balloting in Minnesota.
The new political effort is clearly aimed at helping the president’s re-election prospects, as well as bolstering Republicans running further down the ballot. While his advisers tend to see the issue in more nuanced terms, Mr. Trump obviously views the issue in a stark, partisan way: He has complained that under Democratic plans for national expansion of early voting and voting by mail, “you’d never have a Republican elected in this country again.”

Republicans Pursue Limits on Voting by Mail, Despite the Coronavirus - The New York Times
Posted by John H Armwood II at 9:48 AM