Vote safely by mail in November? Not so fast, say Republicans | US news | The Guardian 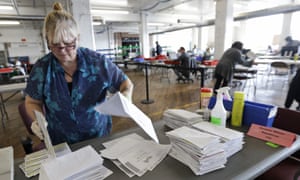 "An explosive fight is emerging over whether Americans will be able to vote in November without risking their lives.

It’s unclear how safe it will be to gather at the polls during the presidential election, but President Donald Trump and other top Republicans have made it clear that they will oppose efforts to make it easier to vote by mail as an alternative.

Both Republicans and Democrats have long utilized mail-in voting, and voters on both ends of the political spectrum overwhelmingly favor making it easier to do so in the election. But Trump’s opposition appears based on a thinly-veiled political calculus: the fewer Americans who vote, the better the political prospects for the Republican party.

“They had things, levels of voting, that if you’d ever agreed to it, you’d never have a Republican elected in this country again,” the president said in March, dismissing Democratic efforts to expand mail-in voting.

That Republican estimation has been at the center of many of the hotly-contested fights over voting rules in recent years. The party has generally favored restrictions on voting, such as voter ID, while Democrats have pushed to make it easier to cast a ballot.

When it comes to vote by mail, however, the calculation is unsupported by evidence. Making it difficult to vote by mail could actually wind up hurting the Republican party.

“It’s become an explosive issue because President Trump and some others at the top of Republican party, including [RNC chair] Ronna McDaniel, have made it an issue,” said Rick Hasen, a law professor at the University of California, Irvine. “That puts Republicans in somewhat of a bind, because in many places in the country, vote by mail is a successful and safe way that Republicans get the vote out among their supporters.”

A Stanford study examining the switch to vote by mail in California, Washington, and Utah found that it did not benefit Democrats or Republicans, and only modestly increased turnout. Colorado elected a Republican US senator the year after it switched to all vote-by-mail elections. In Florida’s March primary, Republicans were more likely to vote by mail.

“We would work really hard on absentee ballots. It was a staple of our strategy,” said Mac Stepanovich, a retired Florida Republican political operative, said of past campaigns. “Republicans probably ought not to be complaining about it.”

Even as Republican operatives are seeking to scale up their vote-by-mail operations, congressional Republicans have staunchly opposed efforts in coronavirus stimulus bills that would make it easier to vote. They dismissed plans to require states to automatically mail everyone a ballot, expand early voting, and implement online voter registration. So far, the parties have agreed on allocating $400m to states to help them prepare for elections, a fraction of the minimum $4bn experts say is needed.

“It’s really disappointing that our political leaders aren’t all working to ensure that every eligible American is able to cast a ballot that will count,” said Myrna Pérez, director of the voting rights and elections program at the Brennan Center for Justice. “There used to be a point in time where having free and fair access to the ballot was a bipartisan issue.”

Currently, five US states conduct their elections entirely by mail, while access to mail-in balloting varies widely in others. To run an election that relies heavily on vote by mail would require investing millions of dollars in ballots, staffing, new technology and messaging, according to the Brennan Center.

In Orange county, California, switching to vote-by-mail took three or four years of planning and cost at least $3m, said Neal Kelley, the county’s registrar of voters. In Washington state, it took five years to transition to an all vote-by-mail system. Most US election offices – some with just one or two full-time employees – do not have the resources to make this transition in time for November without support.

“The clock is ticking,” said Amber McReynolds, the chief executive of the National Vote at Home Institute and Coalition, which advocates for vote by mail.

In recent weeks, Democrats and voting groups have filed a slew of lawsuits – taking aim at restrictive state laws that require voters to give an excuse to vote by mail or have an in-person witness for their ballots. Advocates also want states to pick up the cost of postage on mail-in ballots and registration forms, calling it an unconstitutional poll tax.

But Republicans in Texas, Wisconsin, New Mexico, and Nevada have opposed these lawsuits. The office of Texas attorney general Ken Paxton, even went so far as to say that anyone who advised a voter they could cast a mail-in ballot because of Covid-19 could be subject to “criminal sanctions”.

The Republican National Committee and Trump’s re-election campaign meanwhile, had already planned to spend $10 million to fight Democratic voting lawsuits. An RNC spokesman told NPR the committee would probably spend even more because of Covid-19.

If this political stalemate persists, the US might end up with a large-scale version of the chaotic Wisconsin primary, which took place earlier in April.

With coronavirus cases rising, Wisconsin severely limited early voting and an unprecedented 1.2 million people requested absentee ballots. Election offices were overwhelmed with absentee ballot requests, and some voters never received ballots at all. Turnout didn’t drop as severely as many projected, but voters in Milwaukee were forced to wait hours in line to vote. At least 52 people have since tested positive for Covid-19.

Without action, there could be similar consequences in November. There might be a delay in issuing ballots, and voters might get their ballots too late to vote, said Michael McDonald, a University of Florida political science professor. A nefarious actor could intentionally slow down the election process by making multiple ballot requests, forcing the election official to investigate (one clerk in Wisconsin reported a voter requested a ballot 11 times).

More voting by mail will also slow down reporting of election results, since election officials would have to count ballots coming in after election night. This could leave room for a candidate to question the legitimacy of the results.

“I’m concerned not only that a delay in reporting results will leave room for people to claim fraud, but also potentially for a candidate who’s ahead in an early count to claim victory while the votes may shift as additional votes are counted,” Hasen said.

Breaking from Trump, some Republican officials have embraced vote-by-mail, though modestly. Ohio’s governor and secretary of state encouraged everyone to request an absentee ballot for the state’s primary. Georgia’s top election official, a Republican, is mailing absentee request forms to all active registered voters. Republican officials in New Hampshire and Kentucky have eased restrictions on mail-in voting.

Meanwhile, officials in some Democratic-leaning jurisdictions are not waiting for state support, and plan to send absentee ballot request forms to all registered voters. Such a move could force Republican counterparts to follow suit.

“The intransigence of the Republicans to think that anything that might increase turnout might help the Democrats is very short sighted,” McDonald said. “I think Republicans are making a huge strategic error here if they don’t want to provide resources.”

Vote safely by mail in November? Not so fast, say Republicans | US news | The Guardian
Posted by John H Armwood II at 8:44 AM