Opinion | Trump Hates Having Too Many Voters - The New York Times 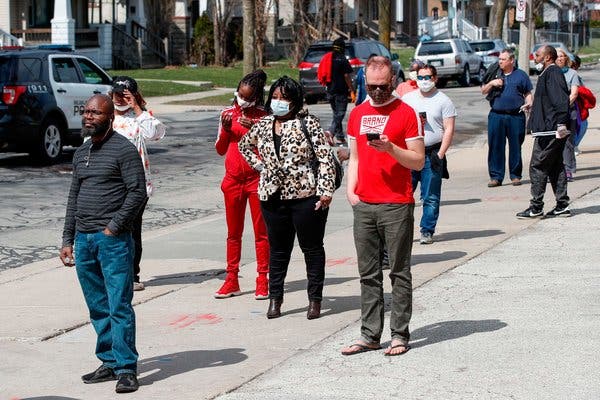 Voters in Milwaukee waiting to cast their ballots in the primary elections on Tuesday.

So. It’s all settled. Joe Biden versus Donald Trump. We’ve got the candidates for the 2020 presidential race, people. Now all we have to do is make sure we have an election.

Aren’t you a little worried about this? The huge mess in Wisconsin this week showed what can happen if you mix a pandemic, an already-confusing voting system and partisan politics.

Everybody’s seen those pictures of people in Milwaukee, wearing face masks, standing in lines to the polls that stretched on for blocks and blocks and blocks. It looked like one of those stories about determined citizens in a young democracy. (“It took Mongolian nomad Pagvajaviin Shatarbaatar seven days to get to his polling station to vote in Wednesday’s general election. …”)

Those of you who are desperately seeking a sense of continuity in these tumultuous times will be relieved to hear Trump said the human logjam was all about him.

“In Wisconsin what happened is I through social media put out a very strong endorsement of a Republican conservative judge who’s an excellent brilliant judge,” he said, “… and I hear what happened is his poll numbers went through the roof.” In terror, Trump concluded, the Democrats “delayed the election.”

Except for the part where he had actually endorsed said judge in January. “And there were no polls,” added Barry Burden, the director of the University of Wisconsin Elections Research Center.

Details, details. Every day Trump comes out for a press conference and tells us … new things. This week he once again claimed he’d compared coronavirus to the flu only because he was trying to be “a cheerleader for this country.” But this time he added, with a perfect lack of irony: “The flu is nothing to sneeze at.”

On Wednesday, after Bernie Sanders dropped out of the race, he had nice things to say about the democratic socialist. (“Bernie and I agree on trade.”) And dark hints about Biden. “It does amaze me that President Obama hasn’t supported Sleepy Joe,” Trump mused. Maybe, he told reporters, Obama “knows something that you don’t know. That I think I know but you don’t know.”

This is just Day 1. By the time we get to the summer, Trump’s Biden is going to stop being sleepy and turn into — oh, something way more actively evil.

Meanwhile, that’s it, Democrats. No more primary predictions. People who are desperately trying to come up with a new non-virus conversation topic while dining with the person they’ve been alone with for a month are just going to have to talk about vice-presidential nominees. Or that TV show about the guy with tigers.

Or — what’s going to happen when everybody tries to vote. Even a post-coronavirus election could be very messy. But experts who dangle hope that we’ll be out of this ungodly situation by the summer also tend to add that it might return when things get cold around, um, November.

How do we avoid becoming a national Wisconsin? The answer, most people who seriously study the issue agree, is voting by mail. “Republican and Democratic state officials are asking for this,” said Michael Waldman, president of the Brennan Center for Justice. “The further you get from the Fox News green room, the less partisan it is.”

A) Fine — just voted absentee myself in the Florida primary.

B) Neutral — plan to ask my election law expert more about it once I find out who he is.

C) Against! I only win if nobody votes.

Well, I know you know that it’s a variation on C. Although Trump did admit he voted by mail in Florida’s primary. (“There’s a big difference between somebody that’s out of state and does a ballot, and everything’s sealed, certified and everything else.”)

It seems when he’s not battling the pandemic, he is waging war on voting reform. “They have to be very careful because you know the things with bundling and all of the things that are happening with votes by mail where thousands of votes are gathered and I’m not going to say which party does it, but thousands of votes are gathered and they come in and they’re dumped in a location and then all of a sudden you lose elections that you think you’re going to win. I won’t stand for it,” Trump said. As only Trump can.

But he was a lot clearer when confiding to his Twitter muse: Mail voting “doesn’t work out well for Republicans.”

Wow, that guy does blurt out almost anything, even when he’s writing. Actually, mail-in ballots work fine for Republicans in many states — Utah has nothing but. This sounds more like the moan of a man who came up about three million short in the popular vote. Who knows what might happen if more people joined in?

To mail or not to mail is pretty much up to the states. But whatever their system, most need much better equipment, like computers and printers. The Brennan Center estimates getting the entire nation up to speed would cost about $2 billion.

If Congress wants to avoid a whole crop of Wisconsins this fall, it needs to put a lot of money in the next stimulus. But call it voting infrastructure. Trump loves infrastructure. The bill could fix our voting system in the nick of time. Just nobody tell him what’s in it."

Opinion | Trump Hates Having Too Many Voters - The New York Times
Posted by John H Armwood II at 9:43 AM