Opinion | In the American South, a Perfect Storm Is Gathering - The New York Times 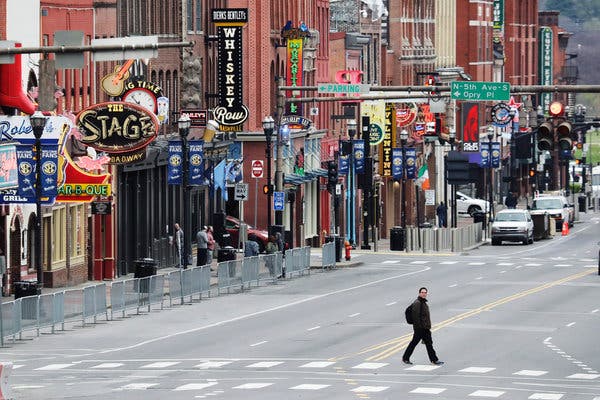 "In states with many uninsured citizens, few hospitals and leaders who have not required citizens to stay home, a disaster is looming.

NASHVILLE — On March 22, when Nashville’s mayor John Cooper closed nonessential businesses here, it was a terrible blow to companies and shops still reeling from the tornado that tore through Middle Tennessee on Super Tuesday. Small businesses struggle in the best of times, and a one-two punch like that — a natural disaster followed by a lethal pandemic — will almost certainly force some of them to close for good.

But it had to be done. Nashville’s courts and schools were already closed, but the crowds on Lower Broadway, the heart of Nashville’s tourist district, showed no sign of dissipating. “Downtown Nashville is undefeated,” tweeted a visitor posting a video of music fans crowded onto a dance floor. Even after the Nashville Board of Health voted unanimously to shut the honky-tonks down, several bar owners said they would not comply unless ordered to do so by the governor of Tennessee.

Such orders have been slow in coming here, and in nearly every other state in the American South. Tennessee governor Bill Lee was slow to end the legislative session and send members of the Tennessee General Assembly home to their districts, slow to close public schools, slow to suspend church services, slow to shutter restaurants and gyms.

Many city charters in Tennessee prevent local leaders from issuing their own orders, and mayors begging for a statewide directive got none. Chaz Molder, mayor of Columbia, Tenn., urgently called on Mr. Lee to issue a statewide stay-at-home order: “One state, one response,” he wrote on Twitter. But in a conference call on March 16, Mr. Lee told local leaders around the state that mandates weren’t necessary to enforce social-distancing guidelines: “We’re not issuing orders, we’re issuing guidance and strong suggestions,” Mr. Lee said. “We don’t have to mandate people not do certain behavior because Tennesseans follow suggestions.”

As it turns out, they don’t. Last week I arrived to pick up a to-go order I’d paid for on the phone and that the owner had promised to put directly into the trunk of my car. But where I expected to find a deserted parking lot, it was business as usual on a sunny spring Saturday. Nashville has received hundreds of reports of similar violations.

Joelle Herr, owner of The Bookshop in East Nashville, which closed more than two weeks ago, wrote on Facebook about her “fury, despair and helplessness” at watching other businesses carry on as if nothing had changed. “It’s frustrating when you feel like you’re one of only a few doing the right thing (and at a great cost to my small business!) and those doing the wrong thing are the ones with the greater impact — an impact that is going to be devastating.”

On March 30, when Mr. Lee issued an executive order shutting down nonessential businesses, he stopped short of requiring Tennesseans to stay home. “It is deeply important that we protect personal liberties,” he said, ignoring tens of thousands of health professionals who argued that nothing less than a stay-at-home order would save this state from disaster. And not just this state.

Out of fear of what Tennessee’s delays might mean for their own populations, Fort Campbell, a U.S. Army base that straddles the Tennessee-Kentucky border, restricted travel to Nashville. And Andy Beshear, the Democratic governor of Kentucky, urged his citizens not to enter Tennessee: “We have taken very aggressive steps to try to stop or limit the spread of the coronavirus to try to protect our people,” Mr. Beshear said. “But our neighbors from the south, in many instances, are not. If you ultimately go down over that border and go to a restaurant or something that’s not open in Kentucky, what you do is you bring the coronavirus back here.”

Kentucky, which not only elected a Democratic governor but also expanded Medicaid under the Affordable Care Act, is an outlier in the South. Most Southern states, like Tennessee, did not expand Medicaid, and in those states a perfect storm has gathered force. What does it mean to live though a pandemic in a place with a high number of uninsured citizens, where many counties don’t have a single hospital, and where the governor delayed requiring folks to stay home? Across the South, we are about to find out.

Finally, on April 2, Mr. Lee acknowledged epidemiological reality and issued a stay-at-home order. The rest of the red-state governors will also capitulate to reality before this is all over. But the time for decisive action has long since passed, and their delays, like the president’s, will end up costing thousands of lives.

Viruses are not partisan. Science itself is not partisan. Nevertheless, Covid-19 has become a partisan issue here in the South because our governors have followed the lead of both the president, who spent crucial early weeks denying the severity of the crisis, and Fox News, which downplayed concerns about the pandemic as Democratic hysteria. That’s why every governor who has issued a deeply belated shelter-in-place order is a Republican.

In that March 16 conference call with mayors and county leaders around Tennessee, Mr. Lee offered some advice: “I want to encourage you to pray. I want you to pray for your citizens that are affected by economic downturns, by the sickness sweeping through the state. I want you to know that you’re being prayed for as leaders in your community that you will have wisdom and discernment.”

I, too, pray for my fellow Tennesseans. I pray for the success of researchers racing for a vaccine. I pray for the safety of every medical team working to save lives. But I also pray for our leaders to lead, to put the safety of their citizens far, far above partisan pandering. And when the entire medical community — people who are putting their very lives on the line for us — are begging for help, the answer isn’t prayer alone. It’s also action."

Opinion | In the American South, a Perfect Storm Is Gathering - The New York Times
Posted by John H Armwood II at 8:23 PM