Will Anger About Voter Suppression Drive Turnout in the Georgia Runoff for Secretary of State? | The New Yorker 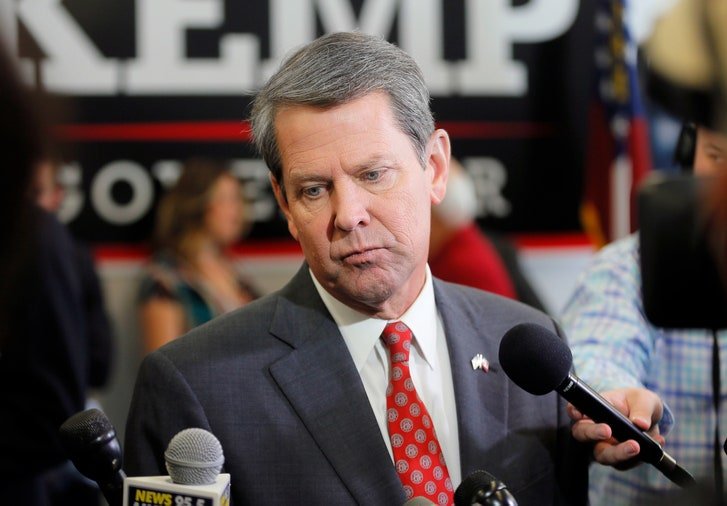 "During the high-profile race for governor of Georgia—which the Republican Brian Kemp won, beating the Democrat Stacey Abrams by around fifty-five thousand votes—another political office came under an unusual amount of scrutiny: secretary of state. That was Kemp’s job, until shortly after he declared victory in the governor’s race, when he stepped down from the position. In Georgia, the secretary of state is responsible for overseeing elections, and Kemp provoked outrage with his refusal to resign from the post while running for another office. He was also accused of suppressing the vote, by purging the rolls of more than three hundred thousand voters, and of undermining confidence in the result by allowing the use of a “dated, vulnerable voting system that provides no independent paper audit trail,” as a civil lawsuit filed in September, and naming Kemp as a defendant, put it. When Kemp finally stepped down after the election, the state’s outgoing governor, the Republican Nathan Deal, appointed an interim secretary of state, Robyn Crittenden; she is also a defendant in a lawsuit, filed last Friday, that seeks a new election for lieutenant governor on account of a “large number of missing votes and other significant election irregularities.”

As it happens, that election, in November, did not decide upon Kemp’s replacement: the race for the next secretary of state, between the Democrat John Barrow and the Republican Brad Raffensperger, a state representative, went to a runoff, because Raffensperger, who earned less than one percentage point more of the vote than Barrow, did not reach the fifty-per-cent-plus-one-vote threshold required to settle elections in Georgia. On Tuesday, when the runoff election will be held, the many people who were furious about the way Kemp fulfilled his duties have the chance to pick someone who might perform the task better. The question, though, is how many of them will show up.

“I think people aren’t as much interested in this race,” Adrian Durden, a fifty-nine-year-old electrician who is currently unemployed and who has voted for both Democrats and Republicans in the past, told me. Durden, who is African American, lives in southeast Atlanta. “I don’t even know the people who are running,” he said. Turnout for the runoff is unlikely to resemble the historic levels seen in the governor’s race, in which nearly four million Georgians voted. An organizer for the New Georgia Project, a voter-mobilization group that Abrams once directed, told the Washington Post that she had to let go of her canvassers in suburban Atlanta because she did not have enough funding. At a planned televised debate recently, Raffensperger was a no-show—the Republican attended a fundraiser in rural Georgia instead—leaving Barrow “debating against an empty podium,” as the Atlanta Journal-Constitution put it.

Still, Durden said, he would be voting—“straight Democrat.” He added, “I just want to vote against the party in office now. It wasn’t a fair election.” Seni Alabi-Isama, a forty-year-old restaurateur in Statesboro, in the middle of the state, agreed. “It’s clear that something needs to be done with how voting is handled in Georgia,” he said. Alabi-Isama, who is also African-American, said he, too, planned to vote for Barrow, though he didn’t express unchecked enthusiasm for the candidate. “Barrow might not yield the result we want,” he said. “But it’s the only option we have to vote against the party that sustains the current system.”

Barrow, who is white, strikes a decidedly moderate tone—for one thing, he, like Raffensperger, and in contrast to Stacey Abrams, is in favor of current voter-identification laws. He has largely staked his chances on pushing for a transition to paper ballots, which many deem a safer as well as cheaper alternative to the machines that Georgia currently uses. Raffensperger, meanwhile, has defended the use of electronic voting machines as well as Kemp’s culling of voter rolls.

Marilyn Marks is the executive director of the Coalition for Good Governance, a nonpartisan nonprofit which filed Friday’s lawsuit against Georgia’s interim secretary of state. “Barrow is clearly committed to the universal recommendation of cybersecurity and computer-science experts,” she told me over e-mail, citing his support for “hand-marked paper ballots, counted by machines and audited for accuracy.” Raffensperger, on the other hand, “has fallen for the vendor-promoted next generation of un-auditable high-risk touchscreen voting machines that turn votes into barcodes, with little improvement over the current machines that plague Georgia’s elections,” she wrote.

On Saturday afternoon, on a conference call with journalists, Abrams talked up Barrow, too, as well as the Democrat in a runoff for Georgia’s next public service commissioner. Of Barrow, she said, “He understands that rampant voter suppression on Election Day and during early vote disincentivized voters.” Abrams mentioned issues that her new political-action group, Fair Fight Action, seeks to address with a federal lawsuit alleging gross mismanagement of the recent election, including long lines, registration-database issues and missing absentee ballots disproportionately affecting the poor and minorities. “While we’ve been able to use the court systems to force some of these changes, we need a leader who will do these voluntarily,” she said.

Everlean Burston, a fifty-nine-year-old house cleaner in Decatur, Georgia, near Atlanta, voted for Abrams last month, in what she called the second most disappointing election of her life after the 2016 election. She told me that a lot of people weren’t able to vote—especially in black neighborhoods like the one she grew up in—“because of the lack of machines and messed-up machines.” She went on, “I’m frustrated about what happened. It’s like a cycle. A never-ending cycle, a merry-go-round. It keeps spinning, but there’s no results for the people who are really, really in trouble.” She sighed. She’ll be voting on Tuesday, she said. “I’ll vote Democrat. Something has got to be better than what it is now.”

Will Anger About Voter Suppression Drive Turnout in the Georgia Runoff for Secretary of State? | The New Yorker
Posted by John H Armwood II at 8:26 PM