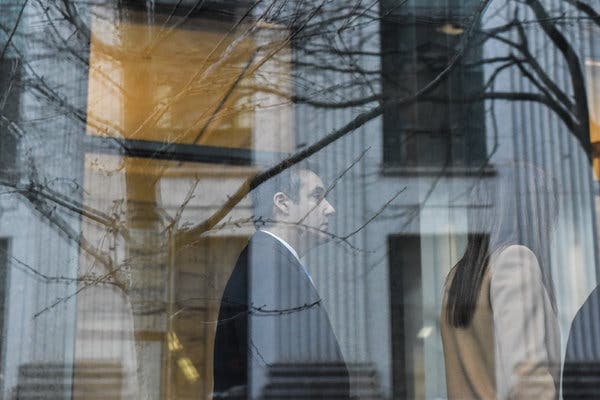 Michael Cohen said President Trump led him into darkness. The courts brought him into the light.

Michael Cohen at the Federal Courthouse in Lower Manhattan on Wednesday.

Photo by: Stephanie Keith for The New York Times

There have been some dark days in America in recent months, days when its astonished citizens have had reason to wonder whether its institutions and even its ideals — the Congress, the electoral process, the notion that honesty matters — had become too brittle to withstand what could seem like relentless assault.

Wednesday was not one of those days.

A federal judge in Manhattan sentenced Michael Cohen, Donald Trump’s former lawyer, to three years in prison over what the judge called a “veritable smorgasbord” of crimes, most important, paying hush money to two women who said they slept with his ex-boss. Those payments enabled Mr. Trump to conceal the accusations from voters in the closing weeks of the campaign. United States District Judge William Pauley said this violation of campaign finance laws created “insidious harm to our democratic institutions.” In so ruling, he demonstrated that those institutions have some life in them yet.

Mr. Trump has called the payments to the two women “a simple private transaction.” But prosecutors made clear that the payments were illegal campaign contributions because their purpose was to help win the election. This was reinforced shortly after Mr. Cohen’s sentencing, when federal prosecutors disclosed that, in a deal to avoid prosecution, the publisher of The National Enquirer admitted that, to help elect Mr. Trump president, and with his cooperation, it had paid $150,000 to buy the silence of one of the women, Karen McDougal, a former Playboy model who said she’d had a 10-month affair with Mr. Trump.

With prosecutors already having said in their sentencing memo for Mr. Cohen that “he acted in coordination with and at the direction of Individual-1" — that’s President Individual-1 to you — this is even more evidence they believe Mr. Trump conspired to commit a felony.

In pleading for mercy, Mr. Cohen told the judge a sad tale of a starry-eyed man led astray by “a blind loyalty to this man that led me to choose a path of darkness over light.”

“Time and time again,” he said of his ex-employer, “I felt it was my duty to cover up his dirty deeds rather than to listen to my own inner voice and my moral compass.”

Lest a tear come to your eye, let’s be clear that Mr. Cohen’s “path of darkness” began with a sleazy legal practice years before meeting Mr. Trump. Prosecutors have made a persuasive case that the moral compass of Mr. Cohen, who also pleaded guilty to tax evasion and bank fraud, didn’t locate true north until he was caught and his home, office and hotel room were raided by the F.B.I.

Mr. Cohen, once just an example of one kind of person Mr. Trump draws close to him, is now also a case study in where that association can leave them.

It started out so hopefully. “He’s a very smart person,” Mr. Trump told The New York Post in 2007, after Mr. Cohen began buying units in Trump buildings. That was around the time, according to prosecutors, Mr. Cohen got a condo board ousted after its members tried to take the Trump name off a building in which he lived. Soon Mr. Cohen, who had been earning about $75,000 a year, became the $500,000-a-year executive vice president and general counsel of the Trump Organization.

It was an interesting time for Mr. Trump, and perhaps for the Russia investigation. By then Mr. Trump was being shunned by virtually all American banks that did not have his daughter on the board of directors. The Washington Post said almost all his deals after that time were in cash. And around then, there were more deals with shady Russian characters, with Donald Trump Jr. saying that money was “pouring in from Russia.”

In 2015, while Mr. Trump was running for president, he had Mr. Cohen reach out to see if President Vladimir Putin of Russia could help seal a Moscow real estate deal that could bring in hundreds of millions of dollars, according to the special counsel’s office.

Meanwhile, in the presidential campaign, Mr. Cohen continued showing the boss what a tough guy he could be, playing attack dog on TV and with the media.

When reporters asked him about a claim years ago by Mr. Trump’s first wife that Mr. Trump had tried to rape her, he warned them off, gangland style. Tread lightly, Mr. Cohen said, “because what I'm going to do to you is going to be … disgusting.”

Then, before Mr. Cohen could truly savor his boss’s electoral victory, it all came crashing down.

Mr. Cohen also faced repercussions for his lies to Congress about his role in the Moscow deal, to which he also pleaded guilty and was sentenced on Wednesday to a two-month term concurrent with that for the other charges.

He has extensively cooperated with the special counsel, Robert Mueller. American justice and rule of law have recalled Michael Cohen to the path of light, and it was a fine thing, on Wednesday, to witness their resilience, and be reminded of their majesty."