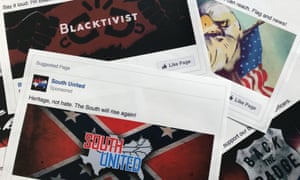 "Russian online propagandists aggressively targeted African Americans during the 2016 US election campaign to suppress votes for Hillary Clinton and help Donald Trump, according to new research.

Black turnout declined in 2016 for the first presidential election in 20 years, according to the US census bureau, falling to less than 60% from a record high of 66.6% in 2012. Exit polls indicated that black voters strongly favoured Clinton over Trump.

The new findings on the secret activities of the Internet Research Agency (IRA), known as the Russian government’s “troll factory”, were revealed on Monday in a pair of reports to the US Senate’s intelligence committee. One was led by experts from Oxford University and the other by New Knowledge, an American cybersecurity firm.

New Knowledge said Russia had waged a five-year “propaganda war” against the US public. The Oxford researchers said that while the propaganda was meant to “push and pull” Americans in different directions, “what is clear is that all of the messaging clearly sought to benefit the Republican party – and specifically, Donald Trump”.

Both reports faulted the major social media companies – Facebook, Twitter and Google – for what they said were ongoing failures to turn over exhaustive data to US authorities investigating the Russian campaign. They said some executives had “misrepresented or evaded” and “dissembled” in statements to Congress.

Mark Warner, the committee’s senior Democrat, said new laws were needed to tackle a crisis around social media. “These attacks against our country were much more comprehensive, calculating and widespread than previously revealed,” said Warner.

More than a dozen Russians have been criminally charged with hacking and other online activity by special counsel Robert Mueller and other US prosecutors investigating Moscow’s interference in the 2016 campaign.

"The new reports said that while it was well known that Russian trolls flooded social media with rightwing pro-Trump material, their subtler efforts to drive black voters to boycott the election or vote for a third-party candidate were under-appreciated.

One popular bogus Facebook account created by the Russians, Blacktivist, attracted 4.6 million “likes”. It told followers in the final weeks of the campaign that “no lives matter to Hillary Clinton”, that black people should vote for the Green Party candidate Jill Stein, and that “not voting is a way to exercise our rights”.

Some black Americans were even weaponised as unwitting “human assets” for the Russian campaign, according to the researchers, who said operatives in St Petersburg worked to recruit people in the US to attend rallies and hand out literature.

The Oxford researchers found black Americans were also targeted with more advertisements on Facebook and Instagram than any other group. More than 1,000 different advertisements were directed at Facebook users interested in African American issues, and reached almost 16 million people.

The material was intended to inflame anger about the skewed rates of poverty, incarceration and the use of force by police among black Americans to “divert their political energy away from established political institutions,” the report said, adding that similar content was pushed by the Russians on Twitter and YouTube.

The New Knowledge researchers agreed that the “most prolific IRA efforts” on Facebook and Instagram were aimed at black Americans in what they called an “immersive influence ecosystem” connecting many different pages posting information and reinforcing one another.

In addition to the online posts telling black people their votes would not matter or urging them to vote third-party, Russian operatives tricked people with “vote by text message” scams and tweets designed to create confusion about voting rules, according to New Knowledge.

New Knowledge said the social media propaganda campaign should be seen as the third front in Russia’s interference in the 2016 election, together with the hack and theft of Democratic party emails that were passed to WikiLeaks, and the attempt to hack online voting systems across the US.

The Oxford researchers said the lack of human editors on platforms such as Facebook was enabling propagandists. “Obviously, democracies need to take computational propaganda seriously as a threat to their public life,” they said."