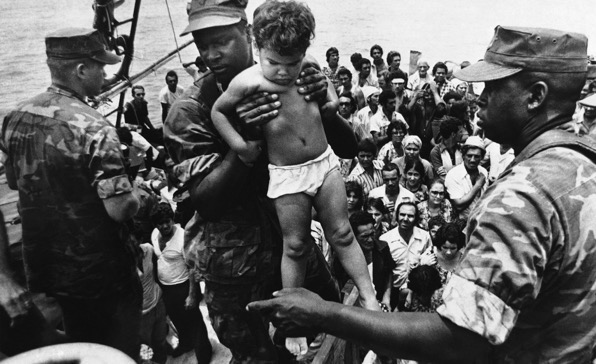 "Last Sunday, as Border Patrol agents were tear-gassing Central American asylum seekers, including parents with their toddlers, more than 40,000 other migrants were being held in detention facilities across the United States.

Like the Trump administration’s “zero tolerance” policy enacted earlier this year, which separated children from their parents while in detention, the tear-gassing of Central Americans immediately gripped the nation’s attention and was decried by many as inhumane. There was almost no mention of the fact that if these migrants did ever manage to cross the border and apply for asylum, many of them would end up in some form of detention or other.

But detaining migrants was not always seen as normal. On the contrary, immigration detention has a short-lived and complicated history.

The United States first imposed immigration detention in the late 19th century. But by the early 1950s, detaining migrants no longer seemed necessary. European and Asian migration had fallen drastically as a result of the Immigration Act of 1924 and the Great Depression. In 1954, officials from the Immigration and Naturalization Service concluded that a vast majority of migrants could be released on conditional “parole,” while their cases were being reviewed. Detention was reserved for migrants who were deemed likely to abscond or who posed a threat to national security or public safety. By January 1955, only four people in immigration custody were seeking entry into the country.
Reflecting on this change, in 1958 the Supreme Court, in Leng May Ma v. Barber, held that “physical detention of aliens is now the exception, not the rule,” pointing out that “certainly this policy reflects the humane qualities of an enlightened civilization.”

How did we move so far away from the notion that detention — and not just family separation and tear-gassing — is inhumane? How did holding more than 40,000 migrants behind bars come to be seen as normal?

The answer lies with the migration of Cubans and Haitians in the 1980s. The change was prompted by the Mariel Boatlift, when approximately 125,000 Cubans fled for the United States in a highly politicized migration that garnered national and international media attention and inspired fear among many Americans. The unfolding of these events can be seen in the stories of individuals like Alberto Herrera, who shared his experiences with Mark Hamm, a professor of criminology at Indiana State. During the 1980s, Americans came to see Mr. Herrera and hundreds of other Cuban exiles as such a dangerous threat that they once again turned to detention as an acceptable way to manage immigration.

Born in Havana in 1952, Mr. Herrera was the eldest of seven children. Like many an elder sibling, he felt responsible for his family’s well-being. But life in Cuba was hard and he was regularly unemployed. His family often went hungry. At the age of 18, he decided to do something about it: He walked into a government grocery store in Havana, hid two pounds of goat cheese under his jacket and fled. He did not get far. He was arrested and imprisoned for seven years. When he was released, he was even less prepared to find a job than he had been before spending time in prison. On Sept. 21, 1979, less than five months after his release, Mr. Herrera was sentenced to 13 years for stealing two pairs of pants.

But on June 24, 1980, Mr. Herrera’s luck seemed to change. That day, a guard came to his cell and told him that he was going to be placed on a boat headed to the United States. Mr. Herrera didn’t know it, but two months earlier, Fidel Castro’s government had announced that anyone who desired to leave Cuba could depart from the port of Mariel. In response, thousands of Cuban émigrés who were living in Florida set out in shrimpers, yachts and sailboats to pick up their relatives. When the émigrés arrived at the port of Mariel, however, the Cuban government informed them that if they wanted to take their relatives to the United States, they also had to transport anyone else the government wanted them to take. On some of those boats, government officials forcibly placed mentally ill individuals and prison inmates, including Mr. Herrera.
As he sailed across the Florida straits, Mr. Herrera heard other passengers talking about Disneyland and expensive cars. He pictured himself holding a job and finally being free.

When Mr. Herrera’s boat anchored in Florida, however, his dreams of freedom sank. News had spread swiftly that Mr. Castro’s government had sent criminals and mentally ill people among the arriving exiles. Although very few of the exiles had committed crimes, much less serious ones, fear of this wave of immigrants became widespread. This fear, fueled by rising crime rates in Miami and other communities where the Cuban exiles settled, led many Americans to demand the detention of the new arrivals.

Upon questioning Mr. Herrera, American officials determined that he had been in prison in Cuba and sent him, along with the other exiles suspected of having committed crimes, to the Federal Correctional Institution at Talladega, Ala.

Thousands of other Cuban exiles, who officials believed not to be criminals, were placed in military bases around the country. There, the exiles waited to be sponsored by someone (or some institution) who agreed to take care of them until they could settle on their own.

As the months went by, most exiles left the military bases, but those who had no family members or acquaintances in the United States often had difficulty finding sponsors. This placed them in an impossible situation. Without sponsorship, the only way they could leave the camps was by leaving the United States. But government officials could not deport them because the Castro government refused to take them back.

These exiles, many of whom were labeled “antisocial” but not accused of having committed any crime, were to remain in cages in the United States on an indefinite basis, with no prospects of being set free. Americans had come to fear these exiles so much that few of them protested their imprisonment and only a small number of legal workers tried to help them. The practice of detention was seen as necessary and normal.

By 1982, about 400 Mariel Cubans who still had not been sponsored were sent to prison, primarily to the maximum-security penitentiary in Atlanta. These exiles, it seemed, no longer belonged in a refugee resettlement camp, which was intended as an interim location to await sponsorship. Now they belonged in a prison.
Those sent to the Atlanta penitentiary joined the ranks of Cubans from the Mariel Boatlift who had broken the law in the United States (sometimes by committing misdemeanors) and those who were believed to have committed serious crimes in Cuba.

They also encountered Alberto Herrera. When he had arrived at Talladega, Mr. Herrera was told that his release depended on good behavior, but even though he had an exemplary record, he was never released because he had no sponsor. Instead, on Feb. 14, 1981, he was sent to the Atlanta prison.
An encampment for Haitian refugees at Guantánamo Bay, Cuba, in 1994.David Scull/The New York Times

An encampment for Haitian refugees at Guantánamo Bay, Cuba, in 1994.David Scull/The New York Times
Government officials were determined not to allow another Mariel Boatlift. They drafted contingency plans demanding the establishment of “suitable facilities to hold 10,000 to 20,000” migrants, so that if another large migrant group arrived, they would be prepared. They also conceived of detention as a way to deter migrants — particularly Haitians, who had been fleeing their country since 1971 — from setting sail to the United States. Up to that point, immigration officials still tended to follow the policy of releasing Haitians on parole pending a hearing and status determination, although they also intermittently detained arriving Haitian migrants. By 1981, immigration officials were detaining all Haitians who arrived without offering them the possibility of parole.

A year later, the I.N.S. formalized the practice of blanket detention with very limited parole and extended it to all migrants. This rule reversed the policy, which the Supreme Court had hailed in 1958, that had allowed most migrants to be released while their cases were determined.

Instead came the race to build a massive detention infrastructure, driven in large part by for-profit companies, like Corrections Corporation of America. As Mark Dow, author of “American Gulag: Inside U.S. Immigration Prisons,” notes, the first facility opened by the Corrections Corporation held immigrant detainees. Immigration detention came to be part and parcel of the growing incarceration trend of the 1980s.

It is because of this history that we now imprison undocumented migrants and asylum seekers. In 2016, the government detained nearly 360,000 people in a vast network of over 200 detention facilities, consisting of county jails and privately run prisons. In 2017, the cost of this colossal detention system was $2.6 billion.
Examining the practice of immigration detention today, as Central Americans are fleeing their home countries for the United States, demonstrates that the failure of our asylum system extends far beyond the instances in which migrants are tear-gassed and children are separated from their parents. The system itself is designed to treat migrants and asylum seekers like felons to be placed behind bars.

But it does not have to be like this. The history of immigration detention shows us that a more cost-effective and humane way of dealing with migrants and asylum seekers is possible. After all, in the years between 1954 and 1980, we already had just such a system in place.

Ana Raquel Minian (@AnaRMinian) is a professor of history at Stanford and the author of “Undocumented Lives: The Untold Story of Mexican Migration.”