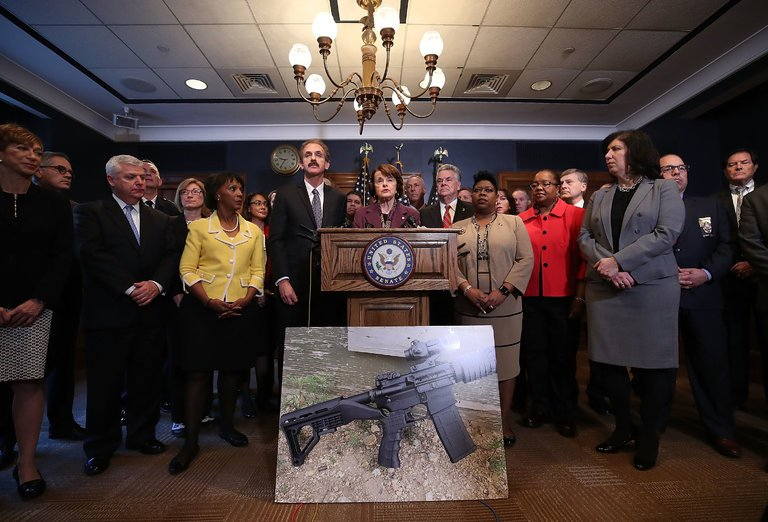 "The House Judiciary Committee just voted to make it impossible for a state to always keep people convicted of violent offenses from carrying concealed weapons.

That was just a detail in a very long day and really dreadful debate about the right to bear arms. In a normal world it might be the talk of the dinner table, but really, this week hardly anyone noticed.

On the one hand you had Garrison Keillor and Matt Lauer getting canned for sexual harassment. On the other there’s the president of the United States circulating a picture of a Muslim beating up a statue of the Blessed Virgin. About which, the presidential spokeswoman said, “Whether it’s a real video, the threat is real.”

And I haven’t even gotten to the tax bill. Or North Korea. Good grief.

But still, guns. Attention must be paid. If you count every gun crime that involves four or more victims as a mass shooting, we’ve had 397 so far this year, including the ungodly tragedies in Las Vegas and the small Texas church. You’d think the National Rifle Association would go away and be quiet for a month or two. But no, its minions in the House of Representatives were busy on Wednesday getting committee approval for a bill that would make it impossible for states to impose their rules about carrying concealed weapons on people who are visiting from someplace else.
Instead, we’re supposed to respect the judgment of the state whence they came. People, do you have this kind of confidence? We are having this conversation two weeks after Wisconsin eliminated the age limit for hunting licenses. So far there are 1,800 happy Wisconsinites under the age of 10 with the right to put their little fingers on the trigger, several less than a year old.

The bill’s opponents, all Democrats, lost every argument, but you had to give them credit for spunk. They dragged the fight on for more than six hours, dividing their time between pointing out that the gun murder rate in America is 297 times higher than in Japan, and offering amendments that attempted to make it clear how crazy the whole bill is.

All of which, including ones on violent offenses and domestic abuse, were defeated. Another would have allowed states to at least enforce their own laws aimed at keeping guns out of the hands of people convicted of assaulting a police officer.
No dice. “Once the exceptions start they will have no end,” said Representative Louie Gohmert of Texas.
As you know, there is absolutely no national consensus when it comes to the right to carry a concealed weapon in public places. You have Missouri, where you can just buy a gun and put it in your pocket. You have places like California, where people are carefully screened, trained and tested before they can get a gun and permit.

The N.R.A. yearns for a federal law that would allow Missourians to tote their guns around California, no questions asked. And here it is! The bill, known to its friends as “concealed carry,” could almost certainly pass the House. Even in this miserable year it probably couldn’t make the 60-vote mark in the Senate. (Good old Senate 60-vote rule. Remember that the next time people you like better are running the place.)
However, it could mess up an actual piece of gun reform that is so simple and sensible that even this Congress might be capable of approving it. A bipartisan group of senators, including Republican John Cornyn of Texas and Democrat Chris Murphy of Connecticut, are working on a bill that would make the current deeply flawed background check system a little more efficient.

“My worry is the House tries to get cute and combines the two,” said Murphy.
The Judiciary Committee debate was long and depressing in the extreme — at one point Representative Steven King of Iowa claimed a proposal to tighten a background check loophole on gun show sales would ruin “Christmas at the Kings’.”

The Republicans argued that people need to be able to carry guns — even in states where it’s against the law — because it just makes you safer. There’s an extremely popular vision of the average citizen drawing his concealed weapon and shooting a crazed gunman. This almost never happens in the real world.

But the myth lives on. Gun fans in Congress still talk about the shooting at a baseball practice that seriously wounded one of their colleagues as if it could have been avoided, if only all the lawmakers had gone to the game armed. During the committee meeting, Chairman Bob Goodlatte of Virginia and his followers suggested giving members of Congress the automatic right to carry concealed weapons, even if their home state wouldn’t permit it. Just to be safe. “I remember where I was the day I got the news that Gabby Giffords had been shot,” mused King.
It was indeed terrible. And Giffords responded by starting a national campaign for stricter gun regulation. Some people fix problems. Some just impose them on everybody else. Depends on the year.