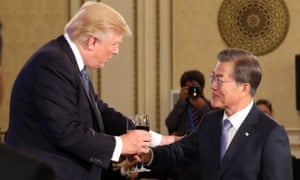 Japan get over it.  Japan, like the US lies about and hides it's history.  Japan engaged in massive sex slavery using Korean women.

"The menu at South Korea’s state banquet for Donald Trump has left a nasty taste in Japan, after the president was served seafood caught off islands at the centre of a long-running territorial dispute between Seoul and Tokyo.

Japanese officials have also complained about the decision to invite a former wartime sex slave to the event, held earlier this week during the second leg of Trump’s five-nation tour of Asia.

Conservative media in Japan labeled the banquet “anti-Japanese” for featuring shrimp from near Dokdo – a rocky outcrop known in Japan as Takeshima. Both countries claim sovereignty over the islands, which are administered by Seoul.

The menu also included grilled sole and beef ribs accompanied by a gravy made with 360-year-old soy sauce.

In another apparent jab at Japan, the guest list included Lee Yong-soo, who was forced to work in Japanese military brothels before and during the second world war.

Photographs from the dinner, held at the presidential Blue House, show Trump embracing the 88-year-old Lee after her name was announced at the banquet, according to South Korean media.

Japan’s top government spokesman, Yoshihide Suga, wondered if it had been wise to make such diplomatically sensitive gestures at a time when Japan, the US and South Korea were attempting to pressure North Korea into giving up its ballistic missile and nuclear weapons programmes.

“At a time when stronger coordination … is required to deal with the North Korea issue, and when President Trump has chosen Japan and South Korea as the first stops on his trip, there is a need to avoid making moves that could negatively affect that close coordination,” Suga said.

The Korea Herald quoted a South Korean presidential spokesman as saying: “Lee’s invitation was designed to deliver a message to Trump and ask him to have a balanced view of the comfort woman issue and historical dispute between South Korea and Japan.”