"Two years before his successful run for Congress, George Santos gave Long Island Republican officials a résumé that reads like a detailed road map of his lies.

When Representative George Santos of New York first expressed interest in running for a suburban New York City House seat in 2020, the Nassau County Republican Committee sent him a standard vetting questionnaire and asked to see his qualifications.

The résumé Mr. Santos handed over was impressive, particularly for a political neophyte.

He claimed to have graduated in the top 1 percent of his class at Baruch College, earned an M.B.A. at New York University and more than doubled revenue as a project manager at Goldman Sachs, according to a copy of the two-page document obtained by The New York Times. 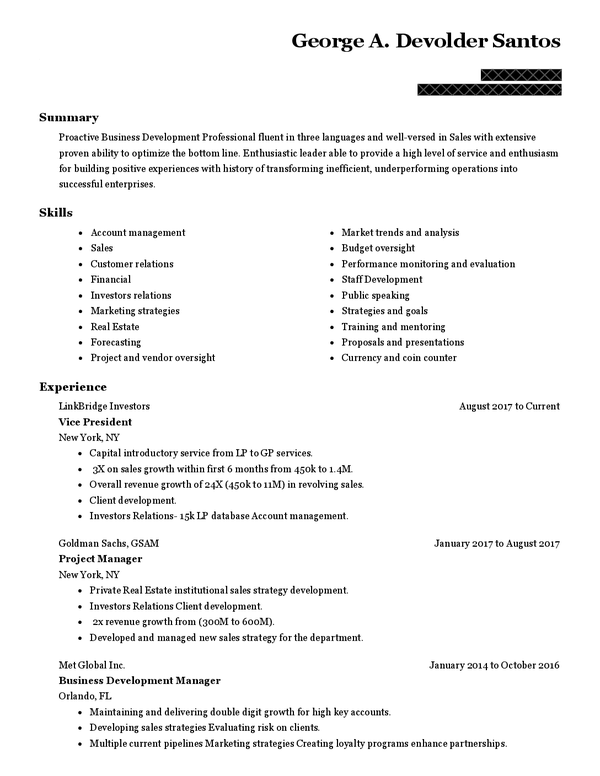 If the Nassau Republicans had dug into any of the claims, they would probably have found that much of Mr. Santos’s account was baldly fabricated. Instead, without another candidate interested in the race, they made a critical mistake: They took Mr. Santos’s word and offered their full backing, re-upping in 2022 to help deliver him to victory.

The episode marks an early example of a yearslong pattern of political deception, when Mr. Santos lied to his own party and faced no immediate repercussions. Three years later, it provided part of the backdrop on Wednesday when Nassau County committee leaders moved definitively to cut ties with Mr. Santos, calling him a serial liar and demanding he resign from Congress.

“He answered the questions — obviously not truthfully — but at that time we trusted him,” Joseph G. Cairo Jr., the committee chairman, told reporters at a news conference, vowing to put in place a more rigorous vetting process. He added: “We were duped here.”

Mr. Cairo said in a recent interview that Mr. Santos assured his vetting team that he had no arrest record and no knowledge of “anyone who might have a grievance” that could harm his candidacy.

The congressman quickly rebuffed the calls for his resignation, vowing on Twitteron Wednesday to continue serving despite a gusher of damaging disclosures that started with a Times investigation last month.

Joe Murray, a lawyer representing Mr. Santos, deferred a request for comment to the congressman’s Washington office. A spokeswoman there did not immediately reply.

The news conference is unlikely to quiet pressure on Republican leaders, who have been criticized for looking past questions about Mr. Santos’s truthfulness during last year’s campaign, especially after news media and Democratic operatives unearthed apparent contradictions or notable omissions that called into question his claim to be a successful financier.

The Times has been asking Mr. Santos for a copy of his résumé for weeks. A copy of the two-page version Mr. Santos submitted to the committee around January 2020 and obtained by The Times is the first that has become public. A Nassau County G.O.P. official said the committee could no longer locate the supplemental vetting questionnaire he submitted.

In other contexts, Mr. Santos was loath to offer dates and firm details on his academic and work history, which might have made them easier to disprove. In the résumé, he wrote them down in precise detail.

The document also shows how Mr. Santos fabricated and inflated his work pedigree. He said he worked as an associate asset manager at Citigroup from February 2011 to January 2014, with responsibilities as varied as “consumer education of new opportunities” and “investment orientation on LP base.” He claimed to have “2X revenue growth (300M to 600M)” in the just over seven months he worked as a project manager at Goldman Sachs in 2017 and to have developed a new sales strategy “for the department.”

Both companies have told The Times they have no record of his ever having worked there, and at the time Mr. Santos claims he was working at Citi, he was actually working for Dish Network as a customer service agent.

Not everything was a lie. Mr. Santos did work at MetGlobal, a Turkey-based hospitality technology company, as the résumé stated. And at the time he submitted the documents for vetting, there is evidence he was indeed working for LinkBridge Investors, a company that says it connects investors with fund managers. Mr. Santos’s claims that he helped the company triple sales within six months and increase its revenue 24 times could not be immediately verified, though.

He said he was skilled at real estate, budget oversight, public speaking, investor relations, proposals and presentations and even added he was experienced as a “currency and coin counter.” When it came to evaluating his own strengths, Mr. Santos did not hold back.

“Enthusiastic leader able to provide a high level of service and enthusiasm for building positive experiences with a history of transforming inefficient, underperforming operations into successful enterprises,” he wrote at the top of the résumé.

Evidently not satisfied that the written record was enough, Mr. Santos told Nassau County Republican officials that he was also part of a championship-winning volleyball team at Baruch, according to Mr. Cairo.

“He said he was a star and that they won the championship and he was a striker,” Mr. Cairo said on Wednesday.