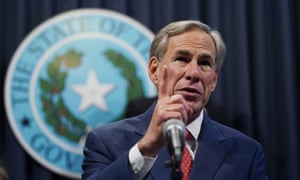 Erum SalamLast modified on Thu
1 Oct 2020 19.01 EDT
Texas is already one of the hardest places in America to vote, and Greg Abbott, the Texas governor, on Thursday made it even harder.
The announcement from Abbott, a Republican, limits an executive order from July that made it modestly easier for voters to return their ballots during the pandemic. Texas usually only lets voters return their mail-in ballots in person on election day, but Abbott’s July order said voters could return their ballots in person to the election clerk’s office earlier. He also extended early voting by six days.
As a result, some of the biggest counties in the state had planned to offer voters multiple places to drop off their ballots. Harris county, the most populous in the state, planned to let voters return their ballots at 11 of the clerk’s annex offices around the county. Travis county, home of Austin, planned to offer four places to return their ballots. But the move drew backlash within his own party; Republicans sued the governor over the changes.
On Thursday, Abbott backtracked on his earlier order and issued a new executive order only allowing counties to offer voters a single place to return their ballots. Abbott’s order also said officials had to let official poll-watchers inspect the process.
Abbott’s order quickly drew outcry and accusations of voter suppression. Texas already severely limits mail-in voting to those who are 65 and older, or who meet a select few other requirements. The state has aggressively opposed a slew of lawsuits seeking to ease those restrictions amid the pandemic. Texas has seen massive growth among Hispanic and other minority voters in recent years, and many of the restrictions in place are seen as a blatant effort to preserve white political power.
Harris county clerk Chris Hollins said the new proclamation issued by Abbott “will result in widespread confusion and voter suppression”.
“Multiple drop-off locations have been advertised for weeks,” Hollins said in a statement. “Our office is more than willing to accommodate poll watchers at mail ballot drop-off locations. But to force hundreds of thousands of seniors and voters with disabilities to use a single drop-off location in a county that stretches over nearly 2,000 sq miles is prejudicial and dangerous.”
Abbott’s Thursday order is the latest in a series of moves Republicans across the country have made to limit how Americans can return their mail-in ballots. In Ohio, Frank LaRose, the state’s top election official, is seeking to limit each county to a single drop-box for voters to return their ballots. In Pennsylvania, the Trump campaign is seeking to block the use of drop boxes. Voting advocates have stressed the need for in-person drop-off locations amid concerns about the reliability of the United States Postal Service after widespread delays this summer.

Republicans are on the verge of losing, so Governor Abbott is trying to adjust the rules last-minute

In early September, the Texas supreme court blocked Harris county from sending absentee ballots to all of its 2.4 million registered voters. The lawsuit was brought by Texas attorney general Ken Paxton.
In an interview with the Guardian, Paxton said he opposes universal mail-in ballots, citing widespread voter fraud. Several studies and investigations have shown voter fraud is not a widespread problem.
“I think that’s a wonderful utopia – people who don’t want to commit fraud. Fraud is much more easily associated with mail-in ballots because we don’t have any proof of who actually voted,” Paxton said. “If you open the door, your vote doesn’t matter as much. It’s being diluted by fraudulent voters. You’d be giving up your vote by making it easier for everyone to mail in their ballot.”
The Texas Democratic party was quick to condemn Abbott’s order.
“Republicans are on the verge of losing, so Governor Abbott is trying to adjust the rules last-minute,” Gilberto Hinojosa, the chairman of the state Democratic party said in a statement, describing state Republicans as “cheaters”.
“Make no mistake, Democracy itself is on the ballot. Every Texan must get out and vote these cowards out!”