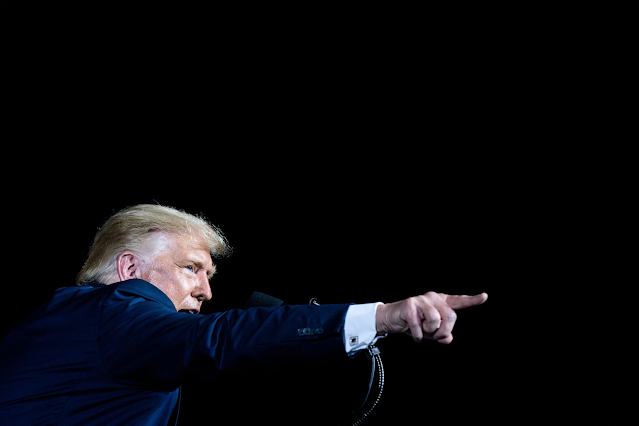 Opinion
Trump’s Army of Angry White Men
This group will continue to fight for Trump and he knows that.
By Charles M. Blow
Opinion Columnist
Credit...Anna Moneymaker for The New York Times
This election will test the country’s core.
Who are we? How did we come to this? How did this country elect Donald Trump and does it have the collective constitution to admit the error and reverse it?
At the moment, Joe Biden is leading in the polls, but the fact that Trump is even close — and still has a chance, however slim, to be re-elected — is for a person like me, a Black man, astounding. I assume that there are many women, Muslims, immigrants, Mexicans and people from Haiti and African nations he disparaged who feel the same way.
Trump is the president of the United States because a majority of white people in this country wanted him to be. Perhaps some supported him despite his obvious flaws, but others undoubtedly saw those flaws as laudable attributes. For the latter, Trump’s racism was welcome in the coven.
Still, according to the latest Quinnipiac poll, more white people support Trump than Biden. This is primarily a function of white men who prefer Trump over Biden 57 percent to 36 percent. Most white women support Biden, which is a reversal from the last election, when a plurality voted for Trump.
The white racist, sexist, xenophobic patriarchy and all those who benefit from or aspire to it are in a battle with the rest of us, for not only the present in this country but also the future of it.
The Republican Party, which is now without question the Party of Trump, has become a structural reflection of him. They see their majorities slipping and the country turning brown with a quickness, and they are becoming more tribal, more rash, more devious, just like him.
Like Trump, the Republican Party sees a future in which the only way they can win is to cheat. That is why they are stacking the courts. That is why they openly embrace tactics that are well known to result in voter suppression. That is why they gerrymander. That is why they staunchly oppose immigration.
Trump’s base of mostly white men, mostly without a college degree, see him as the ambassador of their anger, one who ministers to their fear, consoles their losses and champions their victimhood. Trump is the angry white man leading the battle charge for angry white men.
The most optimistic among us see the Trump era as some sort of momentary insanity, half of the nation under the spell of a conjurer. They believe that the country can be reunited and this period forgotten.
Editors’ Picks
2 Broke Artists Started a Bakery at Home. It’s a Pandemic Hit.
He Was a Rising Jazz Pianist. Then His N.Y.C. Dreams Were Shattered.
The White Issue: Has Anna Wintour’s Diversity Push Come Too Late?
Continue reading the main story
ADVERTISEMENT
Continue reading the main story
I am not one of those people. I believe what political scientist Thomas Schaller told Bloomberg columnist Francis Wilkinson in 2018: “I think we’re at the beginning of a soft civil war.” If 2018 was the beginning of it, it is now well underway.
Trump is building an army of the aggrieved in plain sight.
It is an army with its own mercenaries, people Trump doesn’t have to personally direct, but ones he has absolutely refused to condemn.
When it comes to the former Ku Klux Klan leader David Duke, the young neo-Nazis who marched in Charlottesville and the far-right fight club the Proud Boys, Trump finds a way to avoid a full-throated condemnation, often feigning ignorance.
“I don’t know anything about David Duke,” Trump said when he ran in 2016. That of course was a lie. In fact, Trump is heir to Duke’s legacy.
In 1991, when Duke ran unsuccessfully to be governor of Louisiana but received a majority of the white vote in the state, Trump told CNN’s Larry King, “I hate seeing what it represents, but I guess it just shows there’s a lot of hostility in this country. There’s a tremendous amount of hostility in the United States.”
King responded, “Anger?”
Then Trump explained: “It’s anger. I mean, that’s an anger vote. People are angry about what’s happened. People are angry about the jobs.”
It is that very anger that Trump harnessed to win the presidency: anger over racial displacement disguised as economic anxiety.
Trump has bottled defiance and sold the serum to his acolytes and henchmen. He is fighting for white power and white heritage — he mourns the loss of “beautiful” monuments to racists while attacking racial sensitivity training. He is fighting to keep out foreigners, unless they are from countries like Norway, an overwhelmingly white country. He is fighting for people to be foolish, like not wearing a mask in the middle of a global pandemic caused by an airborne virus.
Trump is fighting for these people and they will continue to fight for him. Trump knows that. And he keeps them angry because he needs them angry. There is a strong chance that Trump won’t win the coming election, but there is also a strong chance that he will win a majority of white men.
The question then is how an angry Trump and those angry men will react to defeat and humiliation."
Opinion | Trump’s Army of Angry White Men - The New York Times
Posted by John H Armwood II at 8:22 AM