In His Own Words, Trump on the Coronavirus and Masks 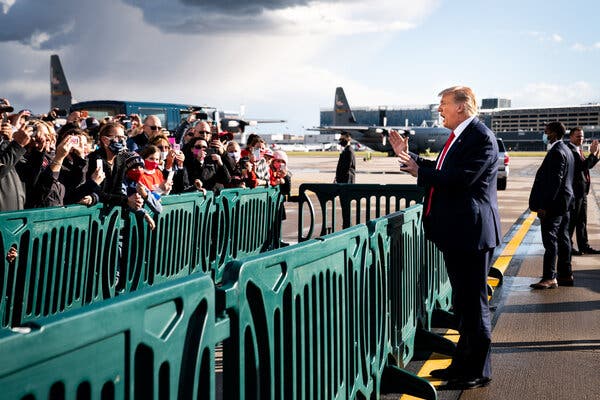 "In His Own Words, Trump on the Coronavirus and Masks

During the pandemic, the president has expressed confidence that the virus would quickly go away and skepticism over the effectiveness of face coverings.

President Trump — who insisted when the coronavirus first emerged that it would not be a threat in the United States — spent months playing down the effectiveness of masks, initially refused to be photographed with one on and this week mocked former Vice President Joseph R. Biden Jr. for wearing one.

He has softened his tone on masks and has been seen wearing one with a presidential seal, and in the summer he began encouraging Americans to wear them. But even his endorsements of masks — which health officials say are a key way to slow the spread of the virus — have come with caveats that have muddled the message.

One example: At the presidential debate on Tuesday, after saying that he wore masks “when needed,” Mr. Trump claimed that Dr. Anthony S. Fauci, the leading U.S. official on infectious diseases, had initially said that “masks are not good — then he changed his mind.” (Dr. Fauci rejected the claim, saying on Thursday that he had long been “begging people to wear masks.”)

It was the latest in Mr. Trump’s pattern of playing down the seriousness of the coronavirus. Here are some of his most notable statements since the beginning of the pandemic.

On his own use of masks and their effectiveness.

Trump Downplays Masks and Mocks Biden for Wearing Them

“President Trump, you have begun to increasingly question the effectiveness of masks as a disease preventer, and in fact, recently you have cited the issue of waiters touching their masks and touching plates. Are you questioning —” “No, I think masks are OK. You have to understand, if you look, I mean, I have a mask right here. I put a mask on, you know, when I think I need it. Tonight as an example, everybody’s had a test, and you’ve had social distancing and all of the things that you have to — but I wear masks when needed. When needed, I wear masks.” “OK, let me ask —” “I don’t wear masks like him — every time you see him, he’s got a mask. He could be speaking 200 feet away from — he shows up with the biggest mask I’ve ever seen.” “Masks make a big difference. His own head of the C.D.C. said if we just wore masks between now — if everybody wore masks in social distance between now and January, we’d probably save up to 100,000 lives. It matters.” “And they’ve also said the opposite.” “And no serious person said the opposite. No serious person.” “Dr. Fauci. Dr. Fauci said they didn’t.” “He did not say the opposite.” “He said very strongly, masks are not good. Then he changed his mind, he said masks are good. I’m OK with masks.”

April 3, at the White House: “The C.D.C. is advising the use of nonmedical cloth face covering as an additional voluntary public health measure. So it’s voluntary. You don’t have to do it. They suggested for a period of time, but this is voluntary. I don’t think I’m going to be doing it.”

July 19, to the Fox News host Chris Wallace: “I don’t agree with the statement that if everybody wears a mask, everything disappears.”

Aug. 13, at the White House: “My administration has a different approach: We have urged Americans to wear masks, and I emphasized this is a patriotic thing to do. Maybe they’re great, and maybe they’re just good. Maybe they’re not so good.”

Sept. 7, asking a reporter to remove a mask while asking a question: “If you don’t take it off, you’re very muffled.”

Sept. 29 at a presidential debate: “I think masks are OK. You have to understand, if you look — I mean, I have a mask right here. I put a mask on when I think I need it. Tonight, as an example, everybody’s had a test, and you’ve had social distancing and all of the things that you have to.”

He continued: “When needed, I wear masks. I don’t wear masks like him,” he said of Mr. Biden. “Every time you see him, he’s got a mask. He could be speaking 200 feet away from them, and he shows up with the biggest mask I’ve ever seen.”

Early predictions that the virus would not be a threat.

After initially downplaying the potential severity of the coronavirus pandemic and sharing false and misleading information, President Trump has changed his position on key aspects of the crisis. Here are five examples.

“Have you been briefed by the C.D.C.?” “I have.” “Are there worries about a pandemic at this point?” “No, we’re not at all, and we have it totally under control. It’s one person coming in from China, and we have it under control. It’s going to be just fine. I’ve always known this is a real — this is a pandemic. I felt it was a pandemic long before it was called a pandemic. Now the Democrats are politicizing the coronavirus. We did one of the great jobs. You say, ‘How’s President Trump doing?’ They go, ‘Oh, not good, not good.’ They have no clue. They don’t have any clue. And this is their new hoax. I’ve always viewed it as very serious. There was no difference yesterday from days before. I feel the tone is similar, but some people said it wasn’t. We’re — what do you have, a very small number of people in the country right now with it? It’s like around 12. Many of them are getting better. Some are fully recovered already. So we’re in very good shape. We’re going to be pretty soon at only five people. And we could be at just one or two people over the next short period of time. So you’re talking about 2.2 million deaths — 2.2 million people from this. And so if we could hold that down, as we’re saying, to 100,000 — it’s a horrible number, maybe even less, but to 100,000, so we have between 100,000 and 200,000. We all together have done a very good job. The flu in our country kills from 25,000 people to 69,000 people a year. That was shocking to me. But that’s a little bit like the flu. It’s a little like the regular flu that we have flu shots for. And we’ll essentially have a flu shot for this in a fairly quick manner. View this the same as the flu. This is not the flu. It’s vicious. It is so contagious. Flu has never been like that, and there is — flu is contagious, but nothing like we’ve ever seen here. Anybody that wants a test can get a test. That’s what — the bottom line. Anybody right now and yesterday, anybody that needs a test gets a test. They’re there. They have the tests. And the tests are beautiful. And in some cases, they’re in California where we have too many. And then in other cases, the distribution could be a little bit better for certain areas, but we’ve done a good job on testing.”

After initially downplaying the potential severity of the coronavirus pandemic and sharing false and misleading information, President Trump has changed his position on key aspects of the crisis. Here are five examples.Doug Mills/The New York Times

Jan. 30, in Warren, Mich.: “We have very little problem in this country at this moment — five. And those people are all recuperating successfully.”

Feb. 14, addressing the National Border Patrol Council: “There’s a theory that, in April, when it gets warm — historically, that has been able to kill the virus. So we don’t know yet; we’re not sure yet.”

Feb. 24, in a tweet: “The Coronavirus is very much under control in the USA. We are in contact with everyone and all relevant countries. CDC & World Health have been working hard and very smart. Stock Market starting to look very good to me!”

Feb. 26, at a White House news conference, commenting on the country’s first reported cases: “We’re going to be pretty soon at only five people, and we could be at just one or two people over the next short period of time. So we’ve had very good luck.”

Feb. 26, flanked by top health officials from government agencies: “The risk to the American people remains very low. We have the greatest experts, really in the world, right here.”

March 7, asked at Mar-a-Lago whether he was concerned that the virus was getting closer to the White House and Washington: “No, I’m not concerned at all. No, I’m not. No, we’ve done a great job.”

In His Own Words, Trump on the Coronavirus and Masks
Posted by John H Armwood II at 8:53 AM