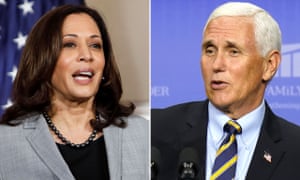 After a week that put an exclamation mark on the recklessness of the Trump administration’s handling of the coronavirus crisis, vice-president Mike Pence is set to defend the White House on Wednesday night in his first and only televised debate with Democratic vice-presidential nominee Kamala Harris.

As head of the White House’s pandemic task force, Pence appeared to have his work cut out for him, with polls indicating that a majority of Americans have lost faith in Donald Trump’s ability to confront and control the virus, and blame the US government for mishandling it.

To counter that view, Pence will have to explain how the virus was allowed to tear through the White House, Congress and Republican donor circles last week, hospitalizing the president and exposing a mounting number of staff, Secret Service and military personnel to Covid-19.

Pence was among those deepest inside the infection zone – though his office says that he and his wife, Karen Pence, remain virus-free.

Perhaps most daunting of all, for Pence: he will have to make his case against Harris, who has made a name for sharp cross-examinations in public settings of powerful men, from attorney general William Barr to supreme court justice Brett Kavanaugh.

“It’s going to be a tough night for Mike Pence,” said Karthik Ganapathy, a progressive political strategist with MVMT communications. “In so many ways, this outbreak is such a metaphor for the Trump administration’s handling of the virus writ large.

“And Mike Pence is going to be in the position of having to defend that from Senator Harris, who I think is going to make a pretty clear, thoughtful case that what we’ve seen out of the White House in the past week illustrates, in so many ways, the need for a different sort of leadership.”

In a historic benchmark, Harris, the former attorney general of California, will take the stage as the first woman of color ever on a major-party presidential ticket. Her main challenge, political analysts say, will be to keep the event focused on Pence and the failings of the Trump administration, and not do anything to rattle the apparently strong lead that she and Democratic presidential nominee Joe Biden enjoy in the race.

With Trump, 74, convalescing in the White House after testing positive for coronavirus, and Democrats anxious to protect the health of Biden, 77, who debated Trump just one week ago, the elephant on the stage will be the fact that either Pence or Harris might foreseeably ascend to the presidency in the next four years.

The debate “will be the most important of its kind since VP debates began 40 years ago,” wrote John Hudak, deputy director of the center for effective public management at the Brookings Institution. “Americans will be watching the VP debate with renewed awareness that one of those two individuals could easily become president – not because they ran for the office but because they succeeded to the office.”

In a nod to the extraordinary health precautions the event demands – and in a potential preview of the clash to play out onstage – the two sides traded fire before the event about appropriate safety measures.

The Biden/Harris camp demanded more space between the candidates and a shield separating them. A Pence spokesperson scoffed that, “if Senator Harris wants to use a fortress around herself, have at it”.

Workers install plexiglass panels between the candidates’ desks for the 2020 vice-presidential debate.

Guidelines issued by the Centers for Disease Control and Prevention (CDC) would not recommend that the candidates be separated by a shield, but instead that Pence, who in the past week has spent significant time in close quarters with known Covid-19 cases, not appear at all, placing himself in quarantine for two weeks.

A letter released on Tuesday by a Pence doctor, Jesse Schönau, ignored that advice.

“Vice-president Mike Pence is not in close contact with any individuals who have tested positive for Covid-19,” the letter said, eliding the question of who Pence was in contact with in the recent past.

A group of female Democratic leaders raised an outcry over what they said was the Trump administration’s carelessness about the virus, demanding that Pence provide confirmation of a negative coronavirus test, after Trump last week skipped his own pre-debate coronavirus test.

The debate commission announced a plexiglass shield would separate the candidates, and anyone not wearing a mask would be escorted from the hall.

A former adviser to Barack Obama, Tommy Vietor, had simple advice for Harris. “Don’t do it!” Vietor said on his podcast Monday. “Mike Pence isn’t safe. Mike Pence could come down with Covid tomorrow. It’s madness to me. Madness. I would not be doing the debate this week.”

The debate is scheduled take place at the University of Utah in Salt Lake City, at 9pm ET and moderated by Susan Page, Washington Bureau chief of USA Today. The university has implemented a lottery system to invite fewer than 100 students as guests, who will sit in the hall at distance from one another and wearing masks.

While Pence’s 2016 debate outing against Hillary Clinton running mate Tim Kaine is mostly forgotten, there is a chance for fireworks in his confrontation with Harris.

Harris, a former prosecutor, has a reputation as a member of the Senate judiciary committee for methodical and ominous questioning of hostile witnesses, including attorney general Barr, whom Harris pressed last year about his pursuing politically motivated investigations.

“Has the president or anyone at the White House ever asked or suggested that you open an investigation of anyone?” Harris asked, as Barr fumbled. “It seems you’d remember something like that.”

While the coronavirus pandemic has dominated the political dialogue in the closing weeks of the campaign, Harris could also box in Pence over the Trump administration’s stance on the climate emergency, racial justice and criminal justice, Ganapathy said.

“I hope that senator Harris doesn’t fall into the trap of arguing about who’s better at providing law and order,” he said.

“It’s a trap set by a campaign that wants to send racist dog whistles.”