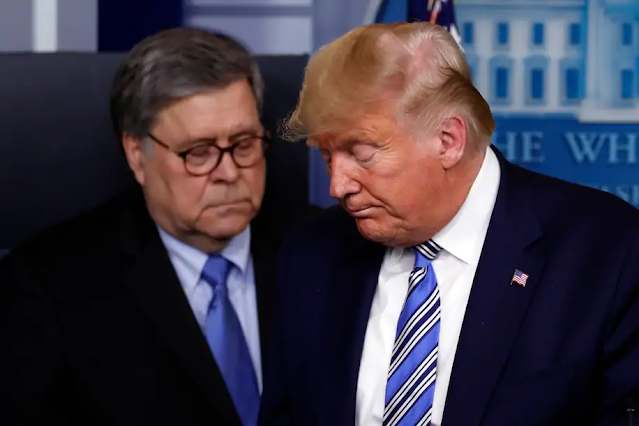 "President Trump is joined at a White House news conference by Attorney General William P. Barr.
Twenty former U.S. attorneys — all of them Republicans — on Tuesday publicly called President Trump “a threat to the rule of law in our country,” and urged that he be replaced in November with his Democratic opponent, former vice president Joe Biden.
“The President has clearly conveyed that he expects his Justice Department appointees and prosecutors to serve his personal and political interests,” said the former prosecutors in an open letter. They accused Trump of taking “action against those who have stood up for the interests of justice.”
The letter, signed by prosecutors appointed by every GOP president from Eisenhower to Trump, is the latest instance of Republicans backing Biden. In August, dozens of GOP national security experts signed a full-page newspaper ad endorsing Biden over Trump.
“He has politicized the Justice Department, dictating its priorities along political lines and breaking down the barrier that prior administrations had maintained between political and prosecutorial decision-making,” their letter says.
The effort was organized initially by Ken Wainstein, a former U.S. attorney for Washington, D.C., who later served during the George W. Bush administration as assistant attorney general for national security.
Read the letter from Republican former U.S. attorneys
A spokesman for the Trump campaign dismissed the letter from the former prosecutors as arrogant and offensive, noting that it is Trump who has the support of police officers and their unions.
“No one should be surprised establishment elitists are supporting Joe Biden,” Hogan Gidley said. In an emailed statement, he noted that the signers did not speak out “when Joe Biden promised to redirect funds away from police. I noticed their worry for politics wasn’t voiced when Joe Biden’s DOJ claimed to be a ‘wingman’ for the Administration, and I must have missed their unease for disunity when Biden refused to condemn his supporters for burning down churches, destroying businesses, and physically assaulting innocent Americans in the streets.”
The letter is signed by former U.S. attorneys from Florida, Minnesota, Arizona, New Mexico, Texas and other states. One of the signers, Gregory Brower, a former U.S. attorney for Nevada, also served during the first years of the Trump administration as the FBI’s assistant director for congressional affairs.
“I had an up-close view of how the President and the White House dealt with the Justice Department in recent years,” he said in an interview. “It’s clear that President Trump views the Justice Department and the FBI as his own personal law firm and investigative agency,” Brower said. “He made that clear privately — and publicly.”
Brower and Wainstein said Trump has soiled the department’s prized attributes: independence and a commitment to equal justice under the law.
In criticizing the Trump Justice Department publicly, the signers effectively joined half a dozen or so career prosecutors who publicly protested what they have decried as politicized decision-making, including reducing a recommended prison sentence for Trump campaign adviser Roger Stone and seeking to dismiss the case against Trump’s first national security adviser, Michael Flynn.
“Although we were political appointees, it was expected that politics would play no role in the exercise of our prosecutorial discretion and that we would make decisions according to the facts and law and without regard to their political implications,” the letter says, adding that: “as the chief federal law enforcement officials in our districts, we were expected to work closely with state and local officials of all political affiliations.”
Trump, on the other hand, has “undermined the Department’s ability to unify and lead our nation’s law enforcement by picking political fights with state and local officials in a naked effort to demonize and blame them for the disturbances in our cities over the past several months,” the letter says.
A former two-time U.S. attorney in Minnesota, Tom Heffelfinger, a Republican fixture in the state, said that a series of actions led him to sign the letter, including the president’s treatment of women, his personal and political demands of the Justice Department, and his handling of the aftermath of George Floyd’s death while in Minneapolis police custody.
“He bad-mouthed the mayor, the governor, leaders who were trying to get things under control,” Heffelfinger said. “Trump was interfering, demoralizing local officials and dividing the country.”
This fall, the accumulated weight of the president’s conduct led Heffelfinger to decide to sign the letter circulated by Wainstein and speak out publicly.
“I can’t look at myself in the mirror, I can’t look my daughters in the face if I can’t do what I can to get rid of him,” said Heffelfinger.
If Biden wins, Brower said the Justice Department could see a quick recovery in morale and sense of purpose, but it will take longer to recover confidence from American citizens and U.S. allies overseas.
Wainstein said U.S. allies are unnerved by the administration’s decision to release previously classified information to Republican lawmakers about sources who provided information about Russia’s interference in the 2016 election.
“It has caught the attention of foreign partners in a way that makes them ask whether they can trust us going forward,” Wainstein said. Restoring confidence in those relationships, he said, may be Biden’s greatest early test if he is elected."
GOP former prosecutors blast Trump, endorse Biden - The Washington Post
Posted by John H Armwood II at 3:09 PM