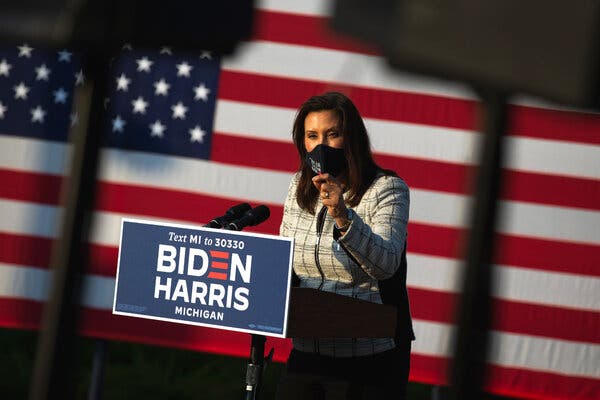 "Six men were arrested and accused of plotting with a militia group to kidnap Gov. Gretchen Whitmer of Michigan, the authorities announced on Thursday.


The men, who the F.B.I. said espoused anti-government views, had talked about taking Ms. Whitmer, a Democrat, hostage since at least the summer, according to a criminal complaint filed in federal court and unsealed on Thursday.
They had surveilled Ms. Whitmer’s vacation home in August and September, and they indicated that they wanted to take her hostage before the presidential election in November, Richard J. Trask II, an F.B.I. special agent, said in the criminal complaint. He said the F.B.I. believed the men were planning to buy explosives this week for their attempt.
Several of the men had talked about creating a society in which they could be “self-sufficient” and one said he wanted 200 men to storm the Statehouse in Lansing, Mich, the complaint said..."