Memphis poll worker fired for reportedly challenging voter wearing BLM shirt - The Washington Post. This is America, as it was, is now and probably will ever be. Racism in America is permanent. 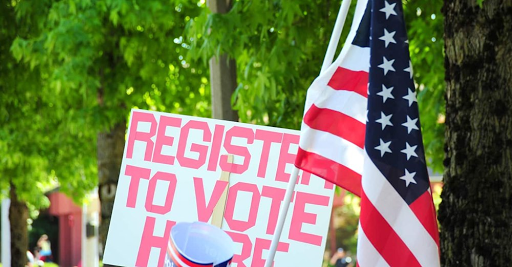 Tennessee voters were challenged at the polls for wearing Black Lives Matter and ‘I Can’t Breathe’ shirts,
By Kim Bellware
Oct. 20, 2020 at 10:38 p.m. EDT
A poll worker in Memphis was fired last week after interfering with early voters who wore T-shirts and masks with slogans supporting Black Lives Matter, according to a Shelby County election official.
Details about the incident remained unclear Tuesday, including how many people were affected. Earlier reports indicated voters had been turned away at the Dave Wells Community Center in north Memphis last week, but no county election board officials were on hand to verify whether the prospective voters ended up casting their ballots, Shelby County Election Commission spokeswoman Suzanne Thompson told The Washington Post on Tuesday.
“Our voters are not going to be intimidated. We’re doing everything we can so that every voter in Shelby County can exercise their right,” Thompson said.
The poll worker “of his own volition” was seen telling people late last week that they had to turn their T-shirt or mask inside out if it said “Black Lives Matter,” according to Thompson. A separate poll worker who worked the check-in table and was believed to be friends with the fired poll worker did not show up for work the next day, Thompson said.
AD
The incident occurred as Tennessee residents across the state have set records for early voting since the polls opened last Wednesday. In Shelby County, at least 132,000 people have cast early ballots as of Tuesday — nearly double the number of the first five days of early voting in 2016, according to data from the Tennessee secretary of state.
The U.S. has already hit 71% of total 2016 early voting
Thompson said county officials learned of the incident after a witness reported it to the election commission.
When county officials reminded the poll worker, who has not been identified, of the training that all poll workers undergo — and which this year specifically addressed that racial justice slogans are permitted at the polls — he pushed back, Thompson said. She described the poll worker as expressing his belief that Black Lives Matter and the slogan “I Can’t Breathe” were “political statements connected to the Democratic Party.”
AD
The issue garnered more attention after Antonio Parkinson, a Democratic member of the Tennessee legislature, referred to the incident on his Facebook page and praised the Shelby County Election Commission for firing the poll worker.
Electioneering, or engaging in activity that supports a particular candidate or party, is broadly prohibited at the polls, though specific rules about what voters can say, wear or display as they cast their ballots vary by state.
Tennessee’s electioneering laws bar campaign materials that support a specific political party or any candidate or position that appears on the ballot. Election officials in Shelby County had previously discussed slogans as part of the county’s broader plan to counteract any potential voter intimidation or voter suppression, Thompson said.
AD
Black Lives Matter is permissible, as it does not reflect a specific party or candidate, but a person wearing a “Make America Great Again” shirt would have to cover it up before voting since the slogan is known to be connected directly to a candidate who appears on the November ballot, Thompson said.
Tennessee adopts new law that could strip some protesters of voting rights
Kristen Clarke, the president of the National Lawyers’ Committee for Civil Rights Under Law, praised the county’s swift action in firing the poll worker and called his actions a form of voter suppression.
“It was targeting a voter who merely opposed racial injustice,” Clarke told The Post. “It’s something to keep an eye on given the racially charged moment we’re in.”
Clarke echoed Thompson’s explanation of Tennessee’s electioneering laws, noting that voters are still free to express personal views when they vote as long as they do not pertain to individuals or questions on the ballot.
AD
“People are free to wear T-shirts saying ‘Stay in school’ or ‘Smoking is bad for your health.’ There can be a range of messages. And there’s nothing in Tennessee law that would ban a voter from communicating support for racial justice,” she said.
The highly polarized political climate and a high-stakes election have put both Republicans and Democrats on alert over election integrity. Thompson said that last week’s incident in Memphis was the first of which she was aware. A spokeswoman with the American Civil Liberties Union of Tennessee said the group is monitoring closely for election interference but have not received complaints like the incident in Memphis.
Updated October 20, 2020
Election 2020: What to know
Follow live updates on the election here.
In the latest Washington Post-ABC News poll, Democratic nominee Joe Biden leads President Trump, with 54 percent of likely voters favoring him vs. 42 percent for Trump.
How to vote: Find out the rules in your state. Some states have already started sending out mail ballots; see how to make sure yours counts. Here’s how many people have already voted. Absentee and mail ballots are two terms for the same thing, mostly used interchangeably. Are you running into voting problems? Let us know.
Wondering if that thing you saw about voting is true? Check out news, analysis and fact checking about allegations involving the voting process here.
Electoral college map: Who actually votes, and who do they vote for? Explore how shifts in turnout and voting patterns for key demographic groups could affect the presidential race.
Policy: Where Biden and Trump stand on key issues defining the election.
Battlegrounds: These are the 50 political states of America. Dive into Michigan, Wisconsin, North Carolina, Florida, Pennsylvania, Minnesota, Arizona, Georgia, Texas and Ohio, and sign up for The Trailer and get more states, plus more news and insight from the trail, in your inbox three days a week."
Memphis poll worker fired for reportedly challenging voter wearing BLM shirt - The Washington Post
Posted by John H Armwood II at 8:12 AM