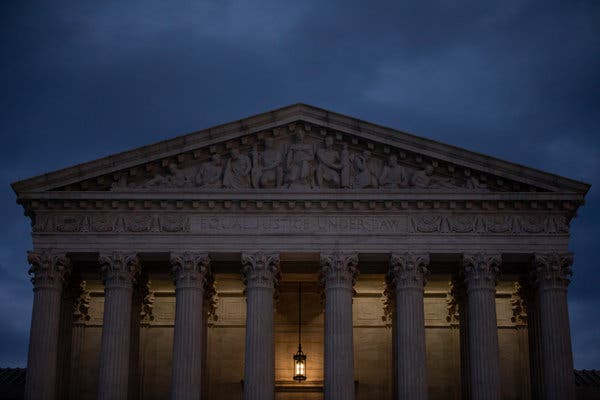 "How the justices rule on three cases involving Trump’s financial records will tell us all we need to know about the court.

When the first two of President Trump’s appeals seeking to shield his financial records from disclosure reached the Supreme Court last month, I predicted that the justices would take their institutional interests into account and turn the cases down.

And on reflection, now that the court has agreed to hear those two appeals plus a third, I’m glad I was wrong. Here’s why: The eventual decisions, to come in the months after the as-yet unscheduled arguments in late March or early April, will give the country much-needed clarity about the Supreme Court. With the court in the full glare of an election-year spotlight, we will learn beyond any doubt what kind of Supreme Court we have — and whether its evolution into partnership with a president who acts as if he owns it is now complete.

Those of us who have been warning about this evolution are well aware that it’s a contested claim, subject to ready dismissal as overstatement or ideologically driven fearmongering. So I want to make the case here that for the justices to do anything other than affirm the three decisions at issue by two Courts of Appeals would be to vindicate both the warnings and the president’s disturbing assumption.

The fact is that these cases are not what the president’s lawyers have dressed them up to be. This is not Congress or the federal courts putting the president in the dock. No, that was United States v. Nixon, the Watergate tapes case, in which the court under a conservative chief justice, Warren Burger, who had been named to the court by Mr. Nixon, unanimously rejected the president’s claim of privilege against releasing records of intimate Oval Office conversations for use by a special prosecutor in a criminal trial.

Nor is this a sitting president being distracted and demeaned by having to testify in person as a defendant in a lawsuit about his personal behavior. No, that was Clinton v. Jones, in which the court under another conservative chief justice, William Rehnquist, unanimously rejected President Bill Clinton’s claim of privilege.

In none of the three cases now before the court would the president, if he lost, have to lift a finger. He is a plaintiff, not a defendant. In his capacity as a private citizen, he brought the three lawsuits to quash subpoenas issued by three House of Representative committees and the Manhattan district attorney, not to him but to two banks and an accounting firm, for his personal and corporate financial records.

In fact, in one of the two New York cases, Trump v. Deutsche Bank, Judge Jon O. Newman of the United States Court of Appeals for the Second Circuit, noting that the complaint filed by the president’s lawyers stated that “President Trump brings this suit solely in his capacity as a private citizen,” referred throughout his 106-page opinion to the “Lead Plaintiff” rather than President Trump.

“Although the challenged subpoenas seek financial records of the person who is the president,” Judge Newman wrote, “no documents are sought reflecting any actions taken by Donald J. Trump acting in his official capacity as president.”

Judge David Tatel, writing for the United States Court of Appeals for the District of Columbia Circuit in Trump v. Mazars USA, in which the House Oversight Committee is seeking records from an accounting firm, noted that for six of the eight years covered by the subpoena, President Trump was “merely Mr. Trump or candidate Trump.”

“It is far from obvious that President Trump, proceeding in his individual capacity, carries the mantle of the Office of the President in this case,” Judge Tatel wrote. He added that the House committee’s request “implicates no material subject to a recognized legal privilege or an asserted property interest.”

Indeed, while asserting what his lawyers call “temporary absolute president immunity,” President Trump is not raising a claim of executive privilege in any of the cases. That’s not to say his argument is not a far-reaching one. The “question presented” in Trump v. Vance, the case in which he is seeking to quash the Manhattan District Attorney Cyrus Vance’s subpoena to the Mazars accounting firm, shows how the president is reaching for the moon in a case that Chief Judge Robert Katzmann of the Second Circuit anchored solidly to the ground, as explained below.

As Supreme Court practitioners know, the “question presented,” which appears by itself on the first page of any Supreme Court petition, is perhaps the most important part of the petition. It sets the tone, frames the argument and contains the first words the justices and their law clerks will read.

By contrast — a contrast as extreme as any I can recall — this is how the district attorney presents the question in his brief opposing Supreme Court review: “Whether presidential immunity bars the enforcement of a state grand jury subpoena directing a third party to produce material which pertains to the president’s unofficial and nonprivileged conduct.”

That careful framing, rather than the president’s, reflects what Chief Judge Katzmann actually wrote:

“We have no occasion to decide today the precise contours and limitations of presidential immunity from prosecution, and we express no opinion on the applicability of any such immunity under circumstances not presented here. Instead, after reviewing historical and legal precedent, we conclude only that presidential immunity does not bar the enforcement of a state grand jury subpoena directing a third party to produce nonprivileged material, even when the subject matter under investigation pertains to the president.”

And this is the opinion that the president’s Supreme Court petition calls “irreconcilable with our constitutional design.”

I’ve quoted from each of the three opinions for a reason: As the weeks go by, the country will be subjected to gaslighting from the White House so intense that it won’t be easy even for those who have actually read the full opinions to hold on to the knowledge of how carefully circumscribed they are. The president’s petitions are just the opening salvo in a battle for the justices’ votes, of course, but also for the public’s understanding of both how little and how much is at stake. (A taste of things to come is this hyperbolic sentence from the president’s petition in the D.C. Circuit’s Mazars case: “At its core, this controversy is about whether — and to what degree — Congress can exercise dominion and control over the Office of the President.”)

Needless to say, President Trump is not the author of the Supreme Court petitions filed by his team of private lawyers. But any doubt that he thinks of the court as his friend was erased by his tweet this month as the House moved toward impeachment. “Shouldn’t even be allowed,” he tweeted. “Can we go to Supreme Court to stop?”

I’m writing this column from Jerusalem, where I participated in a conference at the Israel Academy of Sciences and Humanities on the timely subject of “The Challenges of Liberal Democracy.”

I was gripped by a talk by Moshe Halbertal, a distinguished Israeli philosopher, and professor at Hebrew University and New York University, who identified one of the pillars of democracy as the willingness of contending sides to accept political defeat without violence, verbal as well as physical. The end of the conference on Tuesday coincided with President Trump’s unhinged letter to Speaker Nancy Pelosi, accusing the House of Representatives of engaging in a “charade,” an “unconstitutional abuse of power,” an “attempted coup.”

The juxtaposition between what I heard from Professor Halbertal and what I read in the letter was eerie.

While I have been in Israel, students back home have been taking their fall-semester final exams. In their first semester, students at Yale Law School take their exams on a pass-fail basis. The Supreme Court, in these three cases due for decision in the waning months of Mr. Trump’s presidential term, faces a crucial exam of its own. We can’t afford for it to fail."