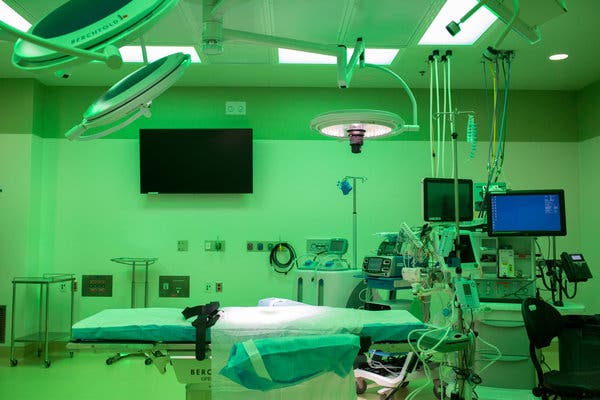 "Yes, transitioning to a more equitable system might eliminate some jobs. But the status quo is morally untenable.

Life expectancy continues to rise in other wealthy countries, but not in the United States, researchers just reported. Some of the blame for that can be attributed to our dysfunctional health care system.

Life expectancy continues to rise in other wealthy countries, but not in the United States, researchers just reported. Some of the blame for that can be attributed to our dysfunctional health care system.Christopher Capozziello for The New York Times

Won’t you spare a thought for America’s medical debt collectors? And while you’re at it, will you say a prayer for the nation’s health care billing managers? Let’s also consider the kindly, economically productive citizens in swing states whose job it is to jail pregnant women and the parents of cancer patients for failing to pay their radiology bills. Put yourself in the entrepreneurial shoes of the friendly hospital administrator who has found a lucrative new revenue stream: filing thousands of lawsuits to garnish sick people’s wages.

And who can forget the lawyers? And the lobbyists! Oh, aren’t they all having a ball in America’s health care thunderdome. Like the two lobbyists who were just caught drafting newspaper editorials for Democratic state representatives in Montana and Ohio, decrying their party’s push toward a “government-controlled” health care industry. It’s clear why these lobbyists might prefer the converse status quo: a government controlled by the health care industry. If we moved to a single-payer system, how would lobbyists put food on the table, and who would write lawmakers’ op-ed essays?

Welcome to the bizarre new argument against “Medicare for all”: It’s going to cost us jobs. Lots of jobs. Good, middle-class, white-collar jobs in America’s heartland, where Democrats need to win big to defeat Donald Trump.

The argument is specious and morally suspect. Last week, health researchers reported that American life expectancy is declining for the first time in half a century, and some of the leading causes have to do with the ruinous health care system. Even if it is the case that reforming American health care might eliminate some jobs, it would seem to be a good trade for the likely benefit: More people might gain access to affordable health care and get to keep living.

But I worry that the jobs argument might sway moderate politicians, centrist pundits and much of the establishment, because it plays on one of the major fault lines of health reform: that in fixing the system so that more people benefit, those who now enjoy a privileged slice of American health care might end up worse off than they are today.

As a matter of ethics and equality, this should be O.K.; sticking with a system that is the source of so much death, debt and financial ruin just because you like your doctor or your insurance company or your medical-billing job is not really a defensible position.

On the other hand, in America, “I’ve got mine and I don’t want to lose it” is always pretty good politics.

The jobs argument goes like this: There’s a lot of fat in the American health care industry, and any effort to transform it into a simpler system in which everyone is covered would necessarily eliminate layers of bureaucracy and likely reduce overhead costs. Every year Americans collectively pay about $500 billion in administrative costs for health care — that is, for things like billing and insurance overhead, not for actual medical care.

These costs are significantly higher than in most other wealthy countries. One study on health care data from 1999 showed that each American paid about $1,059 per year just in overhead costs for health care; in Canada, the per capita cost was $307. Those figures are likely much higher today.

Ah, but there’s the rub: All this overspending creates a lot of employment — and moving toward a more efficient and equitable health care system will inevitably mean getting rid of many administrative jobs. One study suggests that about 1.8 million jobs would be rendered unnecessary if America adopted a public health care financing system.

So what if some of these jobs involve debt collection, claims denial, aggressive legal action or are otherwise punitive, cruel or simply morally indefensible in a society that can clearly afford to provide high-quality health care to everyone? Jobs are jobs, folks, as Joe Biden might say.

Indeed, that’s exactly what Biden’s presidential campaign is saying about the Medicare for all plans that Senators Elizabeth Warren and Bernie Sanders are proposing: They “will not only cost 160 million Americans their private health coverage and force tax increases on the middle class, but it would also kill almost two million jobs,” a Biden campaign official warned recently.

Note the word “kill” in the statement. That word might better describe not what could happen to jobs under Medicare for all but what the health care industry is doing to many Americans today.

Last week, the medical journal JAMA published a comprehensive study examining the cause of a remarkably grim statistic about our national well-being. From 1959 to 2010, life expectancy in the United States and in other wealthy countries around the world climbed. Then, in 2014, American life expectancy began to fall, while it continued to rise elsewhere.

What caused the American decline? Researchers identified a number of potential factors, including tobacco use, obesity and psychological stress, but two of the leading causes can be pinned directly on the peculiarities and dysfunctions of American health care.

The first is the opioid epidemic, whose rise can be traced to the release, in 1996, of the prescription pain drug OxyContin. In the public narrative, much of the blame for the epidemic has been cast on the Sackler family, whose firm, Purdue Pharma, created OxyContin and pushed for its widespread use. But research has shown that the Sacklers exploited aberrant incentives in American health care.

Purdue courted doctors, patient groups and insurers to convince the medical establishment that OxyContin was a novel type of opioid that was less addictive and less prone to abuse. The company had little scientific evidence to make that claim, but much of the health care industry bought into it, and OxyContin prescriptions soared. The rush to prescribe opioids was fueled by business incentives created by the health care industry — for Purdue, for many doctors and for insurance companies, treating widespread conditions like back pain with pills rather than physical therapy was simply better for the bottom line.

Opioid addiction isn’t the only factor contributing to rising American mortality rates. The problem is more pervasive, having to do with an overall lack of quality health care. The JAMA report points out that death rates have climbed most for middle-age adults, who — unlike retirees and many children — are not usually covered by government-run health care services and thus have less access to affordable health care.

The researchers write that “countries with higher life expectancy outperform the United States in providing universal access to health care” and in “removing costs as a barrier to care.” In America, by contrast, cost is a key barrier. A study published last year in The American Journal of Medicine found that of the nearly 10 million Americans given diagnoses of cancer between 2000 and 2012, 42 percent were forced to drain all of their assets in order to pay for care.

The politics of Medicare for all are perilous. Understandably so: If you’re one of the millions of Americans who loves your doctor and your insurance company, or who works in the health care field, I can see why you would be fearful of wholesale change.

But it’s wise to remember that it’s not just your own health and happiness that counts. The health care industry is failing much of the country. Many of your fellow citizens are literally dying early because of its failures. “I got mine!” is not a good enough argument to maintain the dismal status quo."