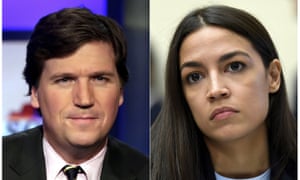 "Thank you, Alexandria for saying what too many mainstream Democrats negligently fail yo do.

The comments came following a segment on Carlson’s show in which he and his guest, City Journal editor Seth Barron, commented on footage of an unremarkable amount of trash on the streets of Ocasio-Cortez’s New York City district and blamed it on immigrants, whom Barron said had “occupied” the district and made it “one of the least American districts in the country”.

Carlson asked: “How can we take seriously anything she says about the environment when this is her congressional district? She should be ashamed of this.”

Using racist and xenophobic tropes, Barron responded that “her district is actually one of the least American districts in the country, and by that, I don’t mean that it’s not part of America, but it’s occupied by relatively few American citizens.”

He went on: “The way they inhabit housing there is such that they live in a lot of illegal spaces like basements, and many people live there, so they wind up producing a lot of garbage that the landlords don’t want thrown out normally. Hence, you wind up with a lot of garbage on the streets. You have illegal food vendors pouring their pig grease in the gutters.”

It was unclear where he was getting this information from.

Carlson and his guests, much like the president, frequently imply that immigrants are making the country “poorer and dirtier”.

Carlson has called the idea of white supremacy in America a hoax.

On Wednesday night on Twitter, Ocasio-Cortez shared video of the segment and wrote: “I go back and forth on whether to go on Fox News.”

She said: “The main reason I haven’t is squaring the fact that the ad revenue from it bankrolls a white supremacist sympathizer to broadcast an hour-long production of unmitigated racism, without any accountability whatsoever.”

She added: “‘Immigrants are dirty’ is a lazy, tired, racist trope.”

Barron later apologized on Twitter, saying he had not done “justice to a complicated issue” of crowded housing conditions."