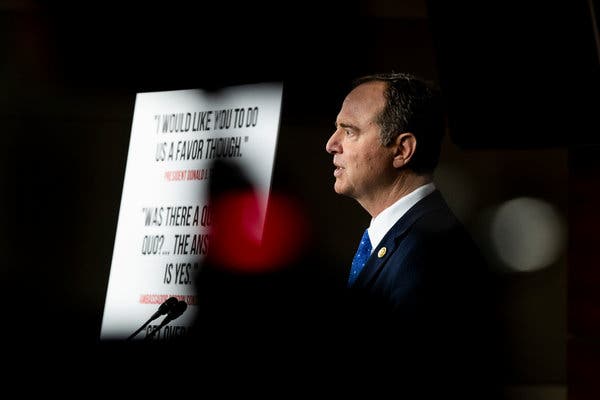 "Like Nixon, Trump is accused of many things. But only one matters.

The summer of 1998 was not an auspicious time for me to start work as a young White House lawyer. I was in the Office of Legislative Affairs — but all legislative work had ground to a halt with President Bill Clinton facing impeachment in the House. Instead, we compiled a daily catalog of statements by members of Congress about Mr. Clinton’s actions and their possible consequences.

While it wasn’t a great way to start a career, that experience offered an accidental insight into the current impeachment process — and a warning about overreach by the Democrats.

Back in 1998, House Republicans put together a fairly straightforward case against the president: Mr. Clinton was accused of having an affair with a White House intern, Monica Lewinsky, and then lying about it. The Republicans took full advantage of this simple story to advance their claim that a president of questionable morals should not remain in office. The statements we tracked divided into easy categories; some members thought the affair was enough to sink the president, while others thought the lying was the impeachable offense.

President Trump’s White House no doubt has a similar operation. But while our job was simple because the narrative of Mr. Clinton’s sins was easy to grasp, today’s allegations are all over the map and could amount to a lengthy list of articles of impeachment.

Unfortunately for House Democrats, the complexity of this story does not help their cause. Mr. Trump has destroyed so many norms, has been credibly accused of breaking so many laws and has otherwise engaged in such a dizzying array of possibly impeachable behaviors that any intelligible story line has been blurred, if not obliterated. The enormity of his alleged transgressions works, perversely, to his advantage.

Right now Democrats are debating whether to focus articles of impeachment solely on the Ukraine scandal, or to add multiple other charges, ranging from obstruction of justice and other illegal or unethical actions detailed in the Mueller report, to personal enrichment in violation of the Constitution’s emoluments clause. The latter, however satisfying, would be a mistake.

Even though it means leaving out actions many members believe independently merit removing this president from office, which would frustrate many, there may be virtue in keeping the focus narrow at least in how they talk about the case against Mr. Trump.

The impeachment case of Richard Nixon offers a fruitful example. There are many obvious parallels between Mr. Trump and Nixon, including their venal behavior, demonization of the news media and the fact that both investigations have included evidence of break-ins into the Democratic National Committee headquarters. Both presidents also sought to persuade a foreign power to interfere in our elections — Mr. Trump with Ukraine and Nixon with South Vietnam.

The list goes on, and yet the impeachment case against Nixon was founded on a simple, straightforward story: his role in the cover-up of the 1972 break-in at the Democratic National Committee headquarters at the Watergate office complex in Washington.

What made the public sit up and take notice was the release, on Aug. 5, 1974, of a transcript of the so-called Smoking Gun Tape, which made it impossible for Nixon to argue that he was unaware of and uninvolved in the cover-up. The president’s support in Congress crumbled. Representative John Jacob Rhodes, a Republican Nixon loyalist who served as the minority leader in the House, stated it most directly: “Cover-up of criminal activity and misuse of federal agencies can neither be condoned nor tolerated.”

Donald Trump is the master of diversionary tactics. Every day through tweets and press statements, he spreads falsehoods, attacks his opponents on made-up grounds and sometimes even gives congressional committees new avenues of illegality to follow for impeachment or prosecution. Each of these new story lines must be ignored. The best story line is the simple one: Mr. Trump tried to bribe a foreign official with American government dollars to announce an investigation of unfounded charges against a domestic political rival. There is more, much more. But that’s enough."