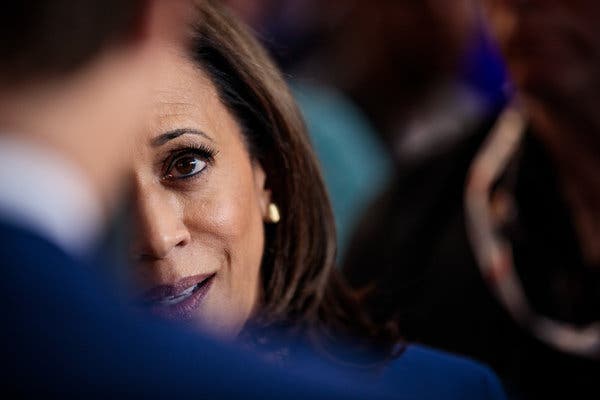 "It is worth exploring the election system in this country and who benefits from it.

Kamala Harris entered the presidential race with a bang.

She announced her candidacy on Martin Luther King Day and not only raised $1.5 million in its first 24 hours, according to Politico, but also “in the first 12 hours made $110,000 in revenue from its online merchandise store that sells T-shirts, hats and tote bags — breaking the single-day, single-candidate record for sales by the vendor, Bumperactive.”

Her campaign material used similar colors and typography as did Shirley Chisholm, the first black woman elected to Congress and the first to see a major party nomination for the presidency.

Soon after her announcement, FiveThirtyEight published a story under the headline, “How Kamala Harris Could Win The 2020 Democratic Nomination,” with a linked analysis by the site’s Nate Silver, who built a model of each contender’s “ability to build a coalition among key constituencies within the party” and wrote that “the coalition-building model has made me more skeptical about the chances for Bernie Sanders, Joe Biden and Amy Klobuchar, for instance, but more bullish about Kamala Harris, Beto O’Rourke and Cory Booker.”

About a week after her announcement, Harris held her kickoff rally outside the Oakland City Hall, and 20,000 people showed up and packed the plaza.

David Leonhardt helps you make sense of the news — and offers reading suggestions from around the web — with commentary every weekday morning.

Harris’s campaign was ablaze with potential and possibility.

Now, less than a year later, Harris has suspended her campaign. And, the inevitable autopsy articles are flying, attempting to diagnose what went wrong, or what her campaign did wrong.

But, it seems to me that the questions here are bigger than missteps, real or perceived. Every campaign has missteps. It is hard to look at this field of candidates and not remember a cascading list of missteps. And many of them have things in their past for which they have apologized. But one question is why missteps are fatal to some campaigns and not others.

It is fair to ask what role racism and sexism played in her campaign’s demise. These are two “isms” that are permanent, obvious and unavoidable in American society.

It is fair to ask how those features impacted media coverage, or the lack of coverage.

It is fair to ask about the Democratic debate rules and how they prioritize donations in addition to polls, thereby advantaging the opinions of people who can afford to give over those who can’t.

It is fair to ask about the Democrats’ schedule of caucuses and primaries that begin with two states — Iowa and New Hampshire — that are overwhelmingly white, so that candidates who poll best there get the benefit of momentum even before a ballot is cast and also before the contests move to states with more minorities.

It is fair to ask why, as of now, only white candidates have qualified for the next debate, even though the field began as one of the most diverse.

All of this must be explored and discussed and learned from.

But there is something else that we learn — or relearn — from Harris’s run: the enduring practicality of black voters. They, in general, reward familiarity, fealty and feasibility.

Joe Biden just fits that bill for the plurality of black voters. When it comes to picking a nominee, black people don’t adhere to racial tribalism, broadly speaking. They want their votes to matter; they want to pick a winner.

It is possible for these black voters to be exceedingly proud of the presence of candidates like Harris and Booker while simultaneously supporting another candidate as their first choice.

It is possible to feel a profound sadness that Harris would have to leave the race before Iowa and simultaneously believe that other candidates were likely to win the early contests.

This practicality has repeatedly been on display in presidential politics. In 2008, Hillary Clinton held a 24-point lead among black Democrats over Barack Obama before Iowa, but after Obama won the state he held a 28-point lead over Clinton among black voters. He had proven his viability. Harris will never get that chance.

If Harris had Biden’s level of support in the polls among black voters she would still be in the race. But, they chose a different course, in part because the system increasingly appears stacked against her, making her candidacy look more and more like a long shot.

But also, white people made a different choice. Everyone seems to have settled, for whatever reason, on the notion that a white person has the best chance of beating Trump, that a racial minority is too risky this time around.

There is absolutely no reason Harris should be out this race so early.

You can blame her exit on her past and her execution of her campaign, sure, but if you do so without examining the system the Democrats have built and the way that even black people feel that it’s stacked against the black candidates, you are not being honest."

Opinion | What Kamala Harris’s Campaign Teaches Us - The New York Times
Posted by John H Armwood II at 9:31 AM