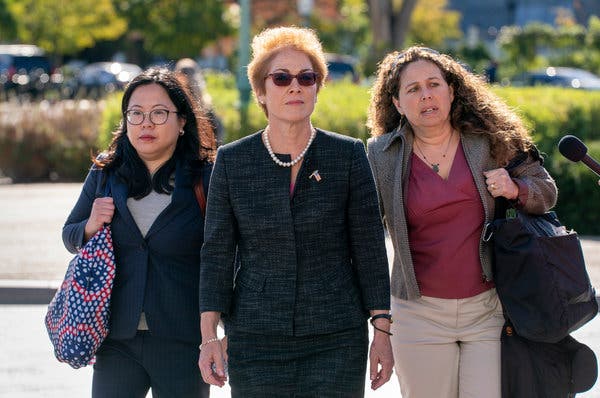 "WASHINGTON — Marie L. Yovanovitch, who was recalled as the American ambassador to Ukraine in May, testified to impeachment investigators on Friday that a top State Department official told her that President Trump had pushed for her removal for months even though the department believed she had “done nothing wrong.”

In a closed-door deposition that could further fuel calls for Mr. Trump’s impeachment, Ms. Yovanovitch delivered a scathing indictment of how his administration conducts foreign policy. She warned that private influence and personal gain have usurped diplomats’ judgment, threatening to undermine the nation’s interests and drive talented professionals out of public service. And she said that diplomats no longer have confidence that their government “will have our backs and protect us if we come under attack from foreign interests.”

According to a copy of her opening statement obtained by The New York Times, Ms. Yovanovitch said she was “incredulous” that she was removed as ambassador “based, as far as I can tell, on unfounded and false claims by people with clearly questionable motives.”

Ms. Yovanovitch, a 33-year veteran of the foreign service and three-time ambassador, spoke to investigators on Capitol Hill even though the State Department had directed her not to late Thursday and in defiance of the White House’s declaration that administration officials would not cooperate with the House impeachment inquiry. Democrats leading the inquiry said that order amounted to obstruction of their inquiry and quietly issued a subpoena Thursday morning with the understanding that Ms. Yovanovitch would then cooperate.

Not long after, she arrived at the Capitol with a lawyer and entered the secure basement rooms of the House Intelligence Committee, where she was expected to take questions from congressional staff and lawmakers for much of the day.

Her searing account, delivered at the risk of losing her job, could lend new momentum to the impeachment inquiry that imperils Mr. Trump. The inquiry centers on the president’s attempts to use his power and the foreign policy apparatus to pressure Ukraine to investigate his political rivals, an endeavor in which Rudolph W. Giuliani, his personal lawyer, was a central player. The shadowy effort by Mr. Giuliani grew to drive the United States policy toward Ukraine, at times appearing to sideline the State Department in the process.

Ms. Yovanovitch said in her deposition that the undermining of loyal diplomats at the State Department would embolden “bad actors” who would “see how easy it is to use fiction and innuendo to manipulate our system” and serve the interests of adversaries of the United States, including Russia.

“Today we see the State Department attacked and hollowed out from within,” she said. She called upon the department’s leaders, as well as Congress, to defend it, saying “I fear that not doing so will harm our nation's interest, perhaps irreparably.”

And she spoke of her “deep disappointment and dismay” about the events that led to her removal, describing a sense of betrayal of the “sacred trust” she and other diplomats once had with their government.

Ms. Yovanovitch dismissed as “fictitious” the allegations that she had been disloyal to Mr. Trump, which were circulated by allies of Mr. Giuliani.

“I do not know Mr. Giuliani’s motives for attacking me,” she said, adding that people associated with him “may well have believed that their personal financial ambitions were stymied by our anti-corruption policy in Ukraine.”

The indictment charged that they were working for one or more unnamed Ukrainian officials who wanted her out of Kiev.

But she provided new details about her abrupt ouster just as Ukraine had elected a new president, when continuity in American policy was critical, she argued.

Less than two months after the State Department asked her to extend her tour as ambassador until 2020, she said, she was abruptly told in late April to return to Washington “on the next plane.”

She said that John Sullivan, the deputy secretary of state, told her later that she had “done nothing wrong and that this was not like other situations where he had recalled ambassadors for cause.” Other foreign diplomats say they know of no parallel to her case.

Mr. Sullivan told her that Mr. Trump had “lost confidence in me and no longer wished me to serve as his ambassador,” she said. “He added that there had been, a concerted campaign against me and the department had been under pressure from the president to remove me since the summer of 2018.”

That account contradicts what the State Department told reporters at the time, that Ms. Yovanovitch was merely completing her assignment “as planned.”

Even as she was being questioned behind closed doors on Friday, Mr. Trump nominated Mr. Sullivan to be the next ambassador to Russia. The timing appeared to be coincidental.

Ms. Yovanovitch said that she had never inhibited any legitimate efforts by Ukraine to combat corruption; instead, she tried to bolster them to help Ukraine combat Russia’s influence.

She was not involved in discussions about the suspension of $391 million in American security aid to Ukraine this summer; those took place only after she left Ukraine in May, she said.

She said she feared that the administration’s failure to back its diplomats would harm American interests, including Ukraine’s attempts to reform its government and defend against a hostile Russia.

“That harm will come not just through the inevitable and continuing resignation and loss of many of this nation’s most loyal and talented public servants,” she said, according to the prepared remarks.

“It also will come when those diplomats who soldier on and do their best to represent our nation face partners abroad who question whether the ambassador truly speaks for the president and can be counted upon as a reliable partner. The harm will come when private interests circumvent professional diplomats for their own gain, not the public good,” she said.

Ms. Yovanovitch said she had met Mr. Giuliani only a few times, and at least in her prepared remarks, offered no details about his efforts to freelance foreign policy in Ukraine and to press Ukraine to investigate the Bidens. Mr. Giuliani’s role is now at the center of the House’s impeachment inquiry into whether the president withheld military aid and a White House meeting in effort to gin up an foreign investigation that would damage the elder Mr. Biden, one of his foremost political rivals.

That Ms. Yovanovitch appeared at all was remarkable and raised the possibility that other government officials would follow suit in defiance of the administration’s orders. Caught between the conflicting and equally forceful demands of two branches of government, she chose Congress, raising the possibility that other government officials with little loyalty to Mr. Trump could follow suit

Three House committees conducting the investigation hope to tick through a roster of additional witness depositions next week, when lawmakers return to Washington from a two-week recess. Among them are Fiona Hill, who until this summer served as senior director for Europe at the National Security Council, and is scheduled to appear Monday; George Kent, a deputy assistant secretary of state and Ukraine expert, whose appearance is set for next Tuesday; and Gordon D. Sondland, the American ambassador to the European Union whose scheduled appearance on Tuesday was blocked by the State Department hours before he was to arrive on Capitol Hill.

Mr. Sondland has now agreed to comply with a House subpoena and testify on Thursday, despite the State Department’s instruction that he not appear, although he would not hand over documents unless the department did, his lawyer said on Friday.

"The White House or State Department could try to block those depositions, but like Ms. Yovanovitch and Mr. Sondland, each witness may make his or her own choice. Democrats leading the inquiry warned the Trump administration that attempts to stonewall their work could itself be impeachable conduct.

“Any efforts by Trump administration officials to prevent witness cooperation with the committees will be deemed obstruction of a coequal branch of government and an adverse inference may be drawn against the president on the underlying allegations of corruption and cover-up,” wrote the chairmen of the House Intelligence, Oversight and Reform and Foreign Affairs committees."