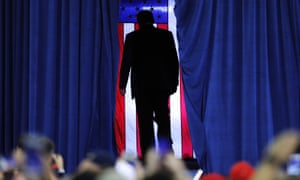 "The most xenophobic and isolationist American president in modern history has been selling America to foreign powers for his own personal benefit.

Trump withdrew American troops from the Syrian-Turkish border, leaving our Kurdish allies to be slaughtered and opening the way for a resurgent Islamic State. Trump’s rationale? He promised to bring our soldiers home.

There could be another reason. Trump never divested from his real estate business, and the Trump Towers Istanbul is the Trump Organization’s first and only office and residential building in Europe. Businesses linked to the Turkish government are also major patrons of the Trump Organization. Which may be why Trump has repeatedly sided with the Turkish strongman Recep Tayyip Erdoğan, who has been intent on eliminating the Kurds.

Back home, Trump has separated families at the border, locked migrant children in cages and tried to ban Muslims from entering the country. He says he wants to protect America’s borders.

Under Trump, thuggery has replaced diplomacy

But guarding America’s geographic borders isn’t nearly as important as guarding the integrity of American democracy, which Trump has repeatedly compromised for personal political gain. He did this on 25 July when he asked the president of Ukraine to do him a personal “favor” by digging up dirt on Joe Biden, his most likely 2020 opponent.

Trump justifies his trade war with China as protecting America from Chinese predation. But he asked China to start an investigation of Biden, and last week his adviser on China conceded he spoke with Chinese officials about the former vice-president.

During the 2016 election, Trump publicly called on Russia to find Hillary Clinton’s missing emails. Within hours, Russian agents sought to do just that by trying to break into her computer servers.

Now Trump is playing at being a double foreign agent – pushing the prime minister of Australia, among others, to gather information to discredit Mueller.

Rudy Giuliani is Trump’s international thug, arranging deals with foreign powers. On Wednesday, two of Giuliani’s business associates were arrested in connection with a criminal scheme to funnel foreign money to candidates for office, including donations to a Super Pac formed to support Trump.

Under Trump, thuggery has replaced diplomacy. On Friday, in an opening statement for congressional impeachment investigators, Marie Yovanovitch, former US ambassador to Ukraine, said people associated with Giuliani “may well have believed that their personal financial ambitions were stymied by our anti-corruption policy in Ukraine”.

Meanwhile, even as Trump spews conspiracy theories about the Biden family, his own children are openly profiting from foreign deals. Eric and Don Jr have projects in the works in Ireland, India, Indonesia, Uruguay, Turkey and the Philippines.

Trump is pocketing money from foreign governments eager to curry favor by staying at his hotels. The practice has become so routine that during Trump’s 25 July phone call, the Ukrainian president assured him that the “last time I traveled to the United States, I stayed in New York near Central Park and I stayed at the Trump Tower”.

According to a former Trump Organization official, foreign governments spent more than a million dollars at Trump businesses in 2018, mostly at the Trump International hotel in Washington. Trump will make even more money if he carries out his plan to host next year’s G7 meeting at his Doral golf resort, in Florida.

All of this is precisely what the founding fathers sought to prevent.

When they gathered in Philadelphia 232 years ago to write a constitution, a major goal was to protect the new nation from what Alexander Hamilton called the “desire in foreign powers to gain an improper ascendant in our councils”.

To ensure no president would “betray his trust to foreign powers”, as James Madison put it, they included an emoluments clause – barring a president from accepting foreign payments.

They also gave Congress the right to impeach a president for “treason, bribery, or other high crimes and misdemeanors”. During the Virginia ratifying convention, Edmund Randolph confirmed that a president “may be impeached” if discovered “receiving [help] from foreign powers”.

You don’t have to be an originalist to see the dangers to democracy when a president seeks or receives personal favors from foreign governments. There is no limit to how far a foreign power might go to help a president enlarge his political power and wealth, in exchange for selling out America.

Donald Trump is a xenophobe in public and international mobster in private. He has brazenly sought private gain from foreign governments at the expense of the American people.

This is shameful and criminal. At the very least, it is impeachable.

Robert Reich, a former US secretary."