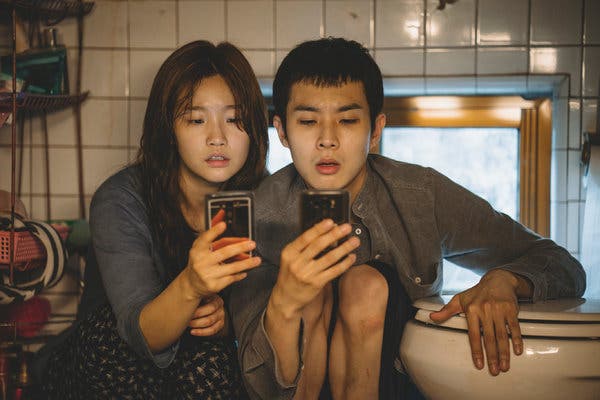 "The title of the scathing new South Korean film “Parasite” refers to the Kim family, destitute basement dwellers who try to climb the social ladder by leeching off the wealthy Park family. While the Kims worry about money, the extravagant Parks worry about poor people’s unpleasant smell.

The families’ lifestyles couldn’t be more different. The Kims’ tiny dining room window looks into a street that doubles as a urinal for drunks. The Parks’ giant panes have a view of their meticulously mowed lawn surrounded by manicured hedges. The Kims eat cheap pizza. The Parks’ favorite casual meal involves premium beef.

The movie is the latest South Korean film to pit the haves against the have-nots: see this year’s No. 1 movie there, “Extreme Job,” as well as recent titles like “Burning” and 2013’s “Snowpiercer.” It’s no coincidence that income inequality is a recurring theme in the nation’s cinema. Experts say the films, for the most part big hits at home, capture the essence of Korean sentiments at a time when the country’s income gap continues to widen.

Get recommendations on the best TV shows and films to stream and watch, delivered to your inbox.

While such inequality afflicts the United States and many other countries, South Korea’s income distribution is remarkably lopsided. In 2015, the top 10 percent of South Koreans held 66 percent of the nation’s wealth, while the poorer half of the population held only 2 percent, according to figures cited by Kyung Hyun Kim, a professor of East Asian studies at the University of California, Irvine, and an author of several books on Korean cinema. In addition, large numbers of South Korea’s elite inherited their wealth.

That inequity, combined with scandals involving corruption among the privileged, have bred so much bitterness and frustration among Koreans that new slang phrases have emerged in recent years, like “gold spoons” and “dirt spoons.”

“People who are born with a gold spoon are the ones who have made it,” the professor said. “The have-nots are dirt spoons. They will always be given a dirt spoon, and it will always be a struggle.”

The lack of social mobility for dirt spoons is at the heart of “Parasite,” directed by Bong Joon Ho. The Kims are each smart and talented in their own ways. Yet they are so poor — they crouch next to a toilet just to steal a neighbor’s Wi-Fi — that there is no clear path for them to succeed.

Though economically disadvantaged Americans face a similar plight, in South Korea, job prospects can be tied to family background, as when employers ask about applicants’ parents, a practice that could favor the privileged, Kim, the professor, said. Furthermore, investigations have uncovered nepotistic practices, like private schools’ preference for installing family members in teaching positions.

So why not fake it till you make it? In “Parasite,” the Kims’ son, Ki-woo, fluent in English, uses a referral from a privileged friend and counterfeit college credentials to trick the Parks into giving him a job as a language tutor for their teenage daughter. Ki-woo’s sister, Ki-jung, pretends to be an art therapist and gets hired to work with the Parks’ disturbed little boy. Dad and Mom soon join the subterfuge by posing as a professional driver and a housemaid for the Parks, who are as gullible as they are neurotic about cleanliness.

“Burning,” starring, from left, Yoo Ah-in, Jeon Jong-seo and Steven Yeun, was also a tale of haves and have-nots.

Last year’s “Burning,” from the director Lee Chang-dong, also portrayed the social divide in a dark story, in that case an awkward love triangle. Jongsu, a farmer’s son who dreams of being a writer, and Ben, an inexplicably wealthy man who drives a Porsche, both lust after the quirky Haemi. Even though Jongsu has a fling with Haemi, it becomes clear that this dirt spoon is no match for Ben, who offers Haemi entry into the gold-spoon club.

In “Snowpiercer,” another Bong film, the gap between the privileged and the disadvantaged couldn’t be more apparent. The postapocalyptic thriller puts Earth’s only human survivors on a train in perpetual motion, with the haves occupying luxurious cars toward the front, where they enjoy sushi, and the have-nots living in the tail end, where they feed on gelatinous protein blocks composed of cockroaches. The only way for the dirt spoons to improve their situation is to fight and kill their way to the front of the train. (Spoiler: Nobody wins.)

Some Korean films give social inequality a lighter parody treatment. “Extreme Job,” from the director Lee Byeong-heon, centers on a team of broke police officers who open a fried chicken restaurant as part of a sting operation to catch drug dealers. The restaurant becomes a booming success, and the officers quickly become distracted by their lucrative side hustle.

Frustration over social injustice in South Korea spilled over in 2016 largely because of corruption. That year, the country’s president, Park Geun-hye, was impeached over accusations of bribery, extortion and abuse of power. Central to Park’s ouster was the revelation that she had worked closely with Choi Soon-sil, who was convicted of conspiring with university officials and professors to help her daughter, Chung Yoo-ra, a student getting high marks despite rarely attending lectures or completing assignments.

For many Koreans, the scandals epitomized the dirty behavior and unfair advantages of the rich and powerful.

“Parasite” may resonate with South Koreans because it contains many references to current events there. One viewer, NaYeon Yang, a psychology student at the University of Maryland who moved to the United States from South Korea when she was a teenager, spotted several examples, like Ki-woo’s fake college credentials — an allusion to the Choi scandal. Chung, Choi’s daughter, used falsified records to graduate from high school.

More recently, crowds of protesters have called for the ouster of Cho Kuk, South Korea’s justice minister, who faces accusations of, among other things, pulling strings to help his daughter. Cho’s wife was indicted on a charge of forging a certificate to help their daughter get into medical school.

In another scene in “Parasite,” the wealthy father recoils from the stench of an impoverished man who is his loyal supporter. This may be a reference to the impeached president, who was seen on TV news hiding her hands behind her back when a supporter reached out to shake her hand. The incident went viral.

“I’m just fascinated by how he shrank all the things that recently happened in Korea and instilled that in his film,” Yang said about Bong.

“Snowpiercer,” “Burning” and “Parasite” all conclude on notes of nearly unbridled cynicism — doubt that things will get better for the disadvantaged. That may be a reflection of South Korea’s diminishing faith in its economy.

In his campaign pledge, Park’s successor, Moon Jae-in, promised to narrow the income gap by creating opportunities for the working class. As part of that effort, he raised taxes and increased the minimum wage. But the strategy isn’t working: The gap is continuing to widen, economic growth has slowed, and unemployment is on the rise. Moon’s approval rating plummeted from 84 percent in 2017 to 40 percent last month, according to a Gallup poll."