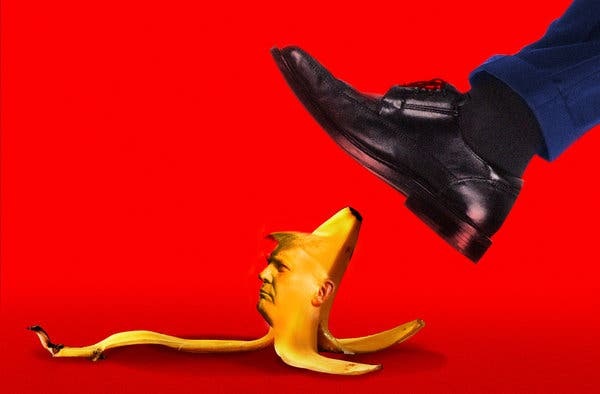 "Federal law expressly states that it is illegal for “a person to solicit, accept, or receive” anything of value from a foreign national in connection with a United States election.

Yet there stood President Trump outside the White House on Thursday, openly soliciting help from a foreign government for his re-election prospects by declaring to the assembled press that “China should start an investigation into the Bidens.” This, of course, after Mr. Trump has already become subject to an impeachment inquiry after implicating himself in a scheme to seek foreign help for his campaign in a conversation with the Ukrainian president, Volodymyr Zelensky.

This might seem self-defeating — “self-impeaching,” even. A United States president urging a foreign government to investigate his political rival would seem to be flagrantly violating the law, along with American notions of fair play and decency.

But this president is a master at what a former New York senator, Daniel Patrick Moynihan, called defining deviancy down. One baldfaced presidential lie, once exposed, is an outrage; a thousand such lies is a statistic.

Mr. Trump and his defenders are increasingly taking the position that what he did in pressuring the Ukrainian president was no big deal — the responsible course of action, even. Ergo, the more governments that Mr. Trump urges to do the same thing, the more normal, if not public-spirited, such aberrant presidential behavior will seem. The cynical marketing calculation — Mr. Trump’s favorite form of math — would seem to be that, as with previous administration outrages, the news media will grow weary, the public will grow numb, the Democratic inquisitors will appear ineffectual. Mr. Trump is also, of course, seeking to drag former Vice President Joe Biden and his son, Hunter, down to his level and implicate them in the same kind of self-dealing that he and his own family stand accused of.

This might work. But it also might not. There is no historical precedent for a president demanding that a foreign government investigate another American politician. If Mr. Trump has evidence of possible corruption overseas, his counsel should relay it to the Department of Justice and let the F.B.I. do its job, in coordination with its foreign counterparts.

Instead, Mr. Trump used his telephone conversation with Mr. Zelensky to pressure him to do Mr. Trump a “favor” and consult with Rudy Giuliani, serving as Mr. Trump’s personal lawyer and unofficial envoy, and the attorney general, William Barr, about digging up dirt on the Bidens. At that time, the United States, under direct orders from the president, was withholding nearly $400 million in military aid appropriated by Congress to help Ukraine defend itself against Russian encroachment on its eastern border.

Much remains unknown about how the various dots do or do not connect. But basic facts of the Ukraine approach are not in dispute. Nor can there be much question about what Mr. Trump so publicly asked China to do.

“I have zero problems with this phone call,” Mr. Graham said in a Sunday appearance on CBS’s “Face the Nation.” Among those hitting the same talking point have been Senator Ron Johnson of Wisconsin: “We all kind of looked at it and said, ‘There’s nothing here.’” And Senator James Risch of Idaho: “I saw nothing in the conversation that was inappropriate. We’re done here.”

This represents a stark reversal of Republicans’ position during the special counsel’s investigation of Russia’s meddling in the 2016 election. In that case, Republican lawmakers said that it would be troubling if there was clear evidence of collusion between the Trump campaign and Russia. Now, their new position seems to be: There can’t be anything untoward going on here because the president is being so blatant about soliciting foreign help.

Indeed, Mr. Trump seems to be operating on the assumption that the more shameless his assault on democratic norms and laws, the more he can get away with. This is not how the system works, no matter how fervently Mr. Trump’s Republican defenders may wish it so."