Opinion | Why Did Republicans Storm the Capitol? They’re Running Out of Options - The New York Times 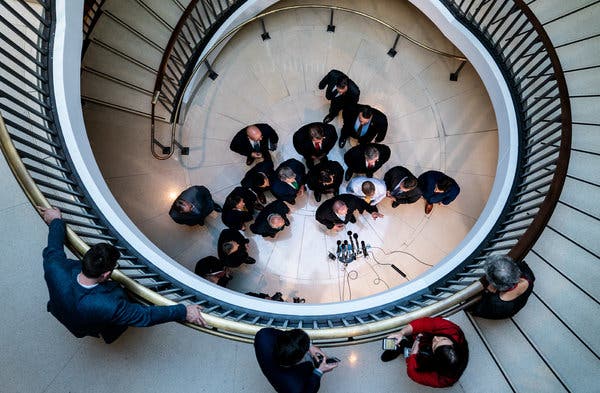 "Why Did Republicans Storm the Capitol? They’re Running Out of Options

As more testimony is disclosed, it becomes clearer that President Trump’s only defense against impeachment is to distract from the facts.

Around 10 a.m. Wednesday, a gaggle of conservative House members on Capitol Hill staged a “protest,” barging into the secure room — called a SCIF — where members of three House committees were preparing to hear testimony from Laura Cooper, a deputy assistant secretary of defense.

Shepherding the demonstrators was Representative Matt Gaetz of Florida, one of President Trump’s fiercest apologists, whose account live-tweeted the stunt: “BREAKING: I led over 30 of my colleagues into the SCIF where Adam Schiff is holding secret impeachment depositions. Still inside — more details to come.”

This was not a fringe move. Representative Steve Scalise, the minority whip, was among the sea of dark-blue suits that surged into the hearing room.

Chaos ensued. There were shouting matches. Some of the invading members brought along their cellphones, though they are prohibited inside the secure room. Ms. Cooper’s testimony was delayed, and Democrats called in the sergeant-at-arms for help restoring order.

Some time after 2 p.m., Mr. Scalise and several of his fellow protesters re-emerged to complain to the assembled media about the “Soviet-style tactics” of the inquiry.

The entire spectacle was a circus — which was the point. This was a publicity stunt aimed at delegitimizing the impeachment investigation that Mr. Trump and his defenders have portrayed as a partisan inquisition. If a few rules and national security precautions got violated along the way, so be it. Mr. Gaetz & Co. were happy to oblige a president who has demanded to be protected at all costs.

In fact, Mr. Trump is said to have given them a thumbs-up the day before. On Tuesday, he “met with about 30 House Republicans at the White House to talk about the situation in Syria and the impeachment inquiry,” at which time the members “shared their plans to storm into the secure room,” Bloomberg News reported. Mr. Trump told them he thought it was a good idea.

Why wouldn’t he? As more and more testimony is disclosed, it becomes clearer that the president’s only defense against impeachment is to distract from the facts and complain about how unfairly he’s being treated.

So many of the defenses he floated early on have crumbled under the weight of subsequent revelations.

He started out insisting that his July 25 phone call with President Volodymyr Zelensky of Ukraine, a central element of the impeachment inquiry, was “perfect” — only to have the notes on the conversation released by the White House reveal that he had told Mr. Zelensky to open a (baseless) investigation of a political rival, former Vice President Joe Biden, whose son had done business in Ukraine.

Mr. Trump has tried to spin what he did as a good thing. “As the President of the United States, I have an absolute right, perhaps even a duty, to investigate, or have investigated, CORRUPTION, and that would include asking, or suggesting, other Countries to help us out!” he tweeted on Oct. 3.

Except that, as members of his own administration continue to clarify, this wasn’t a broad effort to root out corruption. It was a targeted campaign to pressure a foreign government to interfere with an American election on Mr. Trump’s behalf — apparently by holding hostage nearly $400 million in military aid.

He and many of his defenders have clung to the idea that there was no “quid pro quo,” a position rebutted on Tuesday by the testimony of William Taylor, the top American diplomat in Ukraine.

Faced with this jaw-dropping account from the president’s own envoy, the White House press secretary, Stephanie Grisham, dismissed it as part of “a coordinated smear campaign from far-left lawmakers and radical unelected bureaucrats waging war on the Constitution.”

On Wednesday the president went further. He called Mr. Taylor “Never Trumper Diplomat Bill Taylor” in one tweet and declared in another: “The Never Trumper Republicans, though on respirators with not many left, are in certain ways worse and more dangerous for our Country than the Do Nothing Democrats. Watch out for them, they are human scum!”

But as the evidence piles up, it gets harder to paint this as some groundless conspiracy. So Mr. Trump has resorted to the schoolyard taunt: You can’t get me!

In a Tuesday evening appearance on Fox News, Matt Whitaker, a former acting attorney general, asserted there were no grounds for impeachment because “abuse of power” — the essence of an impeachable offense — “is not a crime.”

That added to the uneasy sense that the president’s main impeachment defense may be that he is beyond the reach of the law.

On Monday, after a bipartisan outcry had prompted Mr. Trump to cancel plans to host the Group of 7 summit at his Miami golf resort next year, he griped to reporters about “this phony emoluments clause” — a reference to a part of the Constitution designed to limit corruption.

In federal court on Wednesday, his lawyer, while arguing that New York City prosecutors should not be allowed to obtain the president’s tax records, said that Mr. Trump cannot be prosecuted, or even investigated, for any offense — including shooting someone “in the middle of Fifth Avenue” — while in office.

Despite claims by the president and his die-hards, Democrats are not conducting “secret,” “Soviet-style” proceedings. At this stage, witness interviews are being conducted in private, with public hearings to be held later. This may not please Republicans, but it is not a sinister miscarriage of justice.

There are, in fact, plenty of good reasons Democrats are operating behind closed doors for now. The House’s impeachment inquiry is not a trial. It is more akin to a grand jury proceeding, where information is gathered and considered for the purposes of handing up an indictment. Any trial would be held in the Senate, with Mr. Trump represented by lawyers able to make all the substantive and process challenges he liked.

On Wednesday, Representative Jim Jordan of Ohio complained that Republicans were demonstrating out of frustration “at the idea that they can’t be a part of this.” Nonsense. Republicans are in every hearing room that Democrats are in and able to ask their own questions. During Mr. Taylor’s testimony Tuesday, Mr. Jordan had praised the Republican lawyers for their questioning of the witness.

Accusing Democrats of mishandling the process certainly fits with Mr. Trump’s enduring sense of victimhood. The strategy also works to inflame the party’s base against the opposing team, while allowing Republican lawmakers to avoid defending Mr. Trump’s behavior."

But, mostly, it’s about all they’ve got."

Opinion | Why Did Republicans Storm the Capitol? They’re Running Out of Options - The New York Times
Posted by John H Armwood II at 9:40 AM